While I love corny intros like that, it feels even better to play that after reading that Adirondack, Kalamazoo, Maine, Norfolk, and Reading have announced their opening night dates and opponents. The last 52 weeks have been a long, tough slog for those clubs, after having to shut down for the pandemic last season, and forced to opt-out this season due to local regulations. It will be incredible to see many good people return to work and have fans back in their arenas.

If there has been anything that we can take from the last year, it’s that sports are the undefeated champion in perpetuity of creating the diversion. We didn’t realize we needed sports that much until we were without them. Tomorrow will mark the one-year anniversary of Rudy Gobert‘s positive test for COVID, which led to the shutdown of the sports world, and one could surmise, the shutdown of normal life in America. In the 48 hours that ensued, we saw everything come to a screeching halt and were left in this awful malaise of trying to carry on with our lives in an incredibly uneasy time, with no outlet. As we hunkered down for the next seven weeks, we were left to watch classic games, iRacing, and other programs to try and fill the time, something to create a diversion. It wasn’t until mid-May before NASCAR came back, mid-June before the PGA resumed, and late July before the MLB started, and NBA & NHL finished out their seasons.

We are still living through a treacherous period in our history, but sports have been there each day since mid-May to help us get through it. More importantly, minor league sports will be there en masse next season to help us properly honor those who cared for us, filled our prescriptions and grocery shelves, and so many more who were essential workers during this horrific time in our history.

I cannot recall being more excited for a new season to start than I am for the 2021-22 season to get going.

The State of the ECHL Playoff Races:

The ECHL season will surpass the four-month mark this week, and as teams approach the half-way mark of their schedules, it’s time to look at the state of the Kelly Cup Playoff races.

In the East, Florida and Indy appear to be the odds-on favorites to make the playoffs, with point percentages above .700. The dogfight comes in the 3-6 spots, where Orlando, South Carolina, Greenville, and Jacksonville are battling it out. Here’s a look at the standings in the East, along with the remaining strength of schedule for the top-six teams, since Wheeling is unlikely to make the playoffs at the present time:

Out West, Fort Wayne and Wichita appear to be the odds-on favorites to make the playoffs, with each team having a points percentage above .700. Allen appears to be comfortable, too, with a .648 points percentage. The race comes in the 4-6 positions, where three teams are separated by seven standings points. Unlike the East, everyone out here is still in playoff contention. Here’s a look at the standings in the East, along with the remaining strength of schedule for each team:

In this conference, the Rush have the toughest remaining schedule, with an average opponent point percentage of .611. At the opposite end of the spectrum, Allen has the “easiest” with a .541 strength of schedule.

There is so much that can happen between now and the end of the season, but the Strength of Schedule provides a good look at which team has the biggest hill to climb if they are to hold on or move into a playoff position.

We’ll give the scheduling brains in the league office a pass on the schedule for this year, but playing a team more than 12 times in a season is excessive. That said, here’s our stat of the week:

High % of total games played against one team with record against that team:

Add to that stat the games remaining between the teams mentioned above:

Aaron Luchuk (Orlando): The 23-year-old forward continued his point streak last weekend against the Florida Everblades, posting six more points (2G, 4A) and extending the streak to 11 games, the second-longest in the league this year (13 – Anthony Beauregard). For the season, the third-year pro sits in fourth-place in league scoring with 28 points (8G, 28A) and has 100 career ECHL points in 107 games.

Clint Windsor (Orlando): For the second week in a row, the Orlando Solar Bears netminder has won the league Goalie of the Week. Last week, he went 2-0-0 with a 1.01 goals-against average and a save percentage of .973 in two appearances against Florida. The 27-year-old stopped all 29 shots he faced in a 3-0 win on Friday for his first shutout of the season and set a personal season-high with 42 saves in a 5-2 victory on Sunday. 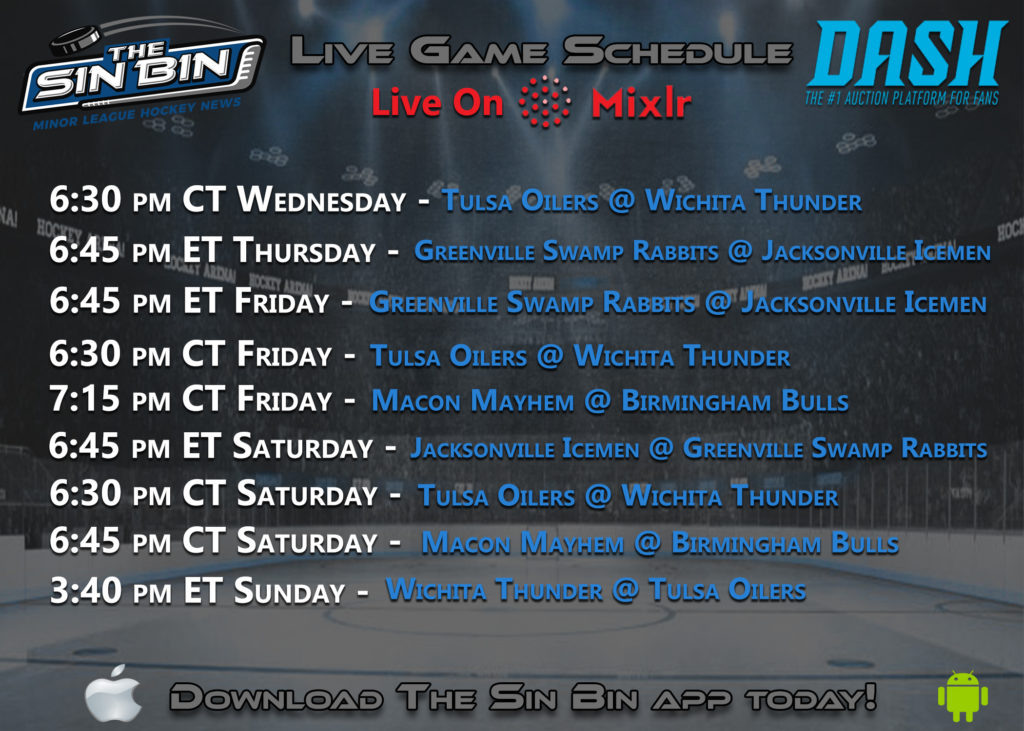