WICHITA, Kan. – Welcome back to another installment of Monday Headlines, where we look back at the previous weekend of ECHL action and give you some headlines from across the league.

Before I get into the headlines, I want to apologize for not having this feature out last week. Some personal issues came up that needed my attention and by the time I sat down to write the article, it was too late. Thankfully, though, those issues have been cleared up and we’re good to go.

Now, let’s get after it.

After getting through the first five weeks of the season with just two game postponements due to COVID-related protocol, the sixth weekend of the 2020-21 ECHL season was a tough one to take.

If you’re keeping score at home, six games (including this afternoon’s Jacksonville/South Carolina game) were postponed this weekend due to COVID-related protocol. More concerning, at least 18 players have been added to the league’s COVID list in the last week. The number may be higher because some teams do not place players on the list for differing reasons.

For those worried this is going to lead to another league shut down, don’t be. Postponements and players being added to the list were planned for and more of this will happen. But, teams and the league are doing everything in their power to ensure players and immediate staff are safe and cared for if someone contracts the virus.

As one GM told me, it’s better to get this out of the way now, so we don’t have to worry about it later in the season. Here’s hoping that is the case.

One of the big things for fans and media to key in on this year is points percentage, which is how the playoff spots will be decided since there will be an imbalance in the number of games played. It will be more important than ever for teams to get points by hook or by crook; a regulation loss by one goal is just the same as a regulation loss by ten.

Over the last nine games, no team has done a better job of getting points by any means necessary than the Greenville Swamp Rabbits. At the start of play on Monday, the Swamp Rabbits have a points percentage of .577 (fourth-best in the Eastern Conference), has collected 13 of 18 points in the streak, and have not lost in regulation since December 19, when they were handed a 5-1 loss by the Florida Everblades. The current point streak is the longest by the Swamp Rabbits since the 2017-18 season.

Two of the key cogs to the success of the Swamp Rabbits offensively have been rookies Greg Meireles and Max Zimmer, a pair of rookies who checked into the lineup in late December. The move to insert them into the lineup by head coach Andrew Lord has paid off. Both Meireles and Zimmer have seven-game point streaks, where Meireles has nine points (3G, 6A) and Zimmer has eight points (5G, 3A). In net, Ryan Bednard has been solid between the pipes for the Rabbits, going 3-0-1-1 during the streak, while John Lethemon has gone 1-0-2-1.

Greenville puts their streak on the line with a four-game set against the Orlando Solar Bears Wednesday night in Orlando. You can hear the game live on The Sin Bin app.

The Greenville Swamp Rabbits are 4-0-0-2 in six games against the South Carolina Stingrays this season.

John McCarron (Florida): The sixth-year forward and second-year Captain of the Everblades had a weekend against the Orlando Solar Bears. In two games, McCarron potted five points (3G, 2A). So far this season, McCarron has 12 points (7G, 5A) in 14 games played.

It’s a jam-packed week for live games on The Sin Bin app. Check out the lineup: 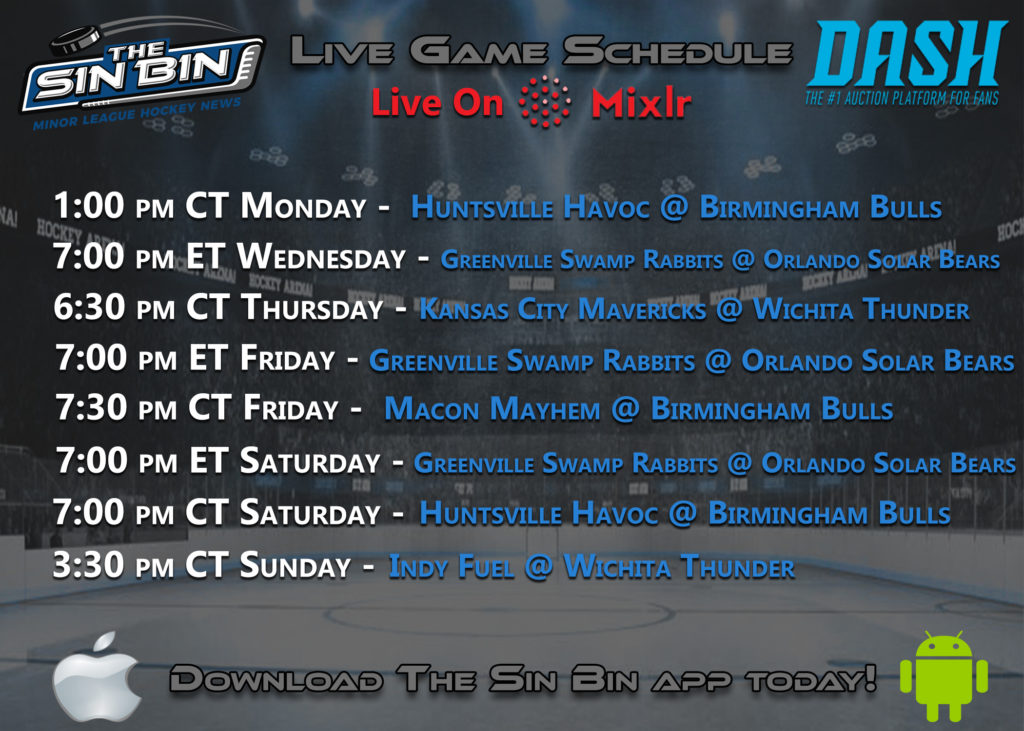