You may not have seen the news Sunday evening in all the Super Bowl hubbub, but minor league hockey and hockey, in general, lost a titan. Colorado Eagles owner Ralph Backstrom passed away at the age of 83.

While many know Backstrom as the Colorado Eagles owner, it is even more important to recognize his accomplishments before launching the Eagles. He played in 1,336 NHL/WHL games, had 892 career points (378G, 514A), and won six Stanley Cups, all with the Montreal Canadiens. In fact, Backstrom is only one of nine players to have their names inscribed on the silver chalice more than a half-dozen times.

After a Hall of Fame career on the ice, Backstrom moved into the collegiate coaching ranks and helped hockey explode in Denver, leading the University of Denver to a Frozen Four appearance in 1986.

In the mid-90s, Backstrom helped launch Roller Hockey International. While the league had trouble sticking around, the rules of the sport help govern roller hockey even today.

In 2002, Backstrom founded the Colorado Eagles, and since hitting the ice in 2003, the franchise has had remarkable success. Rare is it that one franchise moves up the minor league hockey ladder, even rarer that it happens in the span of 15 years. After spending nine seasons in the Central Hockey League, winning two titles, the Eagles moved to the ECHL in 2012. After many good regular seasons but sputtering in the playoffs, the Eagles finally broke through and won back-to-back Kelly Cup championships in 2017 & 2018 before moving to the AHL. More importantly, the Eagles have created an incredible atmosphere for watching a hockey game and a fanbase that is a tightly-knit family.

In 2007, he retired from hockey after 53 years in the sport as a player, coach, owner, and founder. He was elected to the Colorado Sports Hall of Fame in 2008 and was awarded the ECHL’s Lifetime Achievement Award in 2013 in recognition of a career spent growing the sport of hockey.

Backstrom is survived by his wife Janet, daughter Diana and sons Andrew and Martin.

Rest well, and thank you, Ralph.

Lack of ECHL Player Assignments at Start of AHL Season:

After a layoff spanning more than 325 days, the 2021 American Hockey League got started Friday night. If you are one to peruse the ECHL Transaction wire, you may have noticed some glaring omissions in the days leading up to the start of the season, a dearth of players being sent down to ECHL teams once AHL camps disbanded.

There are a multitude of reasons for this, but it appears the main cause for the lack of send downs to ECHL clubs is due to the taxi squad situation in the National Hockey League. First, with teams the threat of injuries and quarantine looming large, AHL clubs have kept a few extra players that normally would be in the ECHL around for this season. Next, keep in mind that quarantining would be a possibility for those who get called up from the ECHL to the AHL on an emergency basis with various state rules and the ongoing issues with the Canadian border. Finally, and perhaps most importantly, having contracted players up with their AHL team gives teams a great chance to get a good evaluation of players.

The caliber of play in the ECHL’s first nine weeks has been really high, but it remains to be seen if that stays the case going forward. For those who are fans of this level of play, the good news is two-fold; one, AHL teams will likely re-assign players once their respective seasons have drawn to a close; two, we could see some free agents that are in the SPHL or overseas “come home” and play with new clubs in the ECHL.

If you’re a home team, playing on a Friday, you’ve had a tough go recently. In the last four Friday night slates (a combined 16 games), the home teams are a combined 1-9-4-2, with the Utah Grizzlies scoring the lone home Friday night win on January 15.

The last three Friday nights have been even rougher for the home side, with teams going a combined 0-8-3-1 and three shutouts, two of which coming from Rapid City netminder David Tendeck.

According to the ECHL, there is no such record of it happening before.

Stefan Fournier (Wichita): The veteran forward posted four points (2G, 2A) Saturday night and a six-point weekend for Wichita, as they moved to the top of the Western Conference table, after taking two of three games against the Allen Americans. Fournier is coming off a career-high 42 points last season for Wichita and has 14 points (9G, 5A) in 14 games for the club this season.

Brad Barone (Utah): The Grizzlies netminder was rock solid this weekend, stopping 67 of 71 shots faced as Utah took both games of their weekend set against the Kansas City Mavericks. On the season, Barone is 4-0-0-1, with a 2.16 goals against average, a .931 save percentage. For his career, the netminder from Boston College is 12-9-3-3, with a 2.86 goals against average and a .908 save percentage. 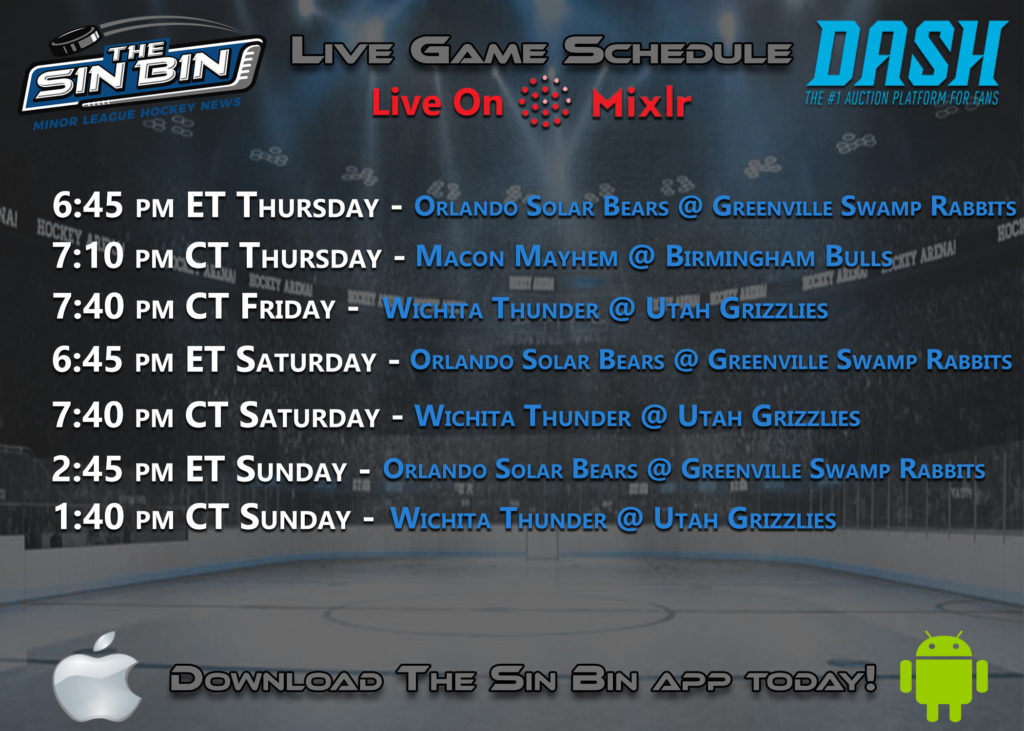