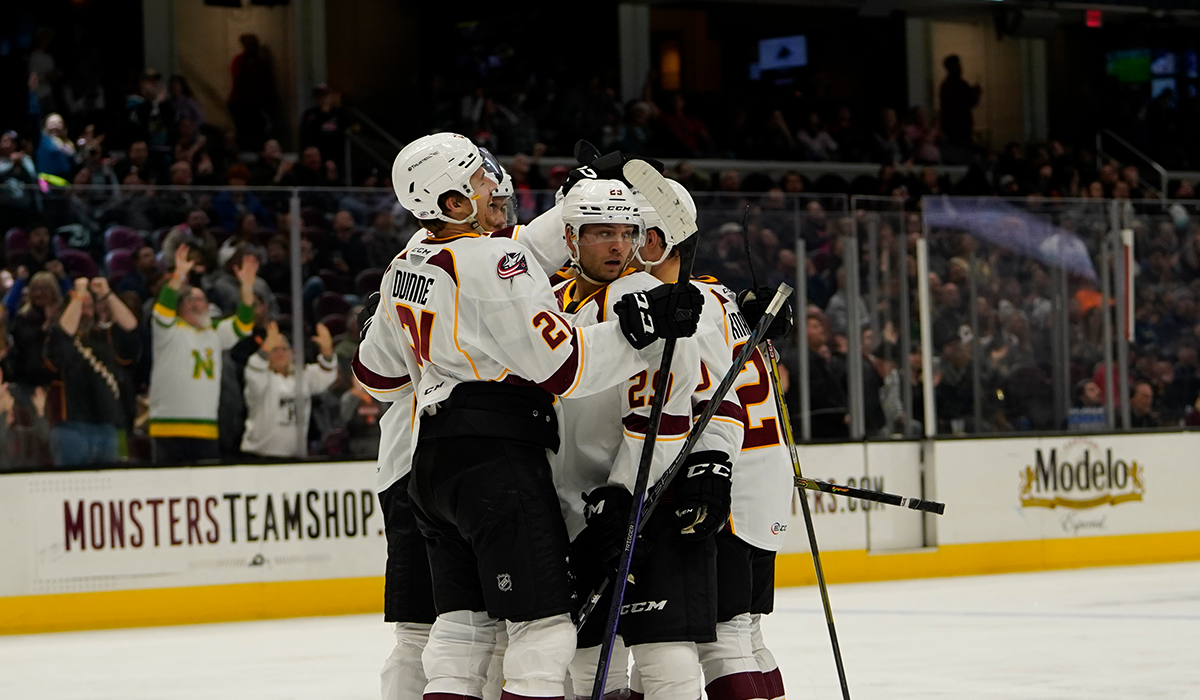 CLEVELAND – The Cleveland Monsters welcomed the Rochester Americans to Rocket Mortgage Fieldhouse last week for an exciting pair of games between two of the North’s top three teams. Perhaps even more exciting is the first installment of the “Monday Monster Mash,” a comprehensive look back at the week’s action for the Cleveland Monsters. We’ll have an analysis of whose stock is on the rise and falling, a look at what’s to come in the week ahead, plus news and notes from one of the most explosive teams in the AHL.

The Week That Was

It’s always a good time when the Amerks make their way to Cleveland to take on the hometown Monsters, and this time around was certainly no exception. Cleveland was able to take three out of four points against the second-place Americans, losing by a score of 4-3 on Thursday in overtime, and besting the Amerks by the same score on Saturday. Let’s take a look at how it happened.

The Monsters led the Americans in most stat categories for the better half of the night, but found themselves down a goal with less than a minute left. Cue none other than Joona Luoto, who continued his early-season dominance by tying the game up at the 19:11 mark of the third.

LUOTO TIES IT UP WITH JUST UNDER A MINUTE LEFT!!!! pic.twitter.com/fYI43eEo8b

Although Cleveland outshot Rochester 34-27, went 1-for-5 with the man advantage, and kept the Amerks’ powerplay unit at bay. Though, they weren’t able to keep the explosive Amerks’ offense from ending the Monsters’ night in heartbreak when Jeremy Davies netted his second of the night with only eight seconds remaining in the overtime period, giving Rochester the win in the first of two matchups in three days. Usual suspects Brendan Gaunce and Emil Bemstrom found the back of the net, while Kirill Marchenko snagged another multi-point game with two assists.

Jet Greaves returned to the net for the Monsters as they looked for revenge following a tough overtime loss on Thursday. It didn’t take long for Cleveland to hit the gas pedal. Josh Dunne got the scoring going on Saturday, putting away a rebound off of an Owen Sillinger shot that Michael Houser was unable to handle.

Quick start for the Monsters. Owen Sillinger streaked down the wing. Michael Houser was unable to handle the puck, leaving it open for (I think) Sillinger to stuff his own rebound home.

In arena, crediting it to Josh Dunne with a Sillinger assist.

This one was back and forth for the first two periods, as to be expected when these two foes get together on the ice.

Sean Malone was able to tie it up for the Amerks at the 3:11 mark of the first, but Joona Luoto added to his series tally with his fourth goal in three games, giving the Monsters a one-goal lead heading into the first intermission.

Cleveland was able to kill a Roman Ahcan tripping minor in the second, ultimately blanking the Amerks’ power play for the two-game matchup, a considerable victory for a Cleveland penalty kill that ranks 30th in the AHL.

Brandon Biro was able to bring Rochester to level with the Monsters with 6:11 remaining in the second. Not to be forgotten, Brendan Gaunce gave Cleveland the lead at 18:36 of the second – they don’t ask how, they just ask how many.

After some extended zome time, the Monsters finally hit twine once again.

Kiril Marchenko with the huge windup. The puck took a pinball's journey, bouncing off at least 1 Rochester stick and Brendan Gaunce's shinpad before going in the net.

Cleveland didn’t look back after Gaunce’s second goal in as many games, extending his point streak to five games. Robbie Payne netted his first goal of the season to extend Cleveland’s lead to 4-2, which was shortly followed by Biro’s second of the game, bringing the Amerks back to within one goal with over half of the third period remaining.

The back half of the third period featured stout defending, with both teams knowing just how important the next goal was.

Luckily for the Monsters, the next goal never came, and the Monsters were able to grab the victory, securing points in their last three.

The Week to Come

Who doesn’t love a road trip to the east side of Pennsylvania? This trip is all business, with a lot of blue-collar work. The Monsters will turn their focus to a three-in-three, with a Friday matchup against the Wilkes-Barre/Scranton Penguins before heading to the Giant Center to take on the Hershey Bears in back-to-back games Saturday and Sunday.

The Monsters will be looking for revenge against the Penguins, who stepped on the gas pedal in their October 26 matchup, thwarting the Monsters by a tally of 5-1. If one word can describe the Wilkes-Barre/Scranton Penguins, it’s stingy. The Penguins are in the top five of the AHL in goals-against, and Dustin Tokarski looks as good as ever, posting a 2.04 goals-against average and a .904 save percentage this season. Cleveland will have to lean heavily on their league-leading power-play unit to snag a win against the Penguins – when this high-power offense and tough defense meet up, something will have to give.

The tall order gets even taller when the Monsters travel to the nation’s chocolate capital to take on a Bears team that would be leading any other division in the AHL – the Atlantic may have already claimed the season’s title for strongest division.

The Bears have won seven of their last ten, and if you think that the Penguins play a defensively-sound style of hockey, let me introduce you to the Bears. Second only to the Ontario Reign, the Bears win many of their games by holding their opponents to less than three goals. Surely, Hershey will be looking to rebound from a tough weekend loss against their in-state rivals, the Wilkes-Barre/Scranton Penguins, where they allowed a whopping seven goals for the first time this season – to put it into perspective, they allowed 1/7 of their goals against in one game. In fact, 17 of Hershey’s goals-against have been scored by the Penguins. The Monsters will be looking to match the Penguins’ energy.

Look for Daniil Tarasov and Jet Greaves to share the net this weekend after the Monsters sent Pavel Cajan down to the ECHL’s Kalamazoo Wings. Greaves has certainly been admirable in the driver’s seat in the crease, but the Monsters have to be happy to have their starter back down after the goaltenders in Columbus finally seem to be healthy…knock on wood.

Well, we knew it was coming, and on Monday, it became a reality. The Columbus Blue Jackets announced that Kirill Marchenko has been called up to join the NHL squad.

Let’s be clear – this is obviously an exciting moment for Marchenko. The NHL is absolutely where he belongs. But, if the club manages Marchenko the way that they have managed some of their other young talent, it may not be long before he’s back in Cleveland. The only way Columbus can justify this call-up is if they plan on giving Marchenko middle-six minutes at the very least. Calling him up to plant him on the fourth line, like Columbus has done with players such as Liam Foudy and Trey Fix-Wolansky (more momentarily,) will be an injustice to Marchenko’s talent and his development. Marchenko will likely make his NHL debut on Tuesday against the Pittsburgh Penguins.

Fix it. We’ll end every Monsters Monday Mash with some interesting news, notes, and perspectives from the team, as well as from yours truly. Let’s start by taking a look up at the NHL’s Columbus Blue Jackets, where Trey Fix-Wolansky has been a healthy scratch for the last two games in Columbus. Now, the first draft of this article discussed how important it was for Columbus to send Fix-Wolansky back down to Cleveland where he could get meaningful minutes and continue on his development trend – thankfully, that draft will never see the light of day, as the Columbus Blue Jackets reassigned Fix-Wolansky back to Cleveland, where he will slot into the first line almost immediately, replacing Marchenko who has been playing big minutes for the Monsters.

If It’s Not Broke…

Although the Monsters sit in the middle of the pack in the overall AHL standings, they find themselves sitting pretty at third in the North Division, which is all that really matters at this point in the season. Head coach Trent Vogelhuber is happy with where his guys are at to start the season, especially given how young of a group he has suiting up every night.

“I mean, the work is never done, especially with a young group. You’re teaching and when you think it’s understood, you have to go back and reteach it and you feel like you’re saying the same things over and over all the time, but they need to hear it, you know, and I try to simplify the game as much as possible. But, it’s been a solid, solid quarter. We’ve got a really good group, which is the most important thing, [good] group of people and guys, we enjoy being around each other.”

Of course, there are areas that Vogelhuber surely wants his team to tighten up, but the points keep coming in, and the standings speak for themselves. Cleveland’s first quarter has been defined by the number of call-ups and injuries they’ve had to work with. The entire blue line has been decimated, to some extent, by the injuries up in Columbus, and yet, this team keeps finding ways to be competitive and rack up the points. Now that the goaltending appears to be where the Monsters want it, it will be interesting to see if they’re able to string together some more consistency night in and night out, but you can’t say this team isn’t putting in the work.

Vogelhuber and the Monsters will hope win number 11 comes against the Penguins on Friday.

You can follow Jeremy Paul on Twitter @FPHMonsters! For the latest news on the American Hockey League, be sure to follow our AHL team and listen to The Holy GrAHL Podcast each week!