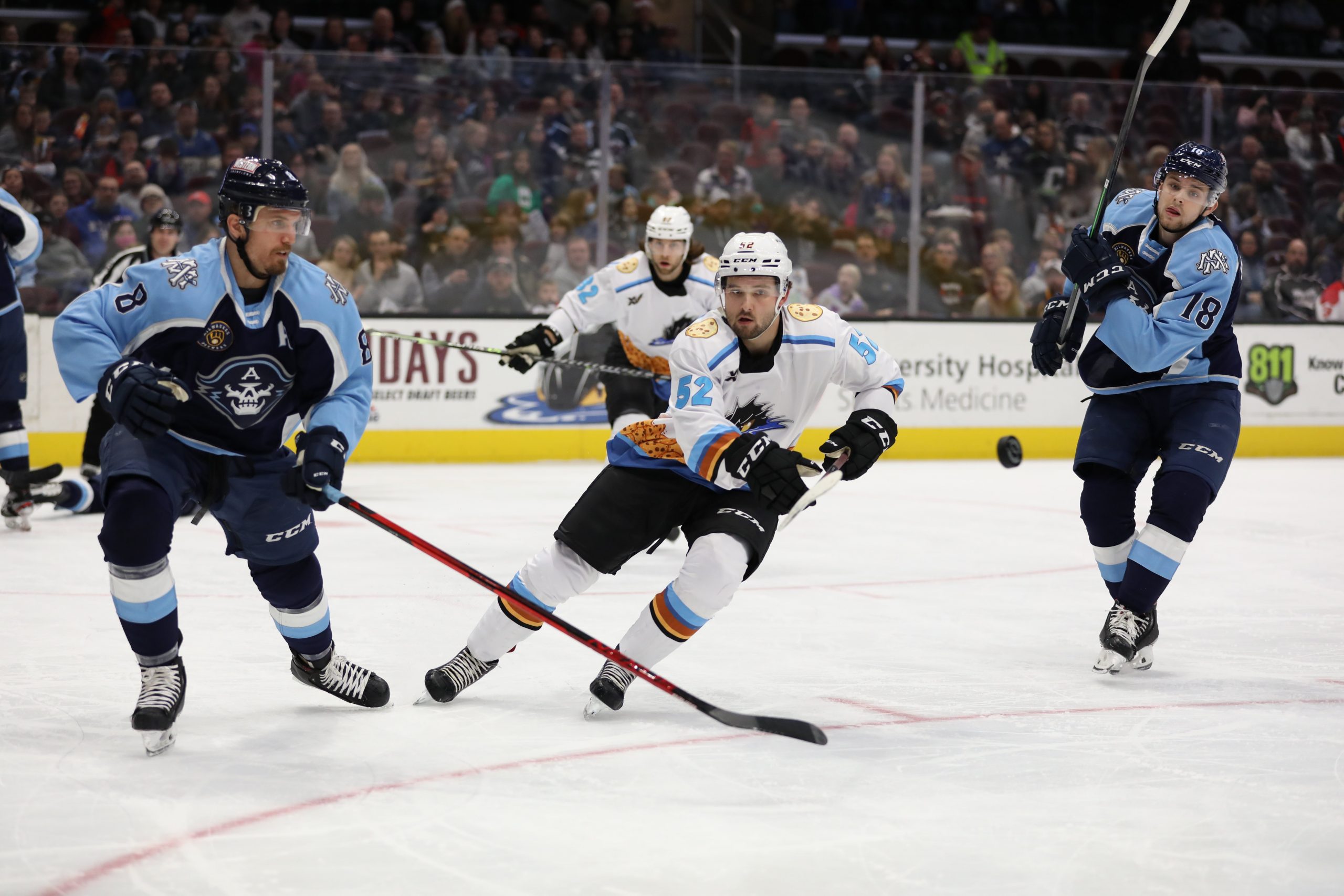 CLEVELAND – It was a game celebrating National Cookie Day, complete with specialty jerseys and cookies to benefit A Special Wish. Though, all attention was turned on how well the Cleveland Monsters would respond to a dismal Friday night showing against the Milwaukee Admirals.

While Cleveland had a much better recipe on Saturday, Milwaukee came away as the victor with a 5-4 regulation victory.

The first period started with a BANG, literally. Where the physicality ended on the first half of this weekend series, the back half looked to be just the same.

Checks, board battles, and hits reigned supreme, all to the benefit of the Milwaukee Admirals. Their collective stature is intimidating by itself. However, when you throw in their physical play and tenacity, you have to wonder how they are sitting firmly at the bottom of the Central Division.

Three goals by Milwaukee in just 4:02 of gameplay zapped the collective spirit out of the crowd and, seemingly, the players. Miscues, missed assignments, and miscommunication all led to the goals by Matt Luff, Kole Sherwood, and Mitch McLain.

Call it aggravation. Call it nerves. Call it a pile of crumbled cookies. But, by any name, it was a concerning 17 minutes to start the game.

Then, Trey Fix-Wolansky, on a very unsuspecting play, coasted in front of Milwaukee’s goaltender, Connor Ingram, and got Cleveland on the board. That energized the crowd, but the Monsters were short on celebration and quickly lined back up for the next faceoff. But, of course, when you are down by three goals, there is no time to be happy about just one singular tally.

Trey unassisted. Taking advantage of the turnover by Egor Afanasyev. AHLTV with the clip pic.twitter.com/zwmd8v0uAj

Milwaukee gave Cleveland a golden opportunity late in the first, courtesy of a Graham Knott hooking call and a bench minor for too many men just 50 seconds later.

This would send the Monsters into the second period with 37 seconds of 5-on-3 time and down 3-1.

Cleveland looked to dive into the extra stash of “A Special Wish” cookies during the first intermission as they came out buzzing.

First, they capitalized on the 5-on-3 power play, thanks to controlled, calculated movement. Emil Bemstrom took his time, found a lane, and fired the puck past Ingram. Though he doesn’t officially get on the score sheet for this, Tyler Sikura should get an honorary assist. After all, he set a perfect screen to keep Ingram out of the play.

After that, the Monsters took off on what looked to be a sugar buzz. They flew around the ice, eluding most of the heavy hits that Milwaukee stunned them with the last four periods.

2:04 after the power-play tally, Justin Scott tied this one up at 3 with a perfect snipe on a two-on-one breakaway. He had Adam Helewka as an option, with only Matt Tennyson and Ingram standing in the way.

And don’t look now, goaltender Greaves is on a two-game points streak!

The sugar-fueled frenzy continued as the Monsters outskated the Admirals most of the period.

As the second wore on, the game felt more loose and chippy as both teams started to play the mind game, all attempting to agitate the opposition.

At 12:16, Josh Dunne looked to have the go-ahead goal for Cleveland off a beautiful feed from Brett Gallant, but it ended up flitting just wide, thanks to Ingram’s glove. 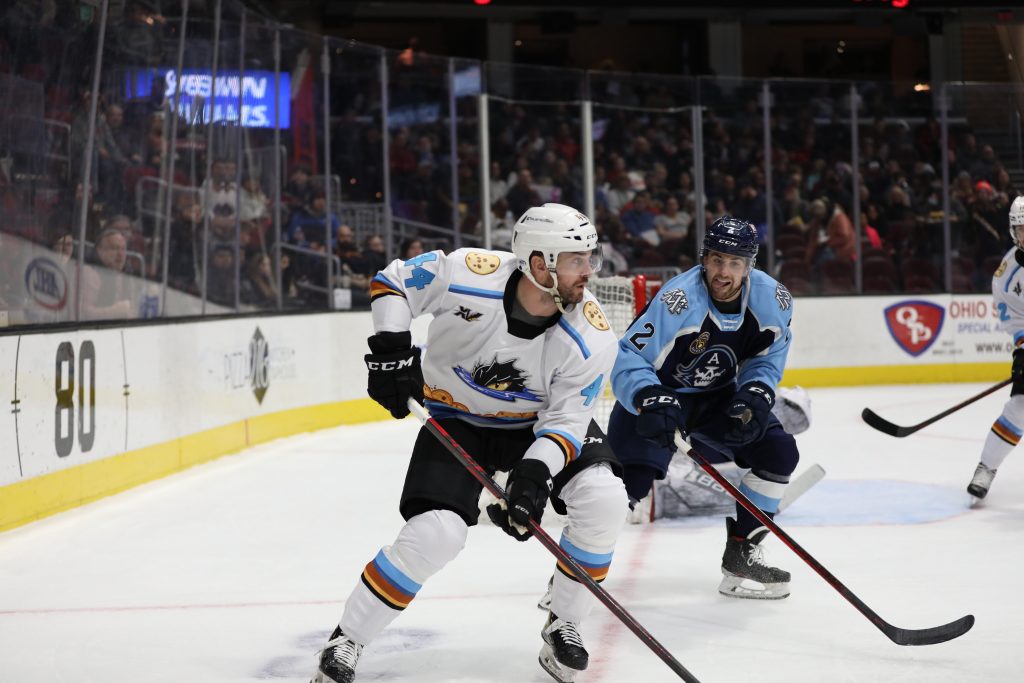 Ultimately, Milwaukee would regain the lead on the power play seven seconds after the penalty call. Cleveland lost the defensive zone faceoff. A little bit of a give and go later, Jeremey Davies lasered the puck in from downtown and found Cole Smith, who got the deflection.

That would send this one to the third, with Milwaukee ahead 4-3.

The third found Milwaukee luring the Monsters away from their speed and forced them to play physically again.

Milwaukee would pull away for the final time at 5:21. A broken play led to Joseph LaBate closing in on Greaves, with Cole Cassels in the way. LaBate fired a heater right off Cassels’ ankle, causing Cassels to go down in a heap. As Cassels was down on the ice and sliding back towards Greaves, LaBate corralled the puck and slid it in the net for the 5-3 tally.

Milwaukee kept the pressure and seemed to frazzle Cleveland once again. About 5:50 after their last goal, Cole Schneider and Sherwood broke out on a two-on-none breakaway. After a collective gasp from the 7,302 fans at the Rocket Mortgage FieldHouse, Greaves somehow made a sprawling lunge block to keep his team in the game.

That singular save injected some flavor and life back into the Monsters. They found a way to thank Greaves not even two minutes later by bringing the score back within one. After an extended shift in the Milwaukee zone, Dunne found himself in a crowd, but the puck was lying untouched at his feet. Then, in a flash, he had his stick down and made this a one-goal game.

Cleveland would get back to their game in the closing minutes. They even killed a four-on-three man disadvantage with their two most experienced defensemen, Jake Christiansen and Thomas Schemitsch, in the box.

Despite a flurry of shots at the end, Milwaukee had the better overall recipe and walked away with the prize.

Overall, it was Cleveland straying from their true strength, which is speed and skill, that did them in. When they tried to outskate the Admirals, that’s when the goals came. Hopefully, that’s a lesson learned and they can be more confident in their own skills moving forward.

Silly Stat of the Night

Sherwood has two goals on the season. Both of them have come at Rocket Mortgage FieldHouse. Both goals came as a member of a completely different team.

Postgame, Cleveland assistant coach, Trent Vogelhuber, reflected on the back-to-back series and the struggles that plagued the Monsters:

“I think yesterday, we saw a pretty rough adjustment from Toronto to Milwaukee. They are two really different teams—Milwaukee’s big and physical. And to be honest, we probably weren’t ready for that after three games against Toronto, which is a little bit smaller, faster, and skilled. There wasn’t a whole lot of physicality on the ice. It maybe took us by surprise a little bit last night, but I thought we were ready for it tonight. I like our group. We’re still learning and building and trying to get consistency. We’ve shown we can play both sides, which will be good down the stretch.”

Cleveland gets one night off before heading right back onto the ice. Up next? The Grand Rapids Griffins on Monday night at the Rocket Mortgage FieldHouse.