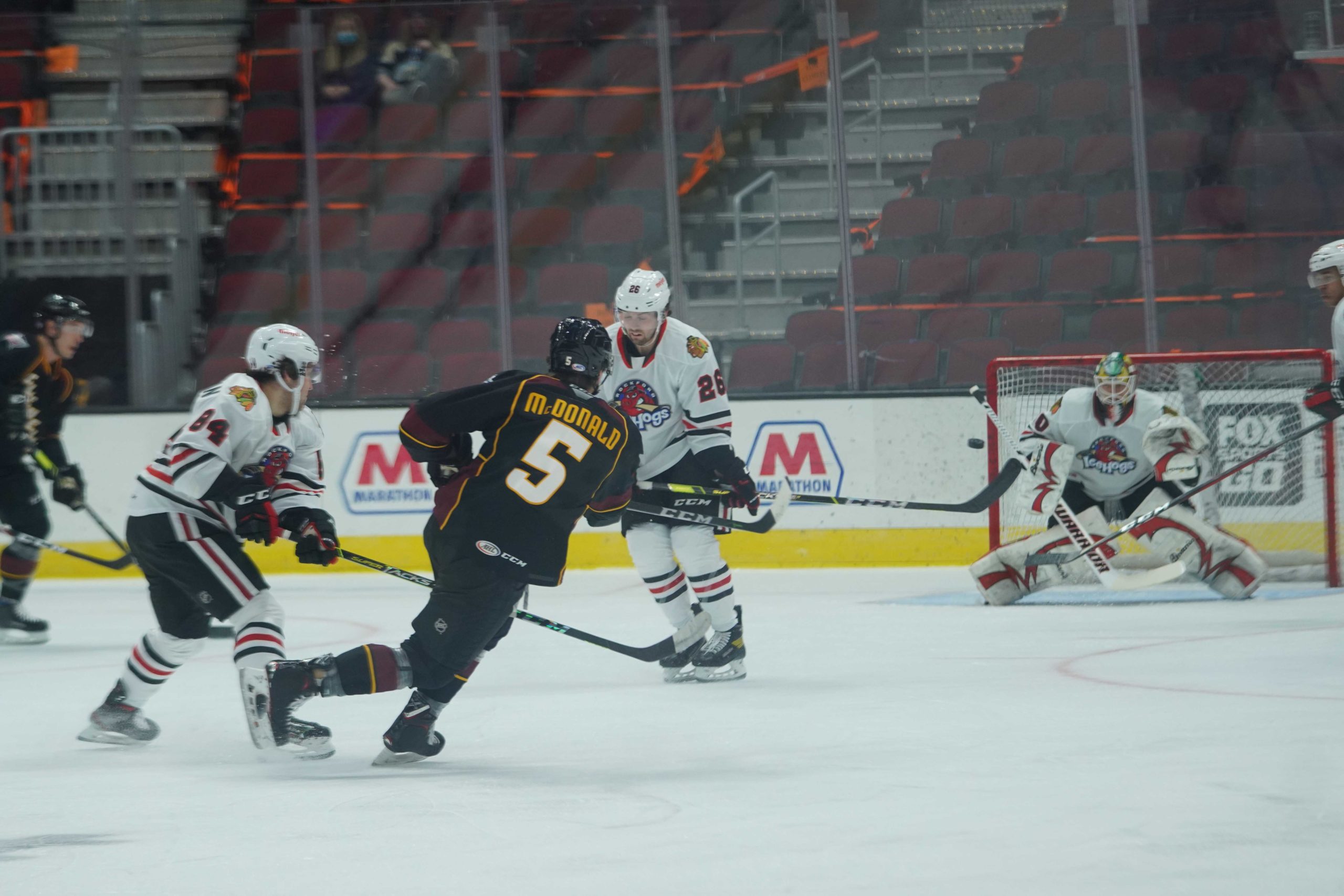 CLEVELAND – The odds seemed to be stacked against the Cleveland Monsters before their game against the Rockford IceHogs even started on Saturday night. Following the recall of forwards Zac Dalpe and Ryan MacInnis to the Columbus Blue Jackets taxi squad, they headed into a back-to-back series without their top two centers. Then, heading into Saturday night’s showdown , the hockey gods still were not looking to stack any in their favor.

Injuries kept forwards like Tyler Angle, Liam Foudy, and Kole Sherwood out of the game. When the puck dropped, the Monsters were able to ice just only 10 forwards and 6 defensemen.

Despite the short bench, Cleveland managed to control the tempo early on. With goaltender Matiss Kivlenieks making his first start of the season, they limited opportunities early. This allowed Kivelnieks time and space to get comfortable back on North American ice.

With barely three minutes gone, Cleveland began to really put the pressure on Rockford goaltender Collin Delia, whose goal stick was lying in pieces in the corner. A miscue in front of Delia caused the puck to bounce off Carson Meyer’s skate and right on Nick Lappin’s stick, who popped it in the net. Perhaps the highlight of that goal was a leaping Adam Helewka, who banked about 500 frequent flier miles on that jump. That goal was Lappin’s first of the season and first with the Monsters.

Lappin looked to be closing in on his second of the night, not even two minutes later. On a breakaway courtesy of a stretch pass by Andrew Peeke, he closed in on Delia. The two came together, sending Lappin hard into the boards. He labored off the ice and was unable to return. That made Cleveland’s forward count fall to nine.

In a game where the bench is as short as it was for Cleveland, every player needed to contribute. Well, with 12:35 remaining in the first, Meyer, Connor McDonald, and veteran forward Brett Gallant picked up where Lappin left off. McDonald worked the puck along the blue line in the IceHogs zone. He passed it to Meyer, who was behind the net. Meyer had some tough work along the boards with Isaak Phillips breathing down his neck. Somehow, he spotted Gallant rushing into the zone from the bench. One clean feed through traffic later, and Gallant snapped it behind Delia.

Great work by Connor McDonald to keep the play alive. He feeds it to Carson Meyer who passes it through traffic to Brett Gallant. He streaks in off the bench and flips it home. The fan-favorite makes it 2-0 here in Cleveland.

Rockford’s frustration started to show, and unfortunately, Dillon Simpson was on the receiving end. While helping to clear the zone in front of Kivlenieks, Simpson took several checks up high on his back from Reese Johnson. He quickly left the ice and went down the tunnel. That left just five defensemen, and 14 skaters total for Cleveland.

After the first, Cleveland held the advantage in the score (2-0), while Rockford led in shots (10-9).

Two things became quickly evident in the second. First- the Monsters defensemen all have a hard shot from the blue line, and they are not afraid to use it. Second- the IceHogs youth was showing a distinct disconnect in their passes.

The first high-danger chance of the period came from Gallant, who cranked a shot on Delia. Delia saw it coming and gathered it squarely in the chest. Gallant was a breath of fresh air in this game and looked fairly mobile and smart with every play. For an enforcer that once would find himself in the penalty box quite often, he helped give the Monsters much-needed power and drive.

Though, the young and hungry IceHogs would not be denied. In a classic case of “right place, right time,” MacKenzie Entwistle and Sikura were tied up in front of Kivlenieks. Entwistle broke free and found a bouncing puck from Cody Franson’s shot. He shoves it home and cuts the deficit 2-1.

While the first was for the veterans, the Monsters youth came to play in the second. After taking a tripping penalty, Zach Jordan got open on his return from the ice. Evan Polei caught him in full stride, where Jordan confidently gathers the puck, skated into the zone, and lifted the puck past Delia for his first AHL goal and Cleveland’s third of the night at 11:42.

Fresh out of the box, Zach Jordan goes in full flight and settles an Evan Polei stretch pass. He lifts it past Delia for his first AHL goal.

Then, Sikura took his turn on the score sheet. He was in his usual spot down low and to the side of the goalie. McDonald rocketed a shot on net, which bounced off Delia and right onto Sikura’s stick. One flick of the stick later, it is 4-1 Monsters.

Rockford hit the ice for the third with a chip on their shoulder and fire in their eyes. Whether it was Phillips with multiple pole checks to prevent a Monsters forward from getting on a breakaway, John Quenneville’s fancy footwork, or heavy shots from Entwhistle, Dylan McLaughlin, and Matej Chalupa, the IceHogs came to play in the third.

It was actually a McLaughlin shot from point-blank range that ricocheted off Kivelenieks to Chalupa that gave Rockford their second goal, coming at 3:20.

Up to this point, all the goals were five on five. After Alec Regula was called for tripping, Cleveland’s Trey Fix-Wolansky decided to showcase the Cleveland power play. He tallied a one-timer shot from Gavin Bayreuther just 10 seconds into the man advantage.

After the game, Fix-Wolansky spoke to the magic touch the power play had in this game.

“It’s been great so far. I think everyone knows their jobs on the power play. Sikura is great in front of the net. Gerbe makes great plays with the puck. Fortunately, I’ve just been able to get open for shots and been able to find the net.”

Regula had the best redemption arc and netted a goal of his own, not even two minutes later. Cleveland still had the 5-3 lead at 5:19.

At this point, many would think Cleveland would be slowing down and getting tired with such a short bench. As this play by Evan Polei showed, that simply wasn’t the case.

Evan Polei with a perfect showcase on how to protect the puck with your body. He almost made it 6-3 but Delia with a big save.#RFDvsCLE pic.twitter.com/lWbMLciwK0

Fix-Wolansky would get the night’s final goal with his second of the night, again on the power play. Both he and Bayreuther found themselves wide open- Bayreuther up high, and Fix-Wolansky in the left circle. Meyer fed the puck to Fix-Wolansky, who was able to take his time and pick the perfect shot. Monsters lead 6-3 with 5:09 remaining in the game.

The score would hold after a gutsy and inspired penalty kill to close the game. Cleveland came away with the victory, 6-3, in front of 2,720 fans.

After the game, Cleveland head coach Mike Eaves had nothing but praise for his group of players.

“Every once in a while, it seems that you’re the underdog. We were the underdog in terms of numbers on the bench. The guys rose to the occasion. It is really fun to be a part of that. The guys deserve a lot of credit. Played an intelligent game and played hard when they had to.”

The Rockford IceHogs and Cleveland Monsters close out their four-game series this afternoon at 1:00 pm in Cleveland.