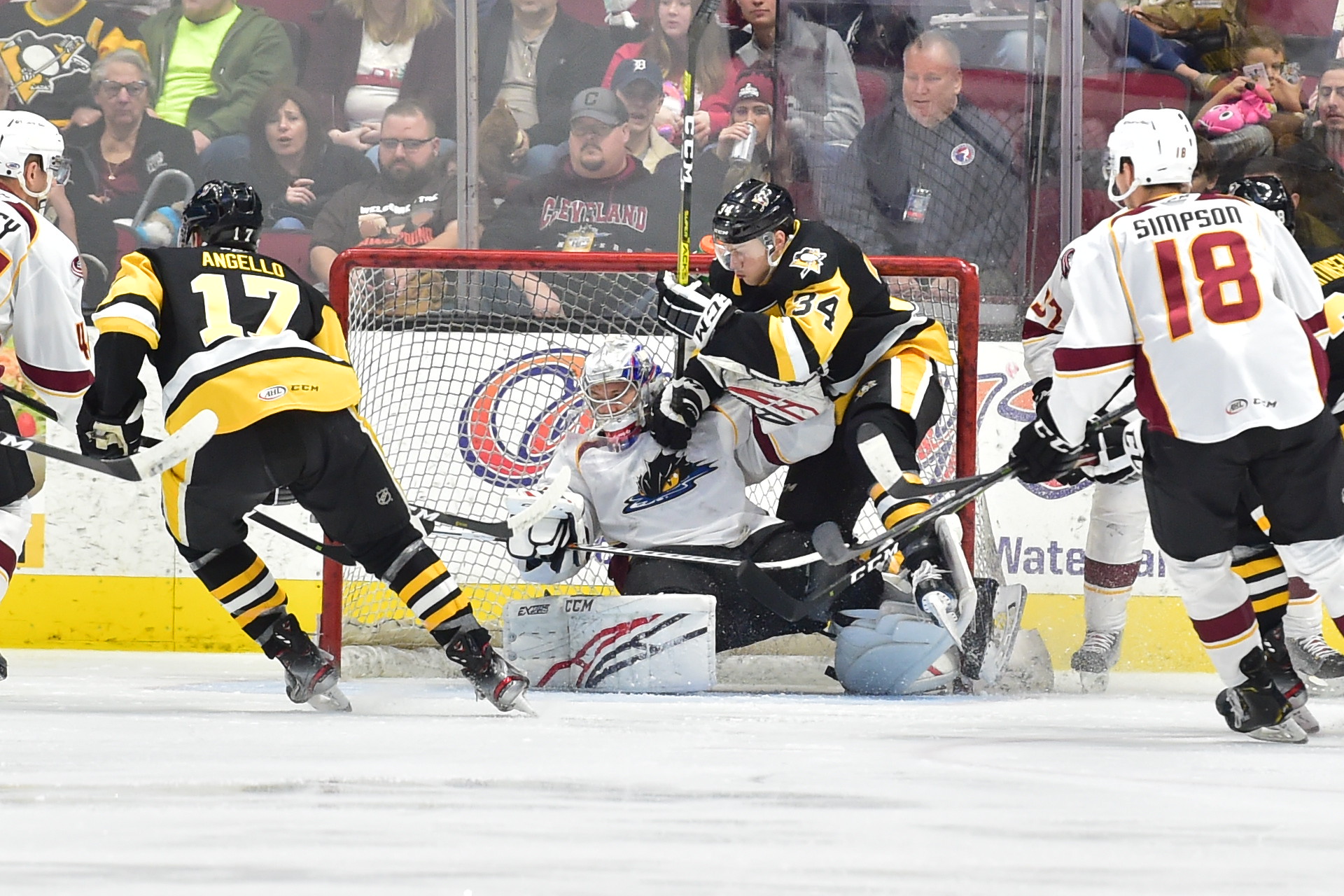 CLEVELAND – There was palpable excitement in the air on Saturday night as the Cleveland Monsters hosted the Wilkes-Barre/Scranton Penguins for their second game in two nights.

CLEVELAND – There was palpable excitement in the air on Saturday night as the Cleveland Monsters hosted the Wilkes-Barre/Scranton Penguins for their second game in two nights. The 11,567 fans in attendance were armed with bags full of stuffed animals, all in anticipation for the annual Chuck-A-Bear game. While they had to wait, their patience was eventually rewarded.

The first period started pretty hesitantly for both sides. Given the Monsters dominant 4-0 performance on Friday night, it was obvious that each team were just trying to feel each other out. The more the period went on, the more anxious the fans got. It almost seemed as if the Monsters were channeling the nervousness of the crowd.
As the period went on, the Penguins started to dictate the pace, both through speed and physicality. This bumped up the energy of the game, with players starting to lay more hits.
The first goal of the night went to the Penguins’ Anthony Angello. He swooped down low on Monsters goaltender Veini Vehvilainen while Doyle Somerby provided heavy pressure to try and knock Angello off the puck. Angello got a shot on Vehvilainen’s right leg pad, with the puck trickling down to his foot and bouncing away from his skate. Angello saw the bounce and was able to tuck it in behind Vehvilainen’s skate blade. At 9:02, the score is 1-0 Penguins.
As the puck dropped on the second frame, the physicality skyrocketed. Each team were laying heavy checks and skaters made hard plays along the boards. There were a few scary moments, including a heavy hit on the Monsters’ Anton Karlsson, causing him to fall into Vehvilainen. They were both a little slow to get up but remained in the game.
Despite multiple chances at open shooting lanes, Cleveland seemed to pass more than shoot. After the game, Monsters Head Coach Mike Eaves was asked about it.

“We talk about a concept that is called TWIG — Take What Is Given. They have to make that decision (to shoot or pass) at the moment of truth. I thought, especially in the first period, there was some moments of truth. We weren’t very good and we just handled it. That’s something that you got to trust your players and you got to understand what they’re looking at.”

At 8:40 of the second period, Angello doubled the lead for the Penguins. He initially shot the puck into heavy traffic, where it was blocked by Dillon Simpson. The puck ricocheted right back to Angello, where he scooped it up and launched it back on net for the score.
Then, the moment Monsters fans had been waiting for finally came at 14:25 of the middle frame. Simpson was waiting above the right faceoff dot. Jakob Lilja passed the puck along the boards to Adam Clendening. He then passed it to a wide open Simpson, who cradled the puck and then launched it on net. Marko Dano was posted up in front of Penguins goaltender Dustin Tokarski. The puck flew in the net, completely unseen by Tokarski.
Pandemonium filled the stands as stuffed animals started raining down from the stands. In total, 8,672 bears, dogs, unicorns, dinosaurs, and more hit the ice. The Chuck-A-Bear goal seemed to calm the Monsters down. Their play became noticeably more loose and confident. 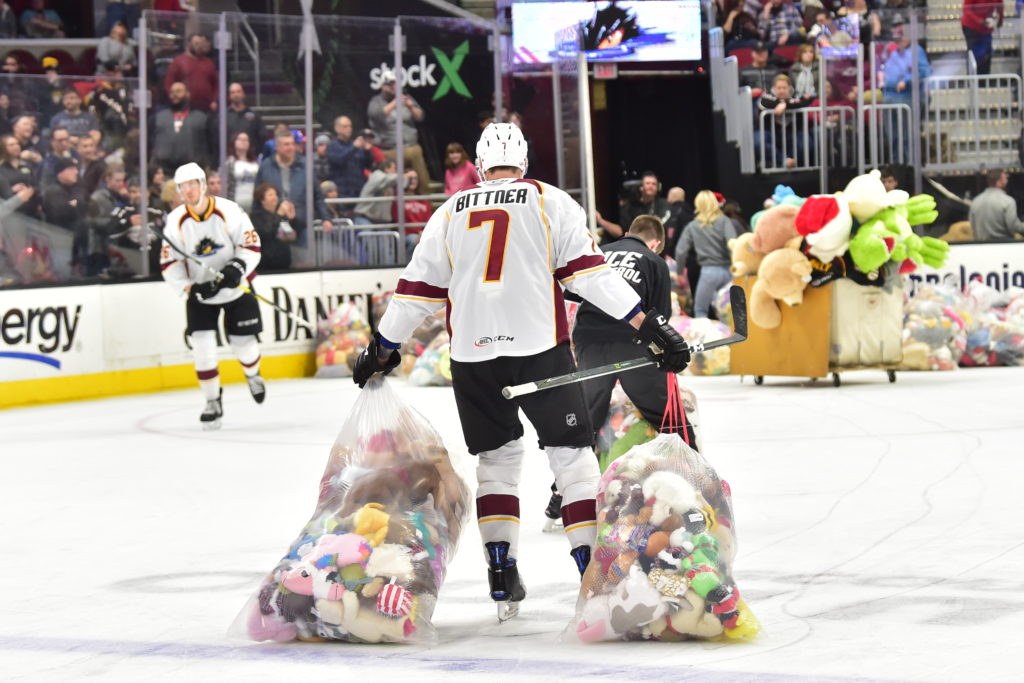 Dano has solidified himself as a great asset when it comes to net front presence. In the last week or so, there are at least three goals that can be credit to his efforts in screening the opposing goalie. In the second intermission interview, Dillon Simpson was highly complementary of Dano. Simpson commented on how the screen was a huge part of that goal and how much it help when the goalies “have no idea where the puck is coming from”.
Eaves commented post-game about how it is not only Dano that is being encouraged to block shots; it is a concept they are pushing on the team as a whole.

“The goaltenders at this level are so good. If they are going to see the puck, they are going to stop it. Part of our job in the offensive zone…we call it net front presence, having an anchor there. he can take [the goalie’s] eyes away. If it goes in the corner or goes behind the net, they can release and get it. So, it’s a big part of what we want to do in the offensive zone, and Marko’s very good at it.”

Another noticeable player in the second was Monsters forward Trey Fix-Wolansky. He has proven that he has just as much grit as he does skill. Throughout the second, he brought high levels of energy and was heavily involved in the physical game.
Throughout the third period, the Monsters sustained pressure in their offensive zone. They had many quality shots, but in the end, they could not finish their chances.
With only 55 seconds remaining, the Penguins secured the win, 3-1, after Thomas Di Pauli tallied an empty-net goal.
Vehvilainen had 26 saves in the loss while Tokarski had 27 saves in the win.
The Monsters return to action on Friday night at 8:00pm CT against the Milwaukee Admirals at UW-Milwaukee Panther Arena.

Be sure to give Deana a follow on Twitter for live, in-game coverage and overall coverage of the Cleveland Monsters! Don’t forget to give a “like” to The Sin Bin on Facebook for all minor league hockey news from the AHL, ECHL, and the SPHL!