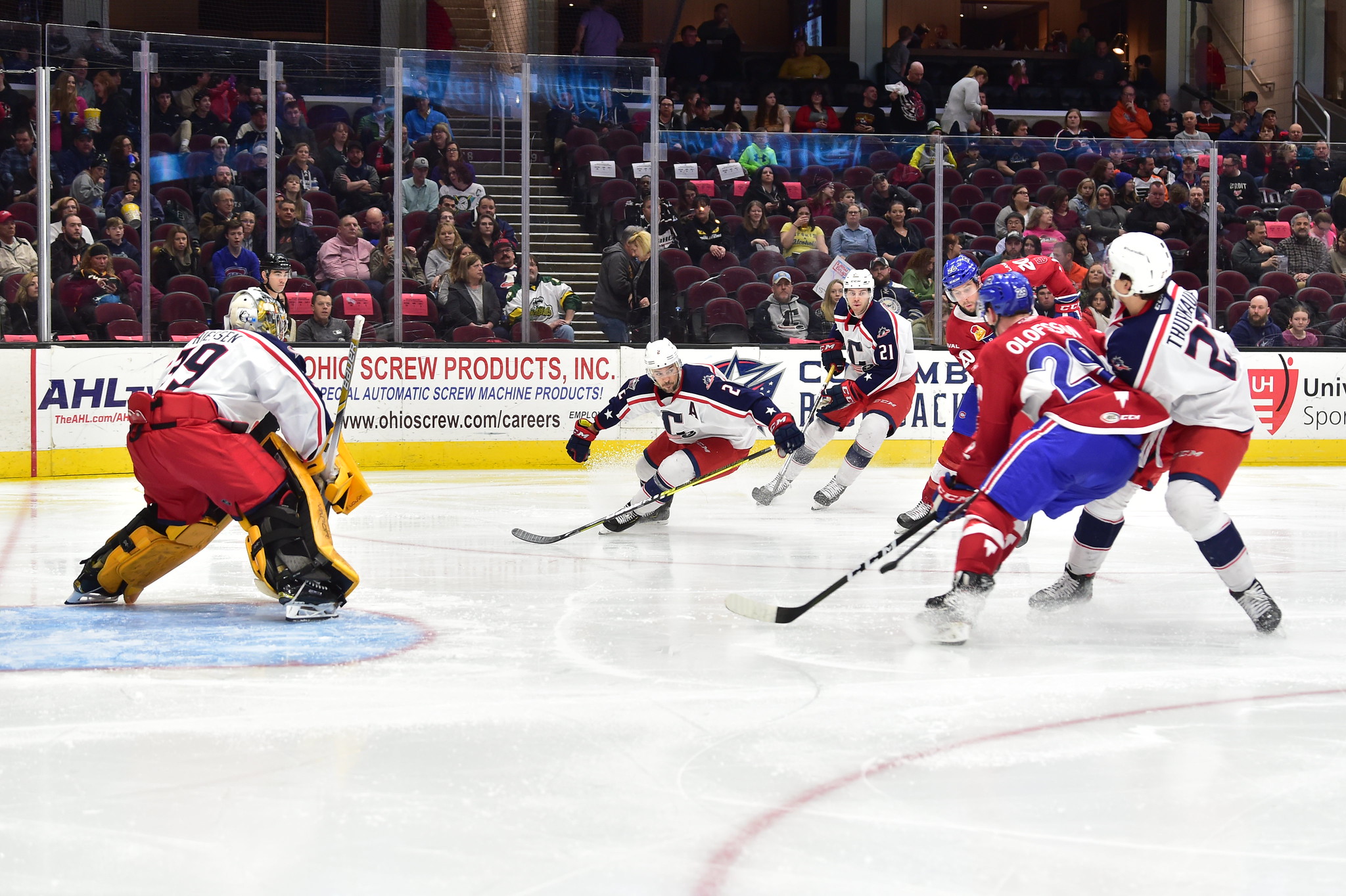 CLEVELAND – Closing out both the weekend and season series, the Cleveland Monsters and Laval Rocket faced off Friday night at Rocket Mortgage FieldHouse in front of 13,056 fans.

CLEVELAND – Closing out both the weekend and season series, the Cleveland Monsters and Laval Rocket faced off Friday night at Rocket Mortgage FieldHouse in front of 13,056 fans. In a night where the Monsters honored Oliver Bjorkstrand‘s 2016 Calder Cup championship-winning goal, they were hoping to rekindle some of that same magic.

Throughout the first period, Monsters goaltender Brad Thiessen served as a calming and reassuring presence. To call his work in the crease impressive, especially against the posts, would be a colossal understatement. While the Rocket swarmed, Thiessen rose to the occasion and kept the Monsters in the game.
Both teams were hesitant and cautious in the early moments of the game. Following an emotional and aggressive end to Thursday night’s matchup, each team seemed to be waiting for the other to make the first move.
The first move ended up coming at 3:06, when Laval’s Gustav Olofsson was called for interference. While the Monsters got ready to set up on the power play, Marko Dano took an unfortunately timed tripping call. Laval dominated the entirety of the period of 4-on-4 play, not allowing the Monsters to gain possession for more than a few seconds at a time.
However, the Monsters best scoring opportunity of the first came while on their 10-second penalty kill. Trey Fix-Wolansky got the puck on a turnover and raced in on Laval goaltender Michael McNiven, who expertly made the difficult save.
Laval increased the physical play afterword, being led by Jesperi Kotkaniemi. With hard play along the boards, he was making thundering hits on several Monsters players, all in rapid succession. Needless to say, Cleveland’s Brett Gallant noticed and made it known that his team would not tolerate that in their arena. With a hard hit, he takes down Kotkaniemi. Shortly after, he left the game, not returning after the end of the first.
Despite the high level of shots by Laval in the first (seven on the net and many more attempts), Thiessen could count on his defense to help him out. Most notably, Doyle Somerby managed to use his back to block a hard slap shot on a wide-open net, keeping the scored locked at zero at the end of the first.

To start the second period, the Monsters came out with speed, emotion, and intensity. However, passion soon turned into frustration. As the period progressed, their passes seemed more erratic, and clearing attempts turned into tension-relieving slappers to the end boards.
This resulted in a 5-on-3 man advantage for Laval, as Cleveland took a too many men penalty (served by Gallant) followed by a tripping penalty on Derek Barach about 90 seconds later. Thanks to Thiessen (and remarkable play by the penalty kill units), the Monsters kill off both penalties.
However, Laval took a 1-0 lead, as Laurent Dauphin connected with Joe Cox, who redirected the shot past a sprawling Thiessen.
About five minutes later, Yannick Veilleux forced a turnover against Branden Troock and set his team up on a rush back to their offensive zone. Veilleux regained possession and flipped it past Thiessen for the 2-0 lead.
With tension and frustration building, Cleveland received their fifth power play of the night off a Will Pelletier high-sticking call with 1:12 remaining. Barach shot a puck on net through traffic, with Dillion Simpson and Dano battling to get the rebound in on McNiven. Simpson connectied and got the Monsters on the board with 6.3 seconds left in the period. 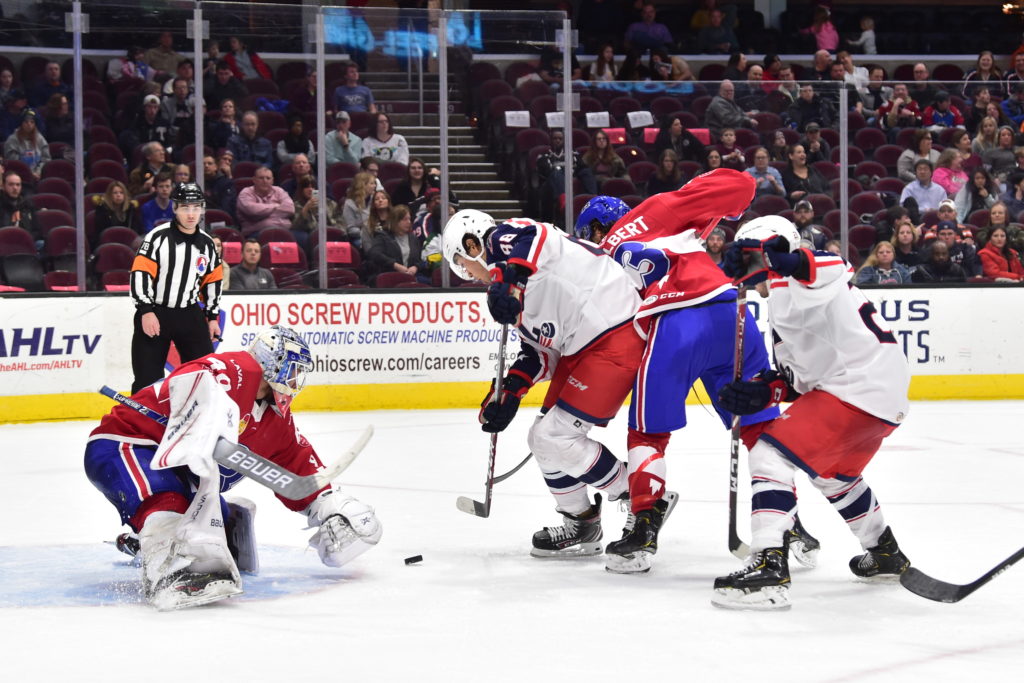 Laval struck early in the third with a shot by Jake Lucchini finding daylight over Thiessen’s shoulder. At 2:04, Laval took the 3-1 lead. From that point on, the momentum stayed solely with the Rocket.
Lucchini tallied his second of the night at 11:56 with a tip-in off a bouncing puck. This deficit seemed to get under the Monsters’ skin, resulting in an increased showing of frustration and aggravation.
Lindsay Sparks attempted to inject his team with life by laying an enormous hit on Dauphin. Dauphin took exception, and Gallant stepped in to take this fight. Since he was late into the tussle, Gallant was issued a game misconduct for continuing altercation.
A late tally by Cox on the power play finished up the game with the Laval Rocket emerging victorious by a score of 5-1.
Thiessen had 19 saves in the loss to McNiven’s 20.

The Monsters return to action on Tuesday at 7:00 pm EST against the Charlotte Checkers at Bojangles’ Coliseum.
Follow Deana on Twitter for live, in-game coverage and news & notes throughout the week concerning the Cleveland Monsters! Don’t forget to also follow The Sin Bin on Twitter and Facebook for all additional AHL, ECHL, and SPHL minor league hockey coverage and insights!