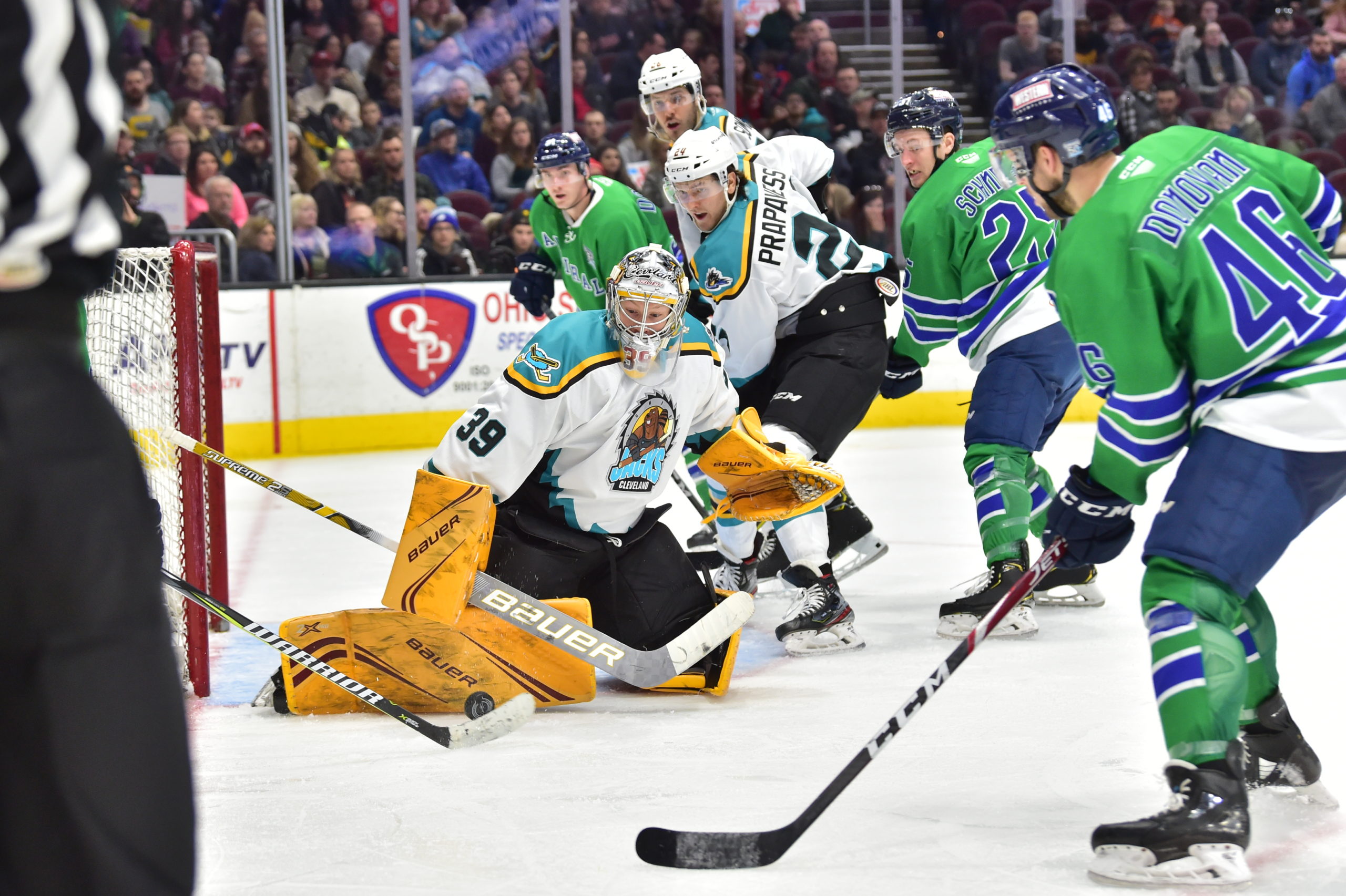 CLEVELAND- In a weekend dedicated to honoring the past, the Cleveland Monsters — or should I say, Lumberjacks — looked to make a statement both on and off the ice.

CLEVELAND – In a weekend dedicated to honoring the past, the Cleveland Monsters — or should I say, Lumberjacks — looked to make a statement both on and off the ice. Rallying behind veteran netminder Brad Thiessen, the Monsters played as a team and found a way to upset the American Hockey League’s number one Milwaukee Admirals on Saturday afternoon in front of 11,387 fans at Rocket Mortgage Field House.

Following the NHL recall of goaltender Matiss Kievlenieks, Thiessen was called in for service. This was his first start since April of 2019. Though he is technically the third goaltender on the roster, he’s serviced more as a coach for the young Kivlenieks and Veini Vehvilainen. It is a definite advantage to the Monsters to have a veteran like Thiessen on standby, especially one that the team knows and trusts.

“It’s fun, anytime you can get those competitive juices flowing again and get out there with the guys. It’s fun to be a part of and always more fun when you win, too.” -Brad Thiessen

Thiessen’s experience and conditioning were cruicial as the Monsters struggled early on, especially on the power play. The Admirals maintained solid possession and put the Monsters defense and goalie to the test.
However, with just 1:24 remaining in the first, Daniel Carr of the Admirals solved “Brick Wall Brad”. Skating through the right faceoff circle and sneaking by Monsters defenseman Adam Clendening, Carr sniped it past Thiessen for the 1-0 lead.
In the second period, the Monsters came out en force. Throwing checks and increasing the intensity, Cleveland was looking to send a message that they were not going to go away quietly or easily.
Monsters forward Trey Fix-Wolansky tied it up at 3:02 into the second. Linemate Paul Bittner set the screen in front of goalie Troy Grosenick, allowing Fix-Wolansky time to find the perfect shot. Bittner scooted to the side to try and pull Grosenick off the shot and Fix-Wolansky just let it rip, firing it home for the goal.
Head Coach Mike Eaves talked postgame about Fix-Wolansky and what he brings to their team:

The Monsters were not done yet. While PA announcer Jasen Sokal was announcing Fix-Wolansky’s goal, Derek Barach posted himself down low. Marko Dano, in his first game back since suffering an injury, set up Barach. He then sniped the puck in the net on his backhand. Monsters take the 2-1 lead at 4:05 of the second.
Throughout most of the second, the Monsters maintained momentum both on and off the puck. This all changed when Kole Sherwood took a slashing penalty late in the period. Though Thiessen was peppered with shots, he was able to stand tall. However, the Admirals tied it up on the power play from an Anthony Richard tip on a hard Tommy Novak shot.
Then, with just 11 seconds left in the second period, Admirals forward Frederick Gaudreau regained the lead at 3-2. Clendening put on the jets and almost caught up with him, but ended up in the net with the puck. 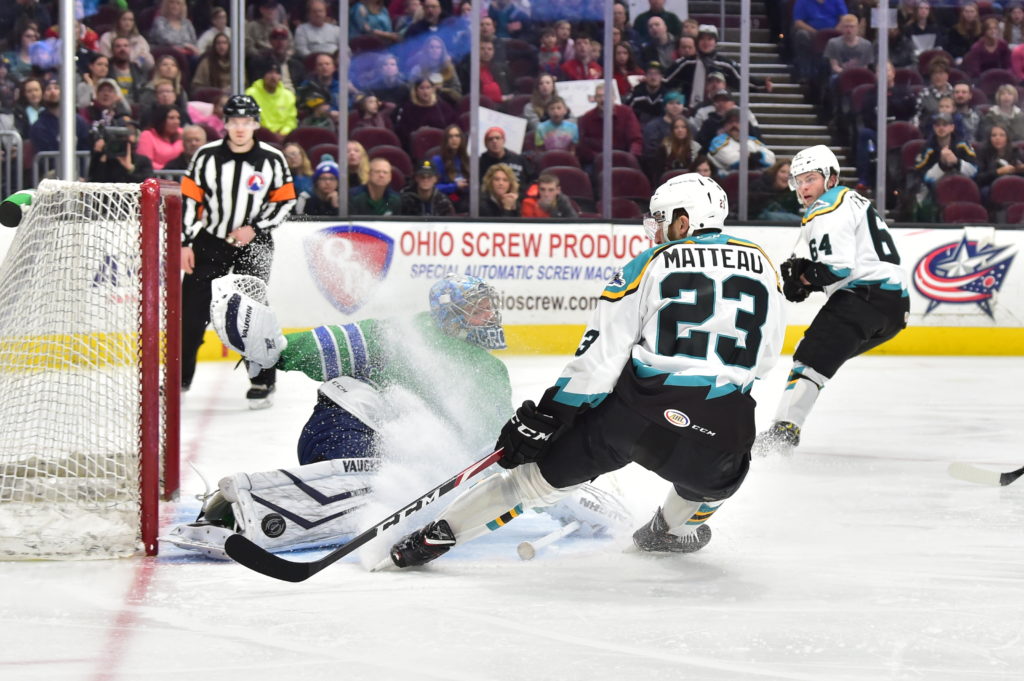 Even though they were trailing, the Monsters would not be denied. 3:42 into the final stanza of play, Stefan Matteau launched an absolute rocket of a one-timer from near the right faceoff dot, fed from Fix-Wolansky. This tied the game up at three.
This was not, of course, what the Admirals had wanted. They continued to battle, leading to some dust ups along the board. Finally, at 10:15, Rem Pitlick cleaned up the rebound off a Cole Schnieder shot, allowing the Admirals to regain the lead.
From there on, all momentum went to the Monsters. First, Dillon Simpson blasted a shot from below the blueline, past a screening Bittner and then past Grosenick. Then, the Monsters took the lead for good at 18:16 of the third. Clendening and his signature blueline bomber energized the crowd and gave the Monsters the 5-4 victory.
The Monsters return to action in Binghamton against the Devils at 7:05 PM EST. This kicks off a 14-day road trip for the team.

THREE STARS OF THE GAME