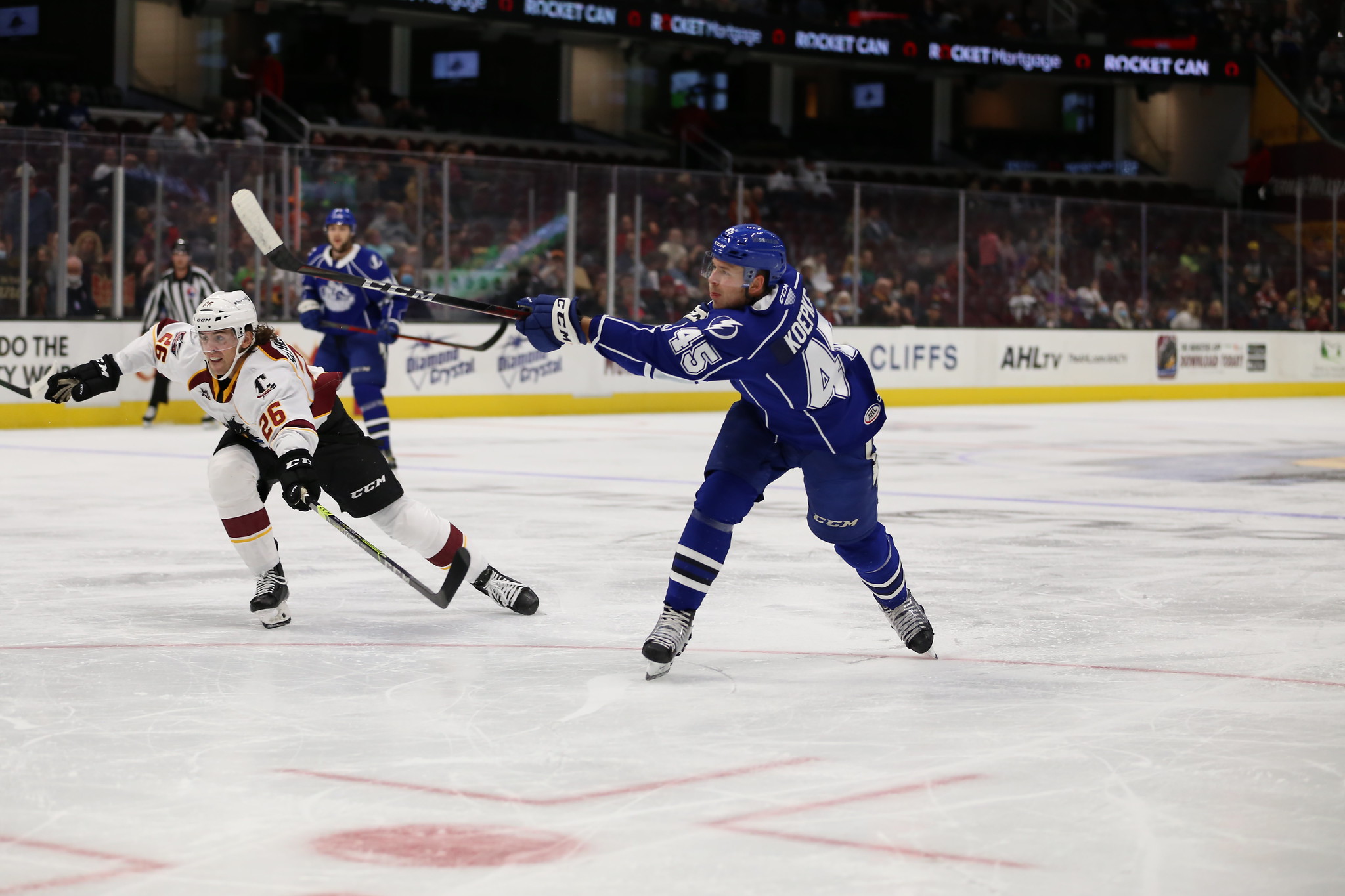 CLEVELAND – After blowing a 2-0 lead Friday night in a 6-4 defeat versus the Syracuse Crunch, the Cleveland Monsters had one thing on their mind: revenge.

Would they be able to bounce back after an early blow to their confidence? More importantly, if they got a lead could they hold on? Or would the fans, players, and coaches get deja-vu?

Cleveland scored on their first shot of the game. Granted, it didn’t come till 7:18 into the first period, but they made it count, and that’s what matters at the end of the day. Carson Meyer accepted a long pass from Gabriel Carlsson and skated into the Syracuse zone. He waited for a Crunch defenseman to commit before centering a pass to Justin Scott, who tipped it into the net.

First goal of the year for Cleveland. Carlsson flips the puck up to Tyler Angle who makes a beautiful pass to Justin Scott who falls as he puts it into the net.#SYRvsCLE
Clipped with @SporfieMoments pic.twitter.com/skj8FRDNhX

The second shot of the game for Cleveland happened at 10:11 and also resulted in a Cleveland goal. Scott passed the puck off the far wall in the offensive zone to Jake Christiansen on the blue line. Christiansen sent the puck towards the net, where it deflected off Meyer’s stick and in past Syracuse goaltender Hugo Alnefelt.

It was fun to watch while it lasted.

Who doesn’t like a little deja vu? We will tell you who—everyone in a Monsters jersey on Saturday.

It’s October meaning, which means one thing- it’s spooky season. There were no bigger ghosts in Cleveland this weekend than that of Jimmy Huntington. On Saturday night especially, he was a man on a mission with the single goal to just get the Crunch back in the game.

Jimmy gets it done ? pic.twitter.com/FyBNkzeDgO

Huntington was far from done, however. He got a power-play goal just 1:56 into the third period and, less than 60 seconds later, completed the hat trick scoring his third goal and tying the game.

That was the first hat trick in the AHL for the 2021-22 season. It was also the second time in his AHL career where he scored goals in back-to-back games.

First hat trick of the season goes to Jimmy Huntington of @SyracuseCrunch ??? Huntington now has 4 goals in 2 games. pic.twitter.com/Iy59G9txE3

The fans at the Fieldhouse were shocked. On back-to-back nights, the fans laid witness to their hometown team losing multiple-goal leads. Would the ghosts of games past come back to haunt the Monsters, or would they find a way to exorcise the Rocket Mortgage FieldHouse?

Late in the third and trailing by a goal (courtesy of Cole Koepke), the Monsters found themselves on the penalty kill after Tim Berni was called for tripping with under two minutes to play in the game. Unfortunately, this meant they would be down a man for the remainder of regulation.

It all depended on if they could find a way to tie it back up.

With goaltender Jean-Francois Berube pulled for the extra attacker, Cleveland set out to work. 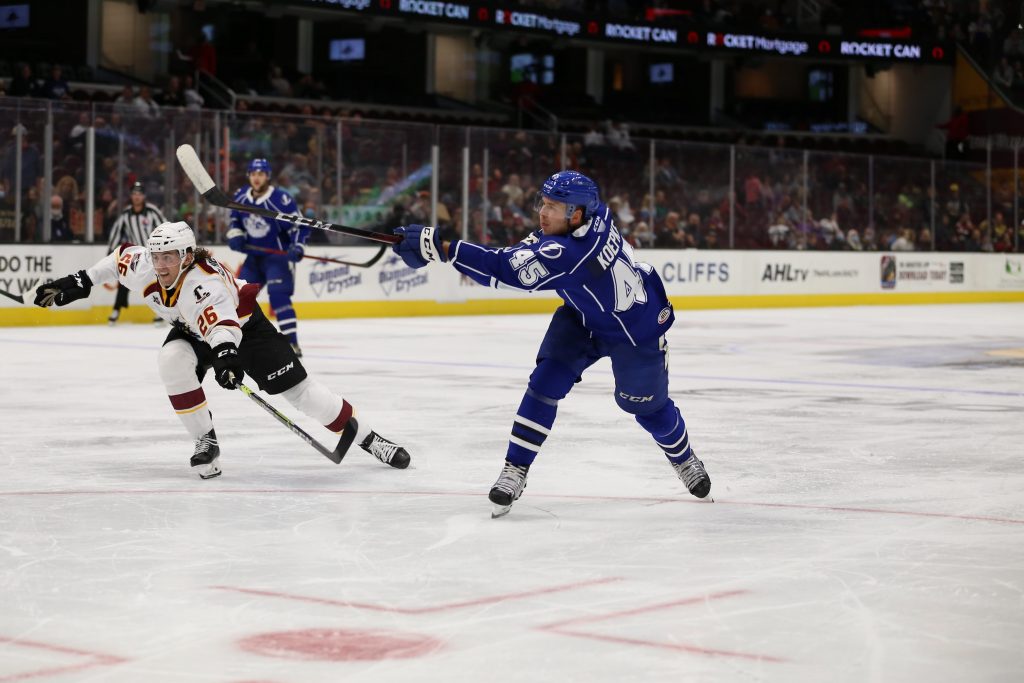 Scott put pressure on Alnefelt to get him to freeze the puck and get Cleveland an offensive zone face-off.  Monsters defenseman Gavin Bayreuther threw a puck to the top of the offensive zone, where Meyer was able to get his stick on the puck and throw it towards the net.

To the delight of the 6,598 fans in attendance, it went in. Unbelievably so.

After the game, Meyer recalled the play.

“I just kinda came up top to the point there, knowing when Gavin got the puck on the wall, he didn’t really have an outlet. So, I was just trying to be an option for him because I knew we had an empty net, and needed to get the puck on the net, and he (Gavin) just layed one out for me and I just figured I might as well shoot it. It was probably a little bit of luck it went in, because I didn’t even look at the net, I just ripped it. I’m obviously greatful it went in…”

We are going to end that quote right there. Don’t want to give away the ending if you don’t already know.

In overtime, the Crunch started with a four on three disadvantage.

Ultimately, Cleveland kept the pressure on Syracuse, limiting their possession in overtime. We will let Monsters forward Liam Foudy describe what happened next.

“There was just a little bit of a scramble in front of everyone there. Gav (Bayreuther) chipped it up to open space and I picked it up and realized the D backed off. So, I think it was Sikky (Tyler Sikura) coming with me on a two-on-one and I just put my head down and tried to shoot far side. Luckily enough, it squeaked through.”

The Monsters won against the Crunch, 5-4 in overtime.

The Monsters pulled off a win on Saturday night. But, a glaring issue over the weekend was having a 2-0 lead Friday night, followed by a 3-0 lead on Saturday, and watching both disintegrate.

After the game on Saturday, Monsters head coach Mike Eaves was asked about that.

“It’s a lot of things, and most of it stems from the fact we haven’t played a game in how many months? I think that is the biggest factor, there have been parts we’re fabulous in and parts that we’ve struggled in.”

Something Coach Eaves did take from Saturday night’s win was the character of the team.

“What I  think was nice to see tonight was the character of the team, rising to the top, by staying with it and doing the things we needed to get done and finding a way to solve the puzzle.”

So, it wasn’t entirely deja vu for the Monsters, and we think they will be happy with the lessons learned this weekend and escape with a .500 points percentage, which is what the league is using for the standings again this season.

Cleveland’s next in-game action comes up on Friday, Oct. 22, at 7:00 p.m. They are starting the first of a three-in-three weekend series in Belleville, Ontario for two games before moving to Toronto.