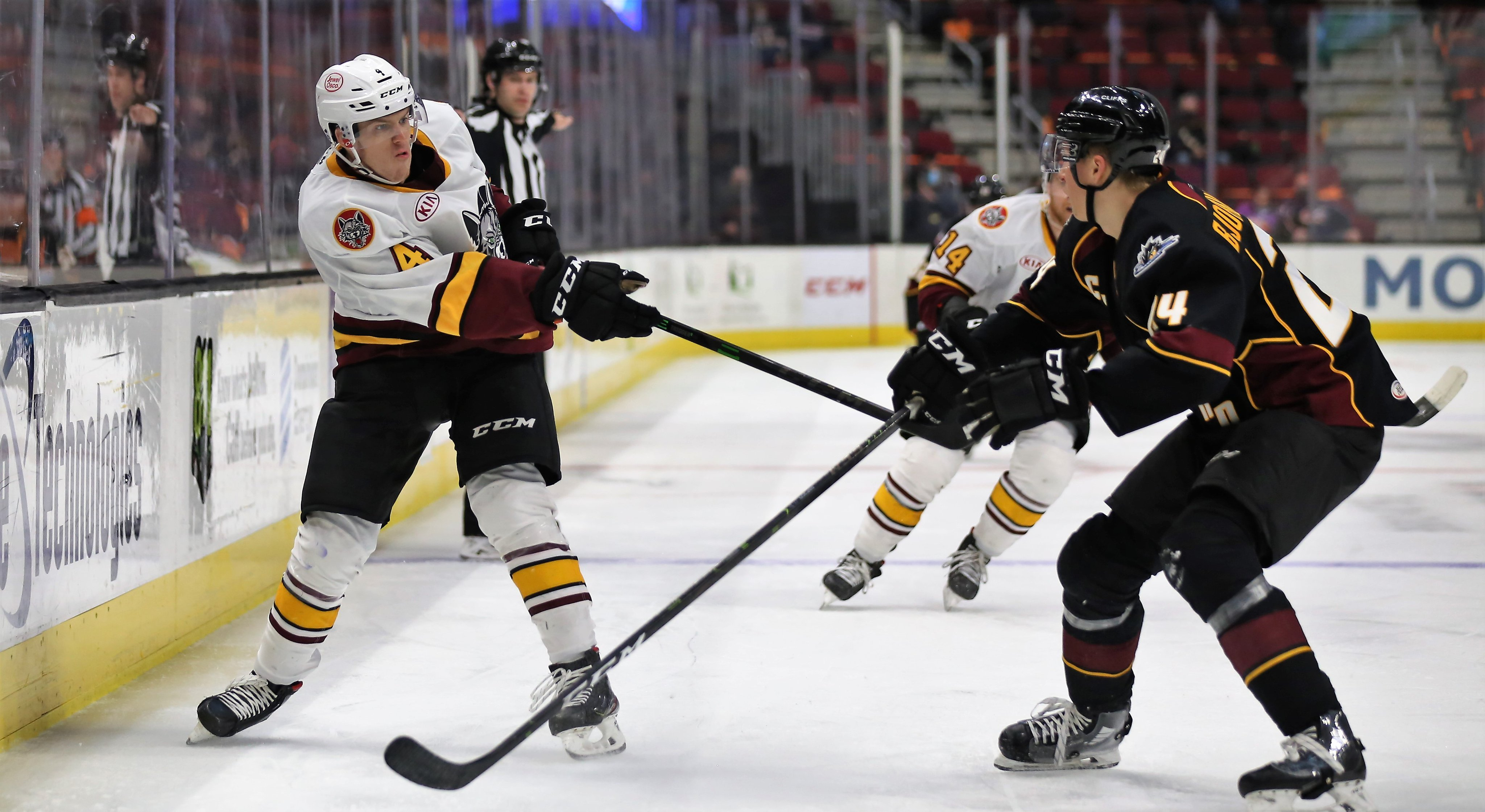 CLEVELAND – Sunday’s game marked the last meeting between the top two teams in the Central Division this 2021 season, with Cleveland winning the prior three matchups giving the Wolves their final chance to seek some revenge. In the second game of a back-to-back on the road, a quick start was paramount to Coach Ryan Warsofsky’s club. Of course, it’s one thing to have a game plan before puck drop and another to execute, and the Monsters weren’t so keen to allow the Wolves to create more separation in the standings. Just twenty hours after a wild overtime game, Chicago found themselves in another battle with Cleveland that saw high-end action from the opening puck drop until the final buzzer.

The Wolves got some reinforcements for Sunday’s game as Sheldon Rempal was inserted back into the lineup following a two-game suspension. With 9 points in 15 games and a key player on the penalty kill, he would be leaned upon once again to help the Wolves gain a needed two points over their division foe.

Connor Ingram (0-1-1, 3.36 GAA) got the start for the Wolves, while recent assignee Matiss Kivlenieks (5-1-0, 2.31) was given the nod for the Monsters. Kivlenieks was a familiar adversary for the Wolves, winning both of his starts against Chicago during the only other series that saw these teams play one another in early March, yielding only four goals in 125 minutes of gameplay. Unfortunately, it would be a familiar script for Chicago this Sunday.

From the opening puck drop, Chicago saw pressure from the Monsters’ attack that tested Ingram early. The Wolves would respond with a sequence of dump and chase hockey to gain possession in the attacking zone down low behind Kivlenieks. A full five minutes had passed with chances being traded by both teams, but it was Cleveland’s Tristan Mullin left alone in the slot to put the first marker of the game up on the board. This marked the ninth straight game that Chicago had given up the first goal.

Just thirty seconds later and it was renowned Cleveland tough guy Brett Gallant bursting in down the left wing side and firing a perfect shot past Ingram’s glove off the post and in. Before the Wolves could catch their breath, they were down in an early hole once more.

Chicago, however, maintained its game plan of working the space underneath and in the corners to gain possession in the offensive zone. Recent signee Zach Solow led the forecheck in just his third game since finishing his career at Northeastern and signing with the Admirals. Following his first professional goal on Saturday, Solow found more ice time and confidence from coach Warsofsky, and was noticeable along the boards and working in the corners to collect those pucks from Cleveland’s defensemen.

That tenacity ended up creating a powerplay opportunity, and on a pass from Solow that came from behind the net, it was Max Lajoie cashing in just as the man advantage expired to put the Wolves on the board late in the first.

Technically, this doesn't count as a PPG cuz it came one second after it expired.

But check out the nice puck movement from @tonyrick9 to Zach Solow to @max_lajoie to the back of the net!#CHIvsCLE#WeAreTheWolves pic.twitter.com/JxXsTXKPbK

The 2-1 score in favor of Cleveland would hold up into the first intermission.

Even though these two teams hadn’t seen each other since the first week of March, the talented, competitive clubs in a race for the division lead brought the physical play all night, and it was evident as the middle frame opened up. Joey Keane lined up Cleveland’s Carson Meyer for a big open-ice hit, and an exchange of words followed between the two as they made their way back to the benches. Meyer would later meet with Josh Healey in front of the net, giving one another cross-checks in one of many intense net-front battles to be played out all game. The Monsters’ Wyatt Newpower on the next shift would hammer David Cotton into the boards behind Kivlenieks, refusing to yield the easy possession in their defensive zone coverage.

With physicality comes chippy play, and a post-whistle scrum became a fight between Healey and Luke Moncada, which saw both players wrestling down to the ice. Healey is no stranger to this kind of game, and his sixth fighting major tied him for the AHL lead in that category.

In the second, the Wolves struggled to maintain momentum with a steady parade to the penalty box. Three straight penalties in the second half of the period kept them on the defensive against the AHL’s top powerplay that had already torched them twice on Saturday. Chicago’s penalty kill unit held strong this game behind Max Lajoie and Cavan Fitzgerald’s efforts to block a couple of blistering shots that saw both defensemen writhing in pain. Sheldon Rempal even had a shorthanded breakaway chance that was turned aside by Kivlenieks. However, the Monsters would carry the momentum as a blown assignment allowed Tyler Angle to streak into the high slot and fire a shot past Ingram for a 3-1 Monster’s lead that would hold into the second intermission. It was Chicago’s first scoreless second period of the season.

With twenty minutes to take away two points from a team chasing them down, the Wolves came out with an intent to challenge Kivlenieks and the Monsters’ defense, sticking to their strategy of setting up down low to try and open up the slot. Cleveland, however, kept to their stifling defensive play by clogging up the middle and not allowing easy entry to high danger scoring areas.

It took nearly 16 minutes for the Wolves to break through finally, and though it took a bounce for the opportunity to happen, Anthony Richard capitalized on a 3 on 1 rush to bring Chicago within striking distance.

In the blink of an eye, @fredallard3 and @tonyrick9 transformed this turnover into a goal late in the third period.

Chicago kept up the pressure on their forecheck, but again Cleveland allowed little to get through to the net, and when they did, Kivlenieks was sound positionally to make the stop with very few second chance opportunities opening up for any Wolves players crashing the net.

The final nail in the Wolves’ coffin in this series came with 1:40 to go as Tyler Angle chased down the puck on the right wing side and, with Ingram on the bench, swept it in to the empty net for the two goal lead. It was Angle’s second two-goal game in as many days against Chicago. The Wolves failed to register another high-quality chance, and the 4-2 score would hold up as the final for Sunday’s game, completing the Monsters’ season sweep of the Wolves.

Ingram would finish with 19 saves on 22 shots, while Kivlenieks turned away 28 on 30.

The Wolves turn right around to get on the bus and head to Grand Rapids for a makeup game against their rival Grand Rapids Griffins this evening. The Wolves get two days off, and then another stretch of three games in three days with another contest at Grand Rapids before finally coming home to host the Iowa Wild for a weekend series. Friday’s game will mark their first home game since April 3 against the Rockford IceHogs.

The compressed schedule will make for tired legs, but surely Coach Warsofsky will make sure that his team will be playing at the level they’ve come to expect from the club that remains at the top of the Central Division.