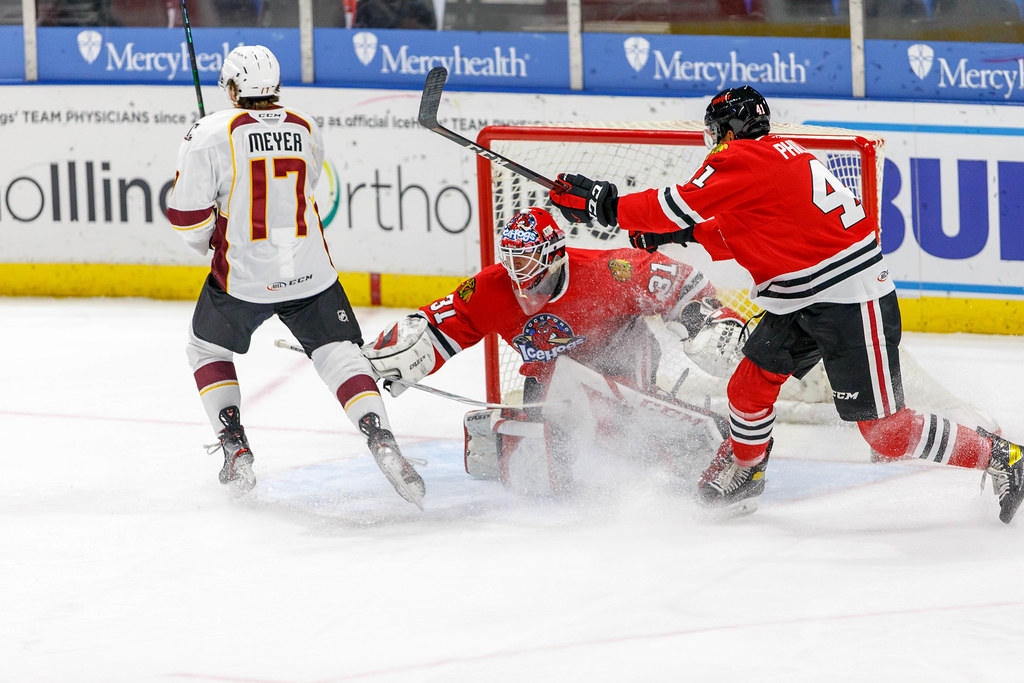 ROCKFORD, Ill. – One night after a blowout loss to the Cleveland Monsters, the Rockford IceHogs returned to the BMO Harris Bank Center in a different frame of mind.  A tenacious IceHogs defense, coupled with 35 saves by rookie Cale Morris, was the difference in a 3-2 triumph over the Monsters Tuesday night.

The Hogs picked up their first win of the season behind Morris, starting his first professional game. Rockford was able to rally from a goal down late in the contest to gain a measure of revenge for the previous night’s defeat.

“Hats off to the guys. They stuck to the game plan,” said IceHogs coach Derek King in his media session following the win. “For Cale, good job in net. I was happy for him.”

A more conservative approach by coach King’s club kept Cleveland from the opportunities from close quarters that sunk the Hogs the evening before. Despite being outshot 37-24, Rockford kept the game close all night until the offense could find the cord.

The two teams held each other in check in a scoreless first period. Cleveland gained a power play on a slash by Chris Wilkie six minutes into the second. The Monsters capitalized, taking a 1-0 lead on former Hogs forward Tyler Sikura‘s first goal of the season. Sikura was attempting a centering pass from the right post that banked off the leg of Hogs defenseman Cole Moberg and past Morris at the 6:26 mark.

The IceHogs answered late in the second, following an offensive zone faceoff win by Rockford captain Garrett Mitchell. Issak Phillips gathered in the puck and fired from the left point. Cleveland goalie Veini Vehvilainen made the pad save but left a rebound at the skates of Evan Barratt. Barratt slid the biscuit into the Monsters net at 15:52 of the second period to tie the game at a goal apiece.

Morris and the Rockford defense kept up the good fight despite being pinned in their own end for much of the final period. The levee broke at the 12:27 mark when Evan Polei got a stick on a rebound of Justin Scott‘s shot. The puck hopped over Morris and into the cage, giving Cleveland a 2-1 advantage.

Rockford clawed back to level ground with 3:23 remaining. Andrei Altybarmakyan won a battle for the puck in the corner of the offensive zone and fought his way to the right post. Vehvilainen snuffed out the initial shot. Altybarmakyan stayed in the crease, ending a scrum around the net by knocking the puck into the net for the equalizer.

The game-winner came off the stick of Phillips, who one-timed a pass from Barratt at the left point. Vehvilainen got a piece of the blast. However, the puck had enough juice left to reach pay dirt, with 1:33 remaining. Cleveland emptied its net, but the Hogs held firm to close out the win.

“We battled for three periods,” King said. “You’re always going to have some hiccups but those hiccups didn’t destroy us. We just kept fighting. I love the way we just battled and stayed the course and, you know, we got goals obviously when we needed them.”

In addition to multi-point nights by Barratt (goal, two assists) and Phillips (goal and a helper), Tim Soderlund recorded three assists for his first points of the season.

The Hogs get a few days off before another back-to-back with the Monsters, this time in Cleveland Saturday and Sunday.