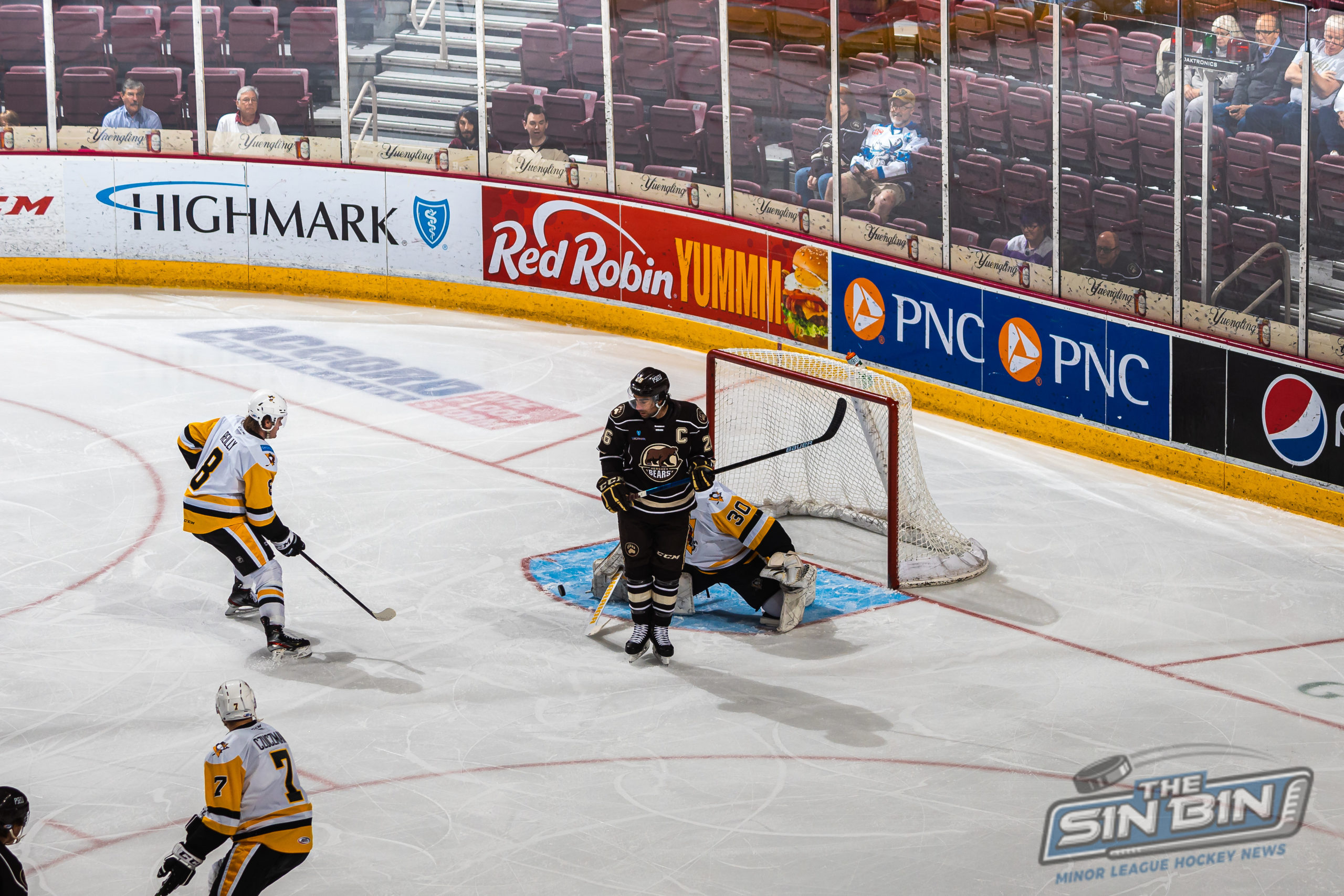 HERSHEY, Pa. –  The Hershey Bears went two seasons without one of their players wearing the captain’s emblem on their jerseys since the departure of highly respected forward Garrett Mitchell at the end of the 2017-18 season.

Mitchell held the position in Chocolatetown starting in 2015, and only a very elite group of players have held the honor in Hershey’s history leading up to the announcement of the 44th such player in the team’s 83rd season as none other than NHL veteran Matt Moulson, returning for his second season as a Bear this past season.

Hershey was able to enjoy Moulson’s veteran leadership for all 33 games this season, culminating in his 400th regular-season AHL game as the team’s season finale on May 16. In a season in which everyone in the organization had to expect the unexpected, Moulson’s steady play was a driving force for the Bears.

Finishing second only to rookie phenom Connor McMichael in terms of points, Moulson rarely went more than a game without his name appearing on the score sheet, chipping in 24 points (12 goals, 12 assists) in all of Hershey’s games this season, concluding the season with five points in Hershey’s last five games. Moulson found steady production amidst a season of different line combinations, frequently skating with his teammate Phil Maillet while he was in Hershey as well as paired with McMichael. A force on the power play, Moulson shared the team lead in power-play markers with McMichael with six, with the duo accounting for half of the team’s 24 power-play goals on the year.

Matt Moulson’s 12th of the season is a beauty! 2-0 Hershey! pic.twitter.com/t5DE5IeA0B

Having Moulson in the lineup and at practice each day not only benefits the Bears in points and wins, but is a massive boost in the development of young players who learn from his 1,000 plus games of experience. One such player aside from McMichael was Kody Clark, who skated on Moulson’s line a good bit of the season before injuries sidelined the second-year Bear, who matched his rookie season output in points with 11 fewer games played in total. Losing Clark was a blow to the Bears, as his increased role and offensive production helped offset the losses due to the NHL’s taxi squad rule, a theme that is a big part of this year’s off-season evaluations.

Hershey’s decision not to have a captain in the two years since Mitchell’s departure stemmed mostly from the variety of strong leaders to don a Bears jersey. Having a slew of players wearing the alternate captain’s emblem worked for a time, even in Moulson’s first season in Chocolatetown in 2019-20, but it became clear with this season’s group that Moulson was the natural choice to lead the team. Moulson, who played the past two seasons on a Hershey contract, was a consistent presence in the lineup that no doubt helped a lot of the young players on the Bears’ roster.

Speaking of injuries, the Bears went a large portion of the latter stages of this season down a number of skaters, even dressing several defensemen as forwards and going without a skater in the season finale. Moulson’s steady presence not only helped negate the losses up front, but the Bears seemed to embrace the challenge and overcome it. Spencer Carbery mentioned the “next man up” mentality that helped the Bears succeed, and when there’s strong players leading the way such as Moulson, it helps the entire group. In any challenge, whether it be the taxi squad, the mid-season recall of leading scorer Garrett Pilon, or the quantity of injuries affecting the forward line, it really didn’t phase the Bears as a group too much.

One of the only oddities is that, should the Bears sign Moulson, he will have to serve a one-game suspension for a clipping/spearing incident that got him tossed from the May 16 finale. Moulson delivered a hip check on Wilkes-Barre’s Billy Sweezy, who took exception and pinned Moulson to the ice, cross-checking him while prone on the ice. Upon throwing Moulson into the boards, Moulson’s stick came up and caught Sweezy up high. Somehow, Sweezy only received a two minute minor on that play while the league determined Moulson’s stick warranted additional discipline.

The biggest question on the minds of Bears fans as this season ends is if there will be another year of Moulson wearing the captain’s emblem on his jersey when the team takes to the ice in the fall. During the team’s season-ending media session this week, Moulson was asked that question directly.

“I absolutely love this organization,” Moulson said. “I said I came here to win a Calder (Cup) and I still haven’t had a chance for that, but hopefully we’ll have another one.”

While it’s not a guarantee, it seems like a win-win for all parties for Moulson to return for another season, as he was not only keeping such a steady point pace but for the leadership qualities he brings on and off the ice. If your captain is eager to win a Calder Cup, that’s a pretty solid reason for anyone associated with Hershey to bring him back as the team looks to get back to that place for the first time in over a decade.