NORFOLK, Va. – Weston DeWitt knew from an early age that he wanted to pursue a broadcasting career. He would often record himself doing his own play-by-play at Rapid City Rush games in his hometown of Rapid City, South Dakota. He would even do play-by-play as a young kid when playing video games with his brother, Roman.

“MY BROTHER AND I LOVED TO PLAY VIDEO GAMES. WHENEVER WE PLAYED TOGETHER, ESPECIALLY IF WE WERE PLAYING HOCKEY, BASEBALL, OR ATV OFF ROAD, I WOULD SIT BESIDE HIM AND ANNOUNCE WHAT WAS GOING ON. HE PROBABLY GOT SICK of it…PROBABLY STILL DOES TO THIS DAY IF I EVER ANNOUNCE AROUND HIM.” 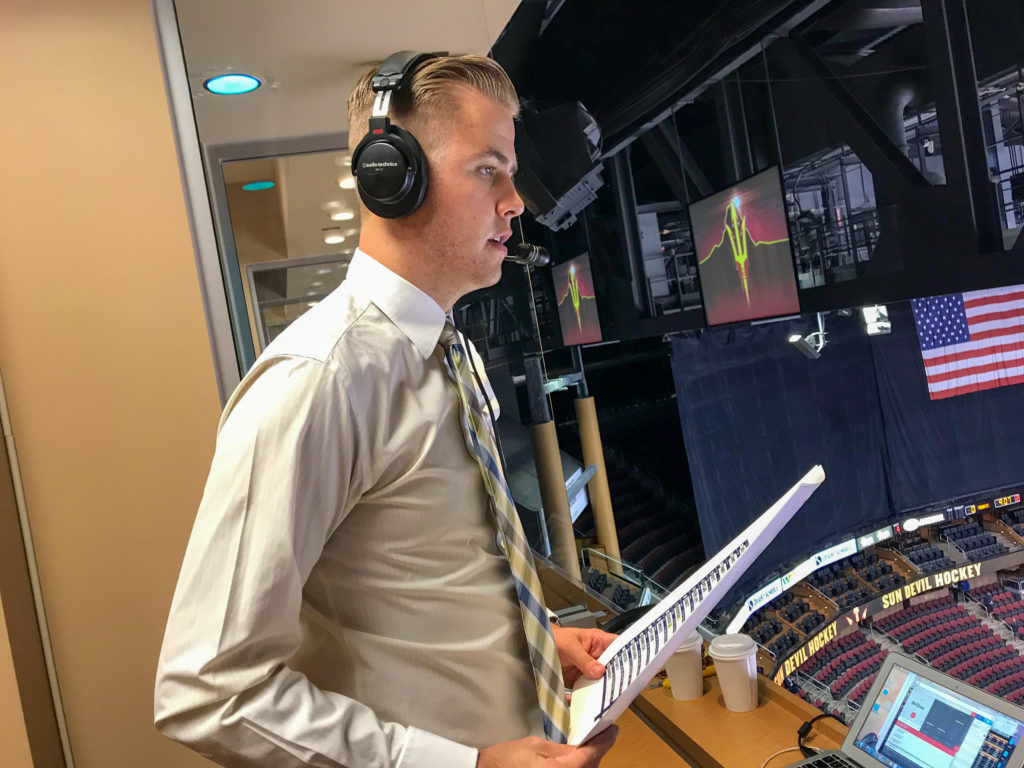 Prior to coming into his first job in professional hockey, the Arizona State graduate interned for a slew of big-name media outlets such as FOX Sports Arizona, MLB, and NHL Networks. He has called almost every sport you can think of, ran the student radio station at Arizona State, and covered numerous mixed martial arts fights for Fansided. There was one memorable call that helped land him the job in Norfolk, and that was his play-by-play of Arizona State versus Michigan at Yost Arena in Ann Arbor.

“I sent a five-minute unedited version of play-by-play from the eight-minute mark to the three-minute stretch of the second period to Norfolk and every other team. Norfolk said, ‘We heard your passion and we felt like we were there. You could clearly tell that you did your prep.’ That’s the one thing I take the most seriously as a play-by-play broadcaster is my prep. If you don’t prep, you’re stuck.”

DeWitt’s best friend from college, Eliav Gabay, overheard the Michigan call as well. Gabay, who now works at a local news station in Odessa, Texas, had this to say regarding DeWitt’s memorable commentary:

“The dude’s a pro; There’s no other way to put it. When you hear him broadcast, it’s like I’m listening to a professional hockey broadcast. He has the distinguished voice, the energy, and all the stuff that makes a hockey broadcast.
“He does it so well, and he analyzes the game if he needs to. That’s what we do when we’re training; we also do color (commentary). He knows it so well, he can break it down. As a whole, it’s the energy, the definition in his voice, and his explanation of a play. I get pumped when I hear his broadcasts.” 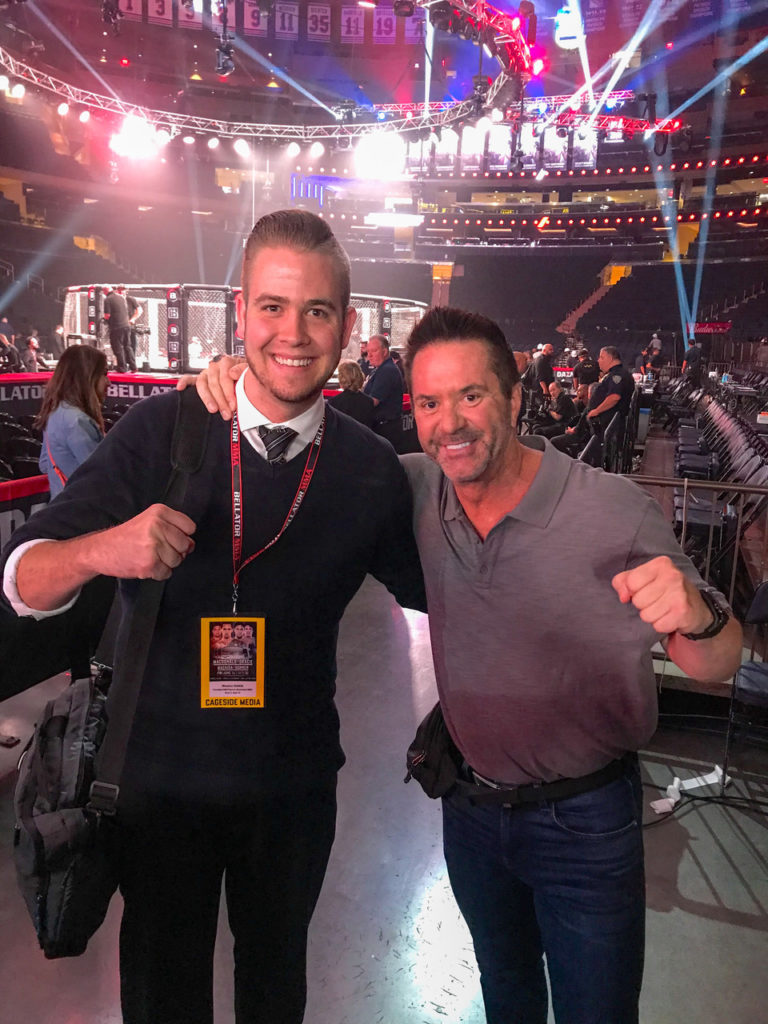 Dewitt has had some pretty well known mentors along his journey, but the two he credits the most are highly-regarded MMA announcer Mike Goldberg and Arizona Cardinals color analyst Ron Wolfley. DeWitt first met Goldberg at a UFC fight in Phoenix; he linked up with Wolfley during a radio internship.
DeWitt is grateful for the relationship he has with both Goldberg and Wolfley, who undoubtedly helped propel him into the job with Norfolk. DeWitt especially credits Goldberg with going above and beyond to help hone his play-by-play craft.

“That’s my guy. I love him to death. I’m very blessed, thankful, and lucky to call him a friend and a mentor. That’s a guy who is taking time out of his day to listen to my tapes and give me feedback and say nice things. He doesn’t have to be that nice, but he is and it blows my mind.”

During the interview process, Admirals Director of Operations Brad Jones was thoroughly impressed with DeWitt on a number of levels:

“First and foremost, his versatility. He can make us better in many ways. As a broadcaster, his energy, attention to detail, and preparedness stood out. His work In video with the NHL and MLB networks, along with his graphics work, social media presence with MMA, and his writing ability provides us with many avenues to bring content to our fans. His peers spoke volumes of his ability and potential. To me, he’s a tremendous up and coming talent”

“He’s excited to get started; his energy and work ethic are second-to-none. I’m excited for him to bring a weekly podcast to our fans, as well as an inside look at training camp day-to-day through social media.”

Coming into a new job means that DeWitt will have new duties. He shared what some of his duties during the summer months are, and what he will be handling during the upcoming season.

“During the offseason, my main priority is making the intro video for the team when they come on the ice. Once the season starts, I will be doing a podcast with Coach Taylor or myself talking about the team. Maybe having someone in the front office sharing their role. Maybe even  Patrick Cavanagh sometimes, getting an update from him.”

Additionally, DeWitt will be giving fans behind-the-curtain access, typing up game notes and stats for media members, and of course, broadcasting both home and away contests as the new play-by-play commentator.
With a new owner and coach at the helm this year, Norfolk is clearly rebuilding their brand in the Hampton Roads area. DeWitt is excited to be part of the rebuild.

“I’m incredibly honored to be part of an organization like this. I’ve learned so much about the history in my four weeks here. I do believe in what Patrick Cavanagh is doing. I’m not just saying that because he’s cutting the check. I believe in Rod Taylor; he’s a tremendous hockey mind. Ryan McGinnis is one of the most hockey savvy minds I’ve heard in four weeks. I’m ecstatic to see what this season holds, not only for its ownership, but for the fans and the players. from what I’ve heard, this town deserves it.” 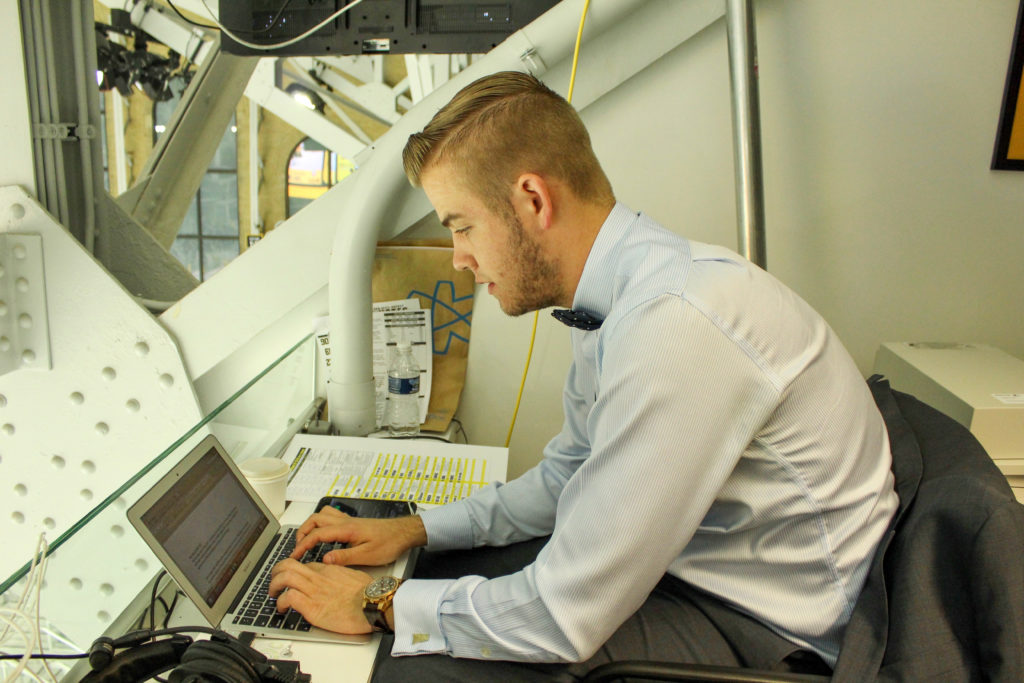 Although the team has yet to play a game, DeWitt tells fans they will see a very skilled squad when the Admirals open the season at home against the Florida Everblades on October 11.

“From what I’ve seen — and I know what the roster looks like — this will be a very skilled and a very fast team. It will be a very blue-collar type of team, and a team that will really get in those dirty areas, get in the corners, and dig those pucks free.”

The Norfolk Admirals have held a firm footprint at The Scope since the late 1980’s, and with that backdrop, the privilege to call games there is not lost on DeWitt.

“It’s a tremendous honor to be the voice of a team with so much fanfare and tradition like the Admirals. I’ve been blown away every single day I’ve been here. I’m blown away by the history of this team and the potential of what it can be under the ownership of Patrick and the stewardship of Rod.”

Follow Ted Warren on Twitter (@757HockeyDude) for all the latest updates regarding the Norfolk Admirals. Don’t forget to keep up with any last-minute offseason roster changes through our ECHL Transactions page, as well!