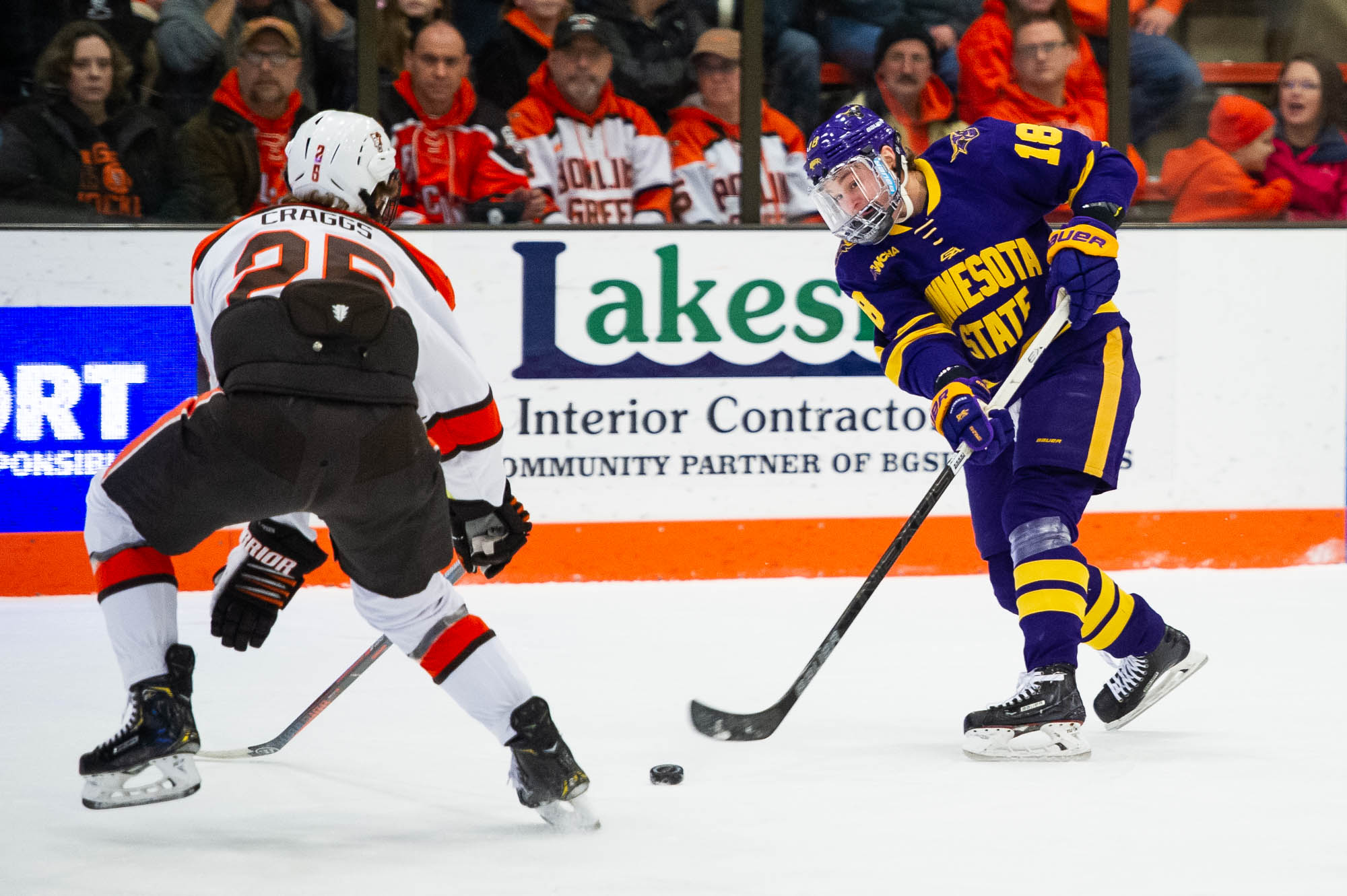 DENVER – On July 22, the Colorado Eagles announced the signings of defensemen Matt Abt and Ian Scheid to one-year, two-way AHL contracts. And while Abt has parts of three minor pro hockey seasons under his belt, Scheid is a rookie coming in from Minnesota State University – Mankato.

Curious about the latter, I took a peek at Scheid’s statistics. While at Minnesota State, he posted similar scoring figures in all four years of his collegiate career. Reaching out to his former university head coach Mike Hastings, there was no hesitation from the first question what Scheid’s stats and style of play pointed to.

“Consistent, from day one. We ended up getting Ian’s commitment late coming into his freshman year because Casey Nelson, a junior defenseman, decided to sign an NHL contract with Buffalo. So, we had an opening at that time, and it was like I said: late. And you know what? Ian came in, and all he was looking for was an opportunity,” Hastings said.

“To give you an idea of just how quickly he fit in: he went from a walk-on defenseman his freshman year to being a full scholarship defenseman his following year. He came in and was an all-league defenseman right from the get-go, and I thought he continued to perform at that level throughout his career. He battled through some injuries early, ended up getting those taken care of, and then from that point on continued to get better every year.”

It’s that kind of drive and determination the either the Eagles (or ECHL’s Utah Grizzlies) will be getting in the 5’11”, 170-pound. blueliner.

From July 8 to August 3, the last five Colorado signing announcements have been defensemen. With Scheid in the midst of those commitments, one has to wonder what sets him apart from the new and returning defensemen for the Eagles next season.

Hastings described the attributes and qualities Ian will be bringing into either Loveland (with the Eagles) or West Valley City (with the Grizzlies):

“I think in today’s world, the players that are ‘we’ guys instead of ‘me’ guys are hard to find. I just think he’s a guy that’s a really good teammate. He prepares himself both on and off the rink for success as far as his training, eating, habits, and not only being aware of what he does, but what’s going on around him and if he can help others. He’s more than willing to step up.

“The other end of it is, from the intangibles, his hockey sense and ability to process the game from the neck up is a strength for him. He’s always found a way to contribute offensively. Whether that’s through distribution or as he continued to get stronger and shoot pucks a little bit better with a little bit more velocity, he just really rounded out his game. He was a guy that impacted our power play from that time that he got here from the time that he left.”

Being on a two-way contract, Scheid will be vying for the chance to play at the AHL level instead of being granted the certainty of a one-way deal. Similarities can definitely be drawn from the circumstances he faced four years ago as an incoming freshman to Minnesota State.

“He was a guy that came into a situation where — the expectation level as he came in when he came in — ours was probably non-equitable to his. He wanted to come in and make an impact immediately; we were thinking we were going to get a freshman that was going to take some time to adapt and adjust. And, he continued to impress from the first time he hit the rink. Come November & December, he was a staple for our program and our team that entire season. Once he continued to raise the bar every month, our expectation and comfort with him as a player continued to grow,” Hastings said.

In conclusion, Coach Hastings further lined out the growth of Scheid and what he can bring to a hockey club on the ice, in the locker room, and beyond.

“I’ll tell you a little story. (Ian) established himself as the quarterback on our power play. I got after him a bit, and I don’t think I did a very good job explaining what I was upset about. This is the growth in his game…we walk by each other in the hall, and I kind of gave him a little dart and I said: ‘Hey, that’s got to be better.’ He looks at me and goes, ‘I don’t know what you’re talking about. Can you explain to me exactly what you’re looking for?’ And for me, that’s when he went from a young player to a confident player. He was fine saying to the coach, ‘Hey, you know what? You need to explain to me exactly what you want out of me.’

“He’s a guy that you want to see everyday at the rink. And I don’t care if it’s a coach, a trainer, strength coach, or a teammate. He’s a guy that you want to be around. We can sit here and talk for 20-25 minutes about what that means, but I think it’s a set of qualities that just as I’m continuing to coach, they’re harder and harder to find. The consistency and maturation of understanding how hard it is to be a good everyday player.

“Once he got healthy, you saw his game continue to adapt and get better. The point you brought up — and we all as coaches love — consistency. It’s hard to deal with when you have players that one day are at the top of your game and the next day, they’re somewhat less than that. With Ian, that just didn’t happen. He was a guy you could count on night in and night out for his 20+ minutes, first guy to get over the boards when there was a power play, and again, if you want to talk to anybody that’s got some qualities you want to be around, he’s a really good self-evaluator. When he was good, he knew he was good, and when he wasn’t, he wanted to find out why and adjust.”