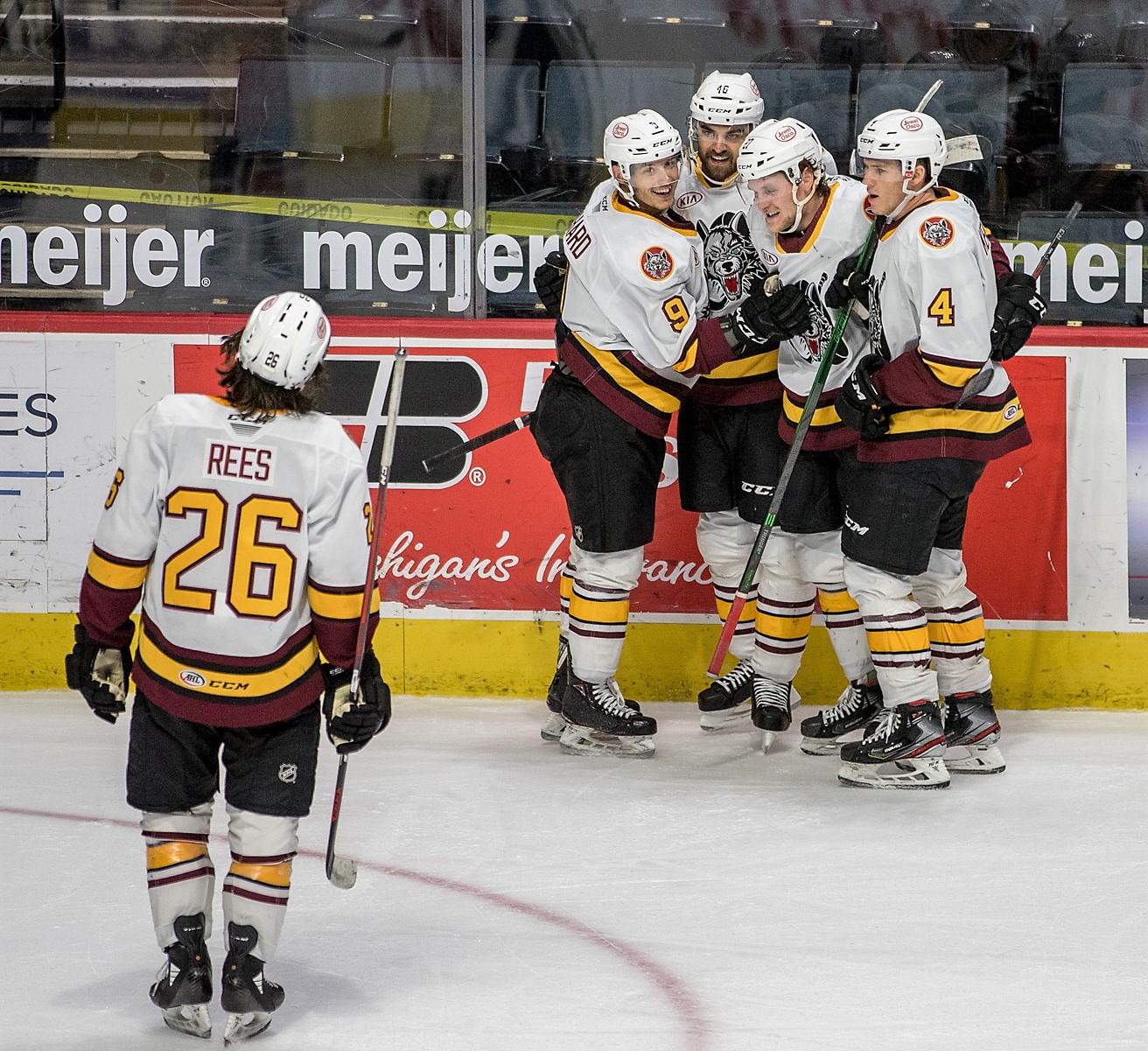 It was fast. It was fun. Virtual, yes, but the Wolves put on a show in their shortened season. It seems like it was years ago, already.

ROSEMONT, Ill. – The abbreviated 2021 season was, to put it mildly, unique for every team that participated. Few teams could boast in its strange but ultimately successful qualities quite like the Chicago Wolves. The season began with a dual affiliation with the Nashville Predators, subsequently absorbing another locker room full of players to be shuffled into the roster. Six goaltenders were utilized in the span of 33 games, which set a team record in less than half a regulation season. With junior restrictions put on hold at season’s beginning, Chicago’s major point producers and early faces of the season were teenagers, and by season’s end, one of those teens in Phil Tomasino would earn the distinction to lead the Wolves in scoring as they went on to win the Central Division.

All of the circumstances that led us here aside, the 2021 Chicago Wolves blitzed their way through the division with a high-powered offense that wore opponents down with their speed and puck possession. It wasn’t just unique – it was special. Coach Ryan Warsofsky took two separate locker rooms and turned them into one team. His team’s performance sparked talk around the league about a possible rule change down the line for underage players after the likes of Tomasino and Seth Jarvis lit up the score sheets. Only San Diego and Ontario scored more goals than Chicago with at least seven more games played in a high-paced Pacific Division that saw both teams give up at least 48 more goals.

It was fast. It was fun. Virtual, yes, but the Wolves put on a show in their shortened season.

It’s always incredibly tough to project these rosters with camps and prospect tournaments just kicking off, but we can at least track who is here and who is not. We’ll begin with the latter.

Milwaukee phoenix: No, that’s not a rebranding of the Admirals. With Milwaukee’s abstaining from the 2021 campaign, Chicago became the benefactor with some talented players inserted into a lineup already packed with skill. Starting with Chicago’s top two point scorers: Tomasino and Tommy Novak, who shared the lead in point scoring with 32 in 33 games, with the next closest on the list at 21 points.

With safe protocols in place to combat the ever frustrating pandemic, Milwaukee will be making a return and, as a result, the Wolves lose a pair of key point production from their 2021 lineup.

Another of Chicago’s strengths in 2021 – their speed through the neutral zone – takes a massive impact with Anthony Richard being returned to Milwaukee. Richard put up solid offensive numbers with 18 points in 28 games, but shined the brightest on the penalty kill, where his defensive prowess and speed made him a threat for a shorthanded goal against any man-advantage unit that failed to play with responsibility with the puck.

On defense, Josh Healey made himself a fan favorite with massive, open ice hits against unsuspecting opponents and dropping the gloves whenever challenged by an opponent. Healey led the AHL in fighting majors, and often by fight’s end, his opponent would regret the decision to challenge the big man out of Alberta. It remains to be seen how long he’ll remain a fan favorite of Chicago fans when he’s playing for a division rival and one of those Wolves is on the other end of a Healey freight train.

Now it's time to reveal who takes the Ubie for Best Hit of the 2021 season. Will it be @Tanner_Jeannot? @cole_smith16? Or Josh Healey?#WeAreTheWolves pic.twitter.com/O38oDYjPLu

Auf Wiedersehen: Another key loss both on and off the ice is David Warsofsky, the younger brother of the Wolves’ coach Ryan. Upon his acquisition from Toronto, David made an immediate impact, running the first powerplay unit from the point and providing a veteran presence to steady the blue line. In the locker room, coach Warsofsky explained David’s value in the locker room of being a vocal leader and setting an example of how a professional hockey player conducts themselves. This offseason, David signed with ERC Ingolstadt in Germany’s DEL, taking 476 games of AHL experience with him across the ocean.

Rolling Sixes: The situation in net was one of the major question marks to start the season for Chicago that ended with a resounding answer. Veteran goaltender Antoine Bibeau was penciled in as the starter after a shaky 2019-20 season that only saw four games played from him due to injury. His rebound from those injury issues and strong play in net in Chicago earned him a contract from the Seattle Kraken this offseason. Jeremy Helvig wasn’t tendered a contract, and Connor Ingram and Devin Cooley are Nashville products returning to their affiliated Wisconsin-based team. Beck Warm all but planted his flag in the starter’s crease with his play in 2021, but who can Chicago rely on to back him up?

Oh Captain, My Assistant Captain: With the loss of Tomasino and Novak, the Wolves need a source of offense in a major way to replace the hole in their lineup. Their request may have been granted in the biggest way – this offseason the Carolina Hurricanes signed Andrew Poturalski to a one-year, two-way deal. Poturalski knows how to bring the offense – his 43 points with San Diego paced the entire AHL in 2021. He put up seasons of 52, 49, and 70 points with the Charlotte Checkers, and was their MVP in 2019 leading the Checkers to the last awarded Calder Cup.

The assistant coach on those Checkers teams? Ryan Warsofsky. Familiarity with the organization’s staff and consistent top-level production? It seemed like a match made in heaven for the Wolves. Time will tell if Poturalski will be spending all season with Chicago or if he’ll get a chance to make a name for himself with Carolina after preseason camps, but should he make his way back to the Wolves, fans and foe alike should expect what Poturalski has given over his last six AHL seasons.

Keeping It in the Family: Over the offseason, the Hurricanes signed forward Jack Drury to an entry-level contract following an impressive rookie season for the Vaxjo Lakers in Sweden where he put up 30 points in 41 regular-season games and followed the nomination of being named SHL rookie of the year with 11 postseason points. Drury was a major factor in Vaxjo finishing with a first-place record and the Le Mat Trophy as playoff champion. That offensive production will be sorely needed with the departure of Tomasino and Novak.

Drury, son of former Hurricane Ted Drury, was a second round pick of the Hurricanes and will be making his professional North American debut. Considering the success of Wolves rookies with offensive talent last season, eyes will be on Drury to see his progression through the course of this 2021-22 campaign underneath coach Warsofsky not just as an offensive force but as a complete two-way player that was on full display in Vaxjo last year. That progression will be vital in seeing Drury continue to take steps to making the Hurricanes in the near future.

A Prime opportunity: The Wolves look to continue to bolster their offensive ability with the signing of Stephen Harper to a Standard Player Contract (SPC). Harper came onto the scene as a rookie for the ECHL’s Fort Wayne Komets last year and made an incredible impact from the get-go. Harper put together 31 points in 43 games in his first professional season, and followed it up with 13 in 12 playoff games on his way to leading Fort Wayne to a Kelly Cup championship and MVP honors along the way.

That’s now two former MVPs on the Wolves for this coming season, and while it shouldn’t be expected that ECHL production immediately translates into AHL production, the resume for success is there for coach Warsofsky to work into a productive player at this level of hockey.

Back the blue…line: Seeing Frederic Allard and Healey returning to Milwaukee and Warsofsky’s European exodus hurts Chicago, but help is on the way for the Wolves. Eric Gelinas inked a two-way deal with the Carolina Hurricanes, bringing with him ten seasons of professional experience both in North America and Europe. Gelinas also served as assistant captain for Rogle BK during his time in Sweden, and Chicago will be leaning on his leadership much in the same way they did with Warsofsky.

Daniel Brickley and Artyom Serikov were also signed to SPCs by the Wolves to add depth to their blueline. Brickley, 26, spent parts of the last four seasons in the Los Angeles system with Ontario before being signed by Chicago. Serikov, 20, will be making his North American debut with Chicago after appearing in 41 games for Moscow Spartak in his native Russia last season.

Perhaps most foreboding for the Wolves is that with Carolina signing names like Brendan Smith, Ian Cole, and Tony Deangelo to shore up their defensive depth, the likely scenario is that #1 defenseman Max Lajoie will return to Chicago with the Hurricanes signing him to a one-year, two-way deal. Max’s importance in Chicago’s rise to the top of the Central Division standings could not be understated in 2021, where he anchored the top spot on the blue line with huge minutes logged on all special teams. Despite seeing two games of playoff action, and performing admirably in those, Carolina’s veteran free agent signing more than likely bumps Max down the depth chart and into Chicago barring a huge training camp on his part.

Nothing but net: Perhaps the easiest scenario to predict for the Wolves is their situation with the men wearing the big pads. Beck Warm exploded onto the scene last year, starting as the third goalie on a show-me contract from the Wolves, and his play not only solidified him as the starter but earned him a contract with Carolina. With the losses behind Warm, the Hurricanes solidified the crease with a two-way deal for Alex Lyon, as well as trading for Dylan Wells from Edmonton. While Wells wasn’t tendered an offer by the Hurricanes, the Wolves signed him to an SPC.

Lyon, 28, spent the last five years between Lehigh Valley and Philadelphia, though has only seen 13 games of action in the last two seasons. Nevertheless, he brings a proven record in the AHL and a steady veteran presence behind Warm. Wells, 23, spent the 2021 season almost exclusively on Edmonton’s taxi squad, and has seen most game action for the Wichita Thunder in the ECHL.

We can continue to go on and on about who was brought in where, and nothing will be set in stone until the opening puck drop on October 16 against the Rockford IceHogs, but with just under a month of time to kill, here is your way-too-early projected lineup for the 2021-2022 Chicago Wolves