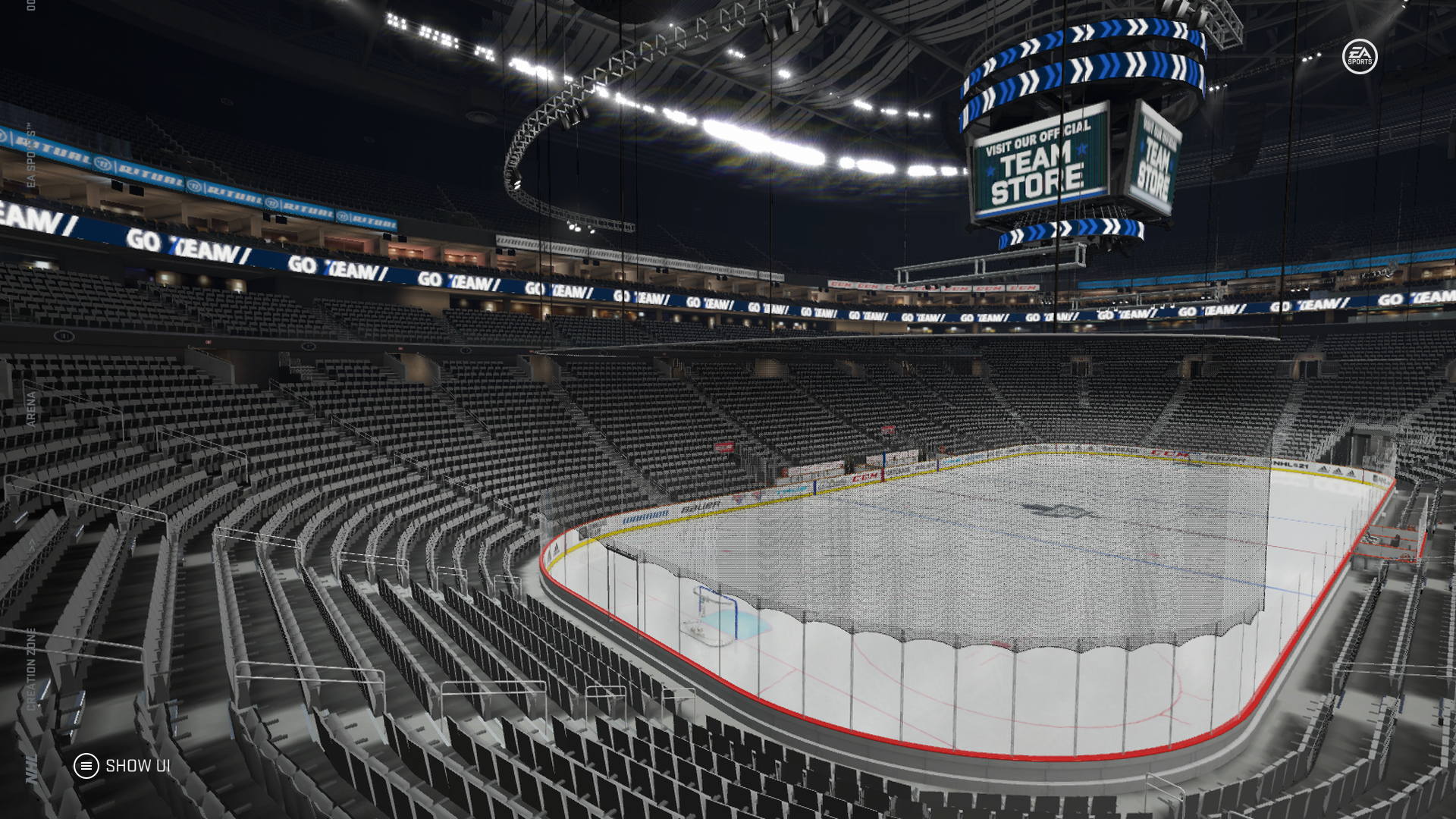 NHL 21 Sim Series: Marlies in the NHL Part One

NHL 21 Sim Series: Marlies in the NHL Part One

TORONTO – I’ve always wondered how the Marlies would stack up in the NHL. I mean, hey, they’re only 10 minutes down the road from an NHL arena. Well, through the power of video games, we simulated that. For this, we actually put the Toronto Marlies in the virtual NHL to see how it would go. I did a complete simulation with only small changes regarding the roster.

We turned things to season mode of NHL 21 and subbed out the lowest overall NHL team, which just so happens to be the Ottawa Senators in the Atlantic Division (82 overall).

Our roster came in at 70 overall, 13 points behind the second-lowest Los Angeles Kings at 83. Aaron Dell was a big help to the overall rating. Although he wasn’t necessarily on the team in NHL 21, I thought it would be fun to have him. 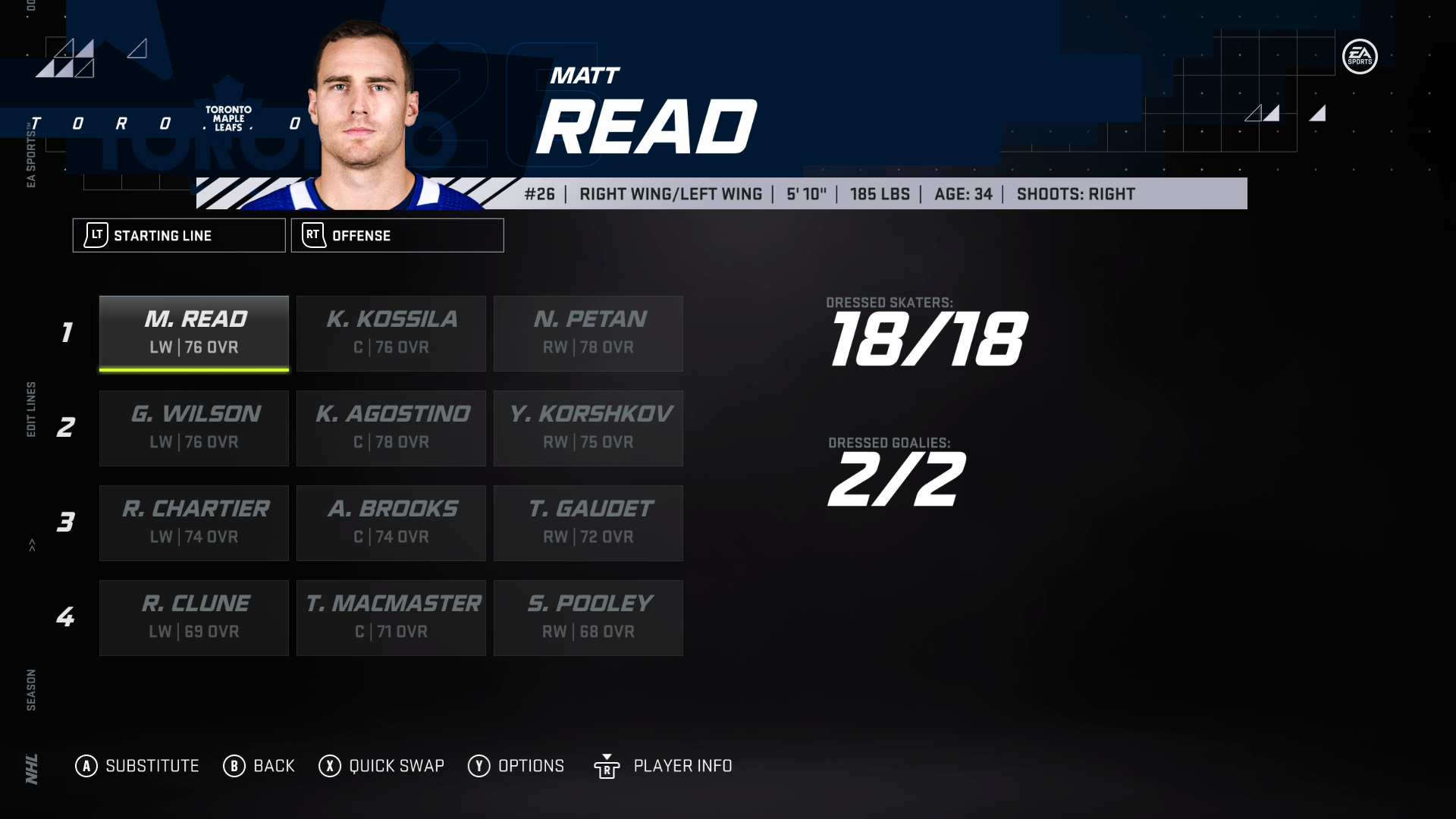 Unfortunately, due to limited options when making a team, we had to use the retro Toronto Maple Leafs logo 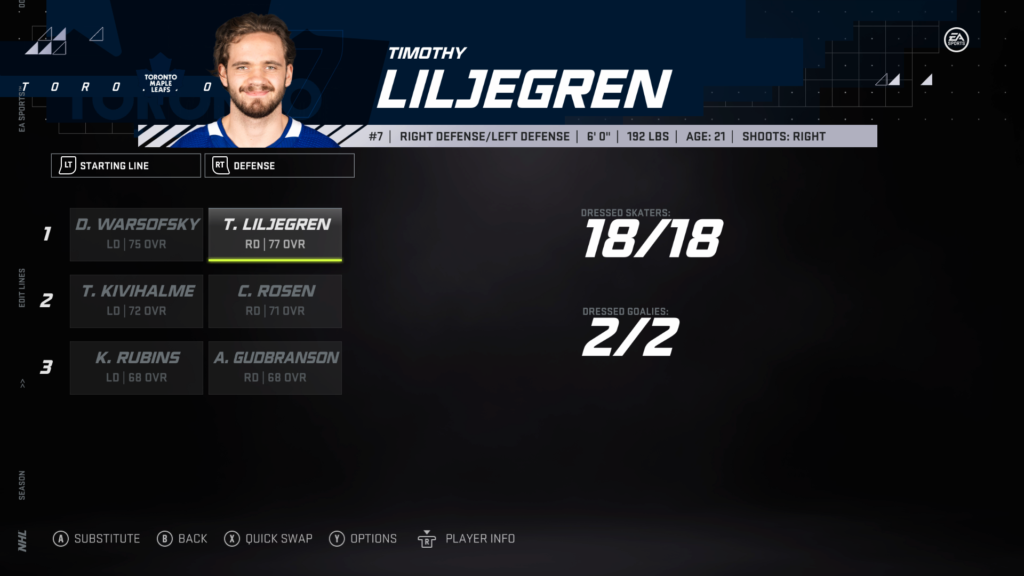 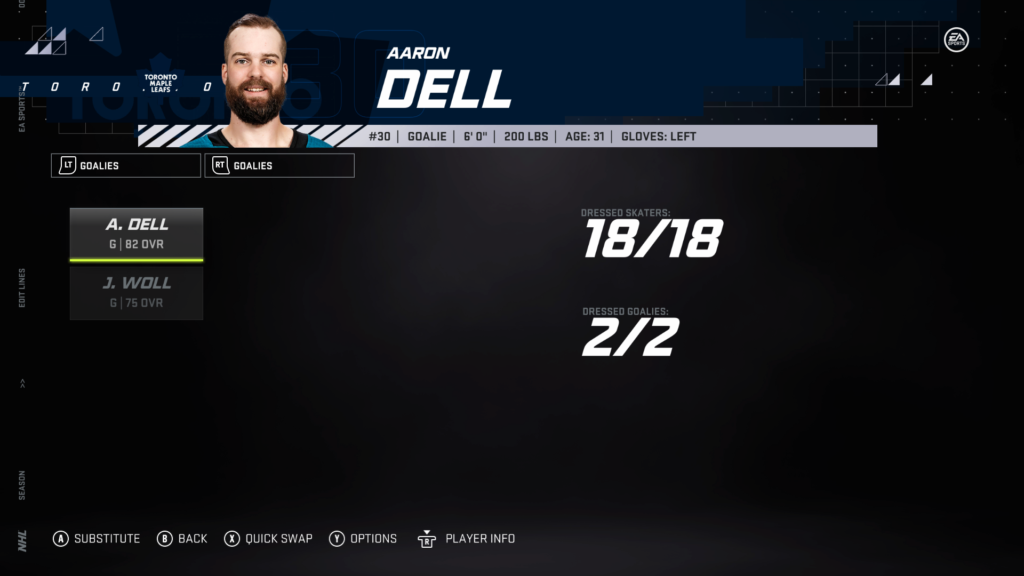 Computer trades are on, All-Star difficulty is on (not that I’m playing, but apparently that matters), and injuries are on.

Everything else, we kept as standard NHL rules.

Not going to lie; I didn’t think the Marlies had a prayer starting off. Maybe a 5-0 loss on home ice to start off the season didn’t help. By the end of the first week, we had lost every game. A complete 0-4 record, losing to Chicago, Toronto, Boston, and Philadelphia. To make matters worse, in the first four games, the Marlies didn’t register a single goal.

On Halloween, the Marlies had a grim 2-9-0 record. Garrett Wilson was the leading scorer through those 11 games, with two goals and three assists. As for Dell, who I thought would be our little piece of candy, flopped to the floor. His 1-8-0 record didn’t look so shiny, and a 3.82 GAA/0.893 SVS% didn’t help either.

Near mid-November, panic ensued. The virtual Marlies got the injury bug. Dell, Yegor Korshkov, Kristians Rubins, Timothy Liljegren, Kenny Agostino, and Kalle Kossila all broke down with some sort of injury. I gulped in fear when I replaced the empty goaltending position with Angus Redmond, who had a mere 65 overall rating.

Although our stats were poor, the Marlies contained some good all-around qualities. David Warsofsky led the team in points (three goals, seven assists) with an average of 0.55 points per game, almost on par with what he had in the AHL last year with the Wilkes-Barre/Scranton Penguins. Joseph Woll had an outstanding 3-2-0 record with a 0.948 SVS% and a 1.92 GAA. Additionally, Liljegren was rocking a minus-one rating, which is better than what he had on both the Marlies (minus-four) and Maple Leafs (minus-five) during the 2019-20 season.

At the end of our second month, well…in the face of optimism, the Marlies were just one point out of last place. Additionally, we already had won as many games as the 1974-75 Washington Capitals (eight wins).

Nic Petan led the squad with 13 points through his 26 games and had a poor minus-seven rating through October and November. 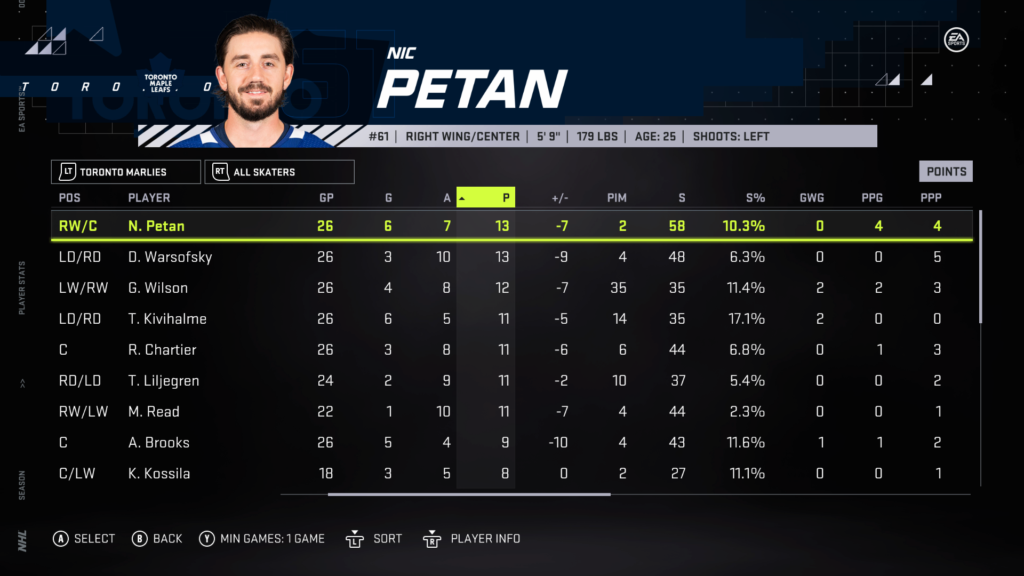 In the next piece, we’ll take you through December and January, including two dates with the Montreal Canadiens and Washington Capitals, respectively. Also, Matt Read, Kossila, Rubins and our somewhat sour eye-candy — Dell — will be back on the virtual ice.