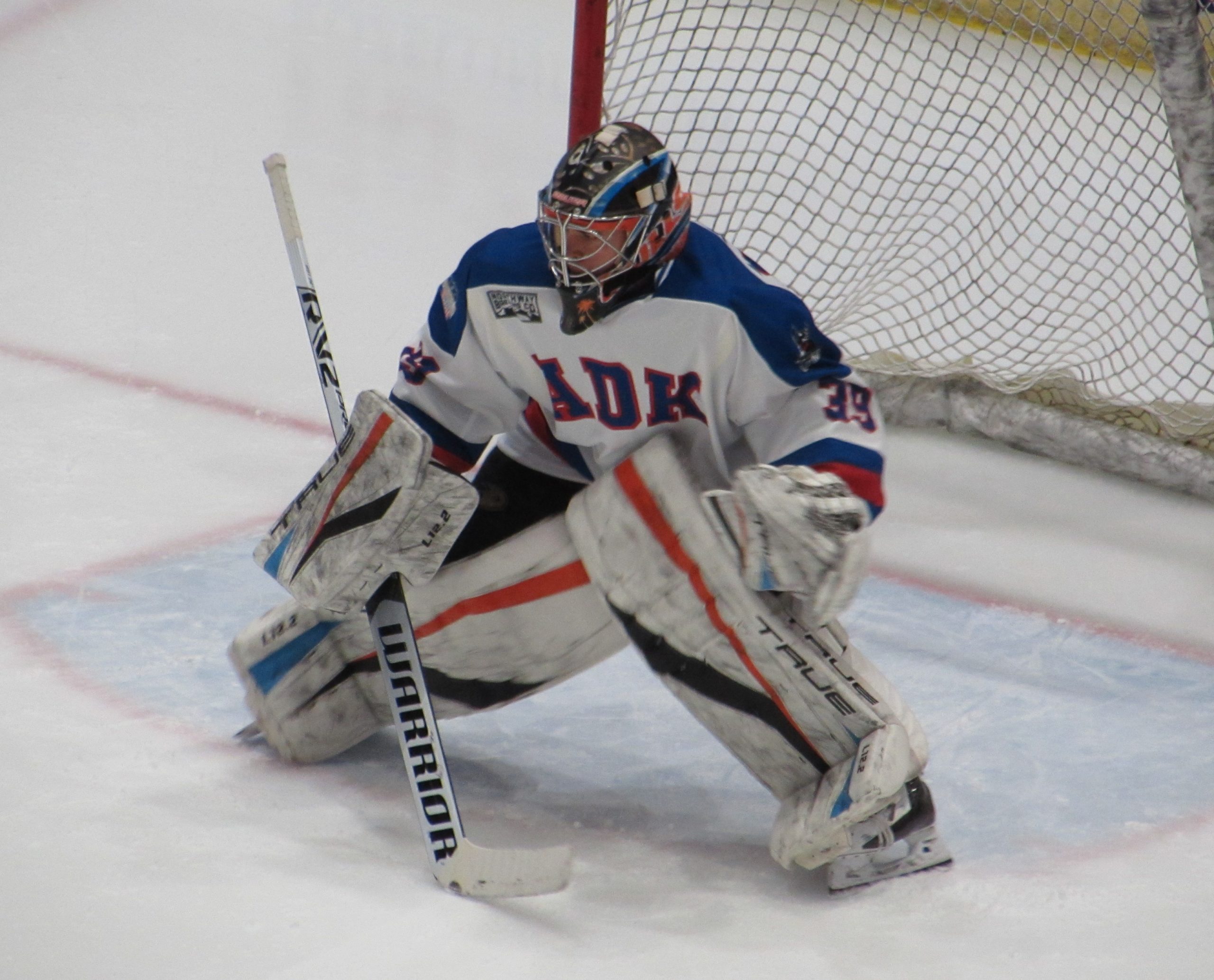 No Miracle for Thunder in Loss to Mariners

No Miracle for Thunder in Loss to Mariners

GLENS FALLS, NY – With fans chanting “USA” as 1980 Miracle Team goaltender Steve Janaszak dropped the ceremonial first puck in Glens Falls Saturday, the night seemed destined to be an exciting one.  The Adirondack Thunder were wearing specialty jerseys that closely resembled those of the 1980 Olympic ice hockey team, and clips from the 1980 Olympics and from the movie Miracle played on the video boards throughout the game, including Head Coach Herb Brooks‘s famous motivational speech before their game against the USSR.

But after the first few minutes of Saturday’s rematch between the Thunder and Maine Mariners, the excitement seemed to fade.  Despite a total of seven goals being scored, it was certainly no match for Friday night’s penalty-marred contest between the two teams, in which 108 penalty minutes were assessed.  And despite a late third period comeback attempt, there were no miracles for the Thunder Saturday night as they fell to the Mariners 4-3.

Noah Corson got Adirondack on the board 5:32 into the game as he knocked Ryan DaSilva‘s pass past Maine goaltender François Brassard from the doorstep.

Go to the front of the net and good things happen. pic.twitter.com/pGFVWcudAq

The Mariners tied it up less than five minutes later.  Tim Doherty, Alex-Olivier Voyer, and Nick Master skated into the offensive zone on a three-on-two, passing back and forth until Doherty threw it toward the net for Voyer to deflect past Thunder netminder Francis Marotte.

The Mariners took their first lead of the night six minutes later when Andrew Peski threw the puck in front of the net for Curtis Hall to blast home.

Watch closely, or you will miss this shot and goal from Curtis Hall! #CatchTheCurrent pic.twitter.com/wK9977ixon

Neither team scored again until the latter half of the third period, when four goals were scored within a span of 5:25.

Hall extended Maine’s lead to 3-1 when he redirected Fedor Gordeev‘s shot past Marotte.

Curtis Hall is having himself a game! Take a look at his 2nd goal! #CatchTheCurrent pic.twitter.com/h1erDAlYty

Less than four minutes later, Thunder defenseman Jeff Taylor brought his team to within one after his shot from the blue line beat Brassard.

Taylor: “It was great to be back, shake the rust off a little bit.  It’s been awhile, so it’s always nice to get that first one, especially on home ice.”

Garrett VanWyhe scored his first professional goal for Adirondack with 30 seconds remaining, but there wasn’t enough time for the Thunder to tie it up, and they closed out the night with the 4-3 loss.

Three skaters had a multi-point night (each with two points): Adirondack’s Corson had a goal and assist; Maine’s Hall had two goals while Peski had two assists.

“He played awesome.  He brings an urgency that we don’t seem to have all the time.”

Two players received suspensions as a result of their actions in Friday’s contest.  Maine’s Mathew Santos received a one-game suspension following a knee-to-knee hit on Adirondack’s Nick Rivera during the second period.  Adirondack’s Sebastian Vidmar received three games for an abuse-of-officials call during the third period.  Both were serving their suspensions Saturday.  Santos is set to return to action Sunday, while Vidmar can return next Saturday.

The Thunder (4-8-3-1) and Mariners (8-9-1-0) close out their 3-in-3 Sunday afternoon in Portland, Maine.  Adirondack then travels to Virginia to take on the Norfolk Admirals (2-17-1-0) in another three-game series Wednesday, Saturday, and Sunday.