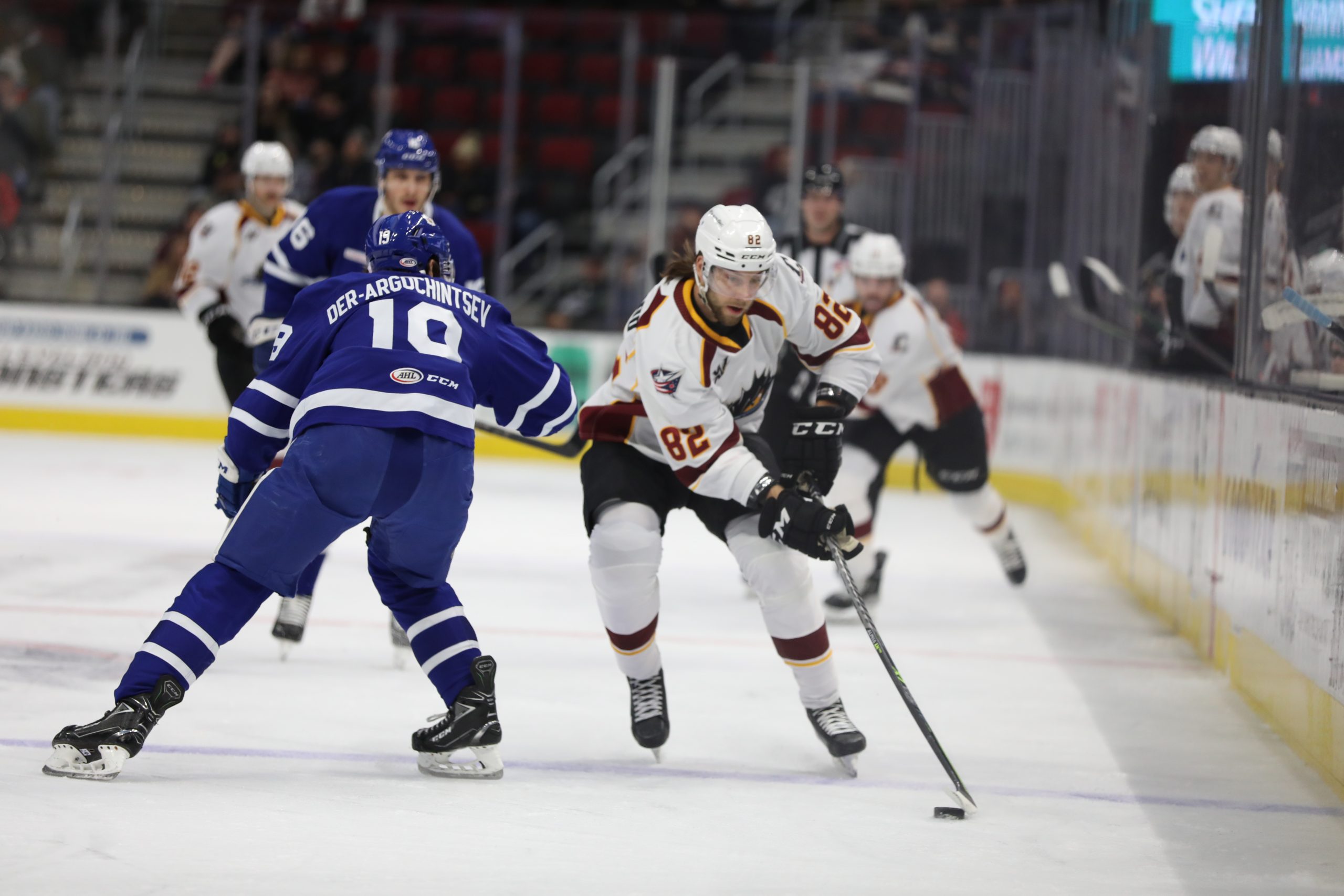 No Thanksgiving Hangover for Monsters, Knock Off Marlies

It was a perfect post Thanksgiving game for the Cleveland Monsters as they let the 8,026 fans fuel them past the Toronto Marlies.

No Thanksgiving Hangover for Monsters, Knock Off Marlies

Cleveland – It was a perfect post Thanksgiving game for the Cleveland Monsters as they let the 8,026 fans fuel them past the Toronto Marlies. It was a perfect hockey game so to speak with plenty of hits, goals, and action.

There was no Thanksgiving hangover Friday night for neither the Toronto Marlies or the Cleveland Monsters. The two teams came out of the gate absolutely flying, trading chances on each end of the ice. The starting goalies Daniil Tarasov and Michael Hutchinson each faced three shots before the game was even five minutes old.

Cleveland got on the board first 16:25 into the first period thanks to Brett Gallant. Jake Christiansen dumped the puck into the corner where Kevin Stenlund caught up to it, he fired the puck towards the net where it deflected off of Gallant and into the net stick side on Hutchinson.

Brett Gallants gets his second goal of the year. Kevin Stenlund throws the puck in front of the net from the Corner, it goes off Gallant and in! Cleveland with the early lead. Video from AHLTV #TORvsCLE pic.twitter.com/7kLuYA0cxD

Stenlund once again had his eyes wide open while he had the puck and found Tyler Sikura in front of the net, who snuck it past Hutchinson stick side. The goal came within the final minute of period one.

Kevin Stenlund feeds Sikura in front of the net, 2-0 Cleveland. Less than one to go in first. Thanks to AHLTV for the video. pic.twitter.com/ClbKPXx3vj

Stenlund was really playing well for Cleveland in the first. He was skating with keen awareness and making plenty of smart plays and passes. Someone who kept the Monsters in the mix was Tarasov, who made a pair of incredible saves in the first. Since getting some consistent starts in net, Tarasov has looked like a different player, seeming to be more confident and his keeping rebounds in at a much better pace.

I am not exactly sure why Billy Sweezey thought giving an extra shove to Curtis Douglas who stands 6-foot-8 was a good idea, but he did, and boy. did he regret it. The two got into a brief scrap which saw Douglas got the takedown and Sweezey cut open. Billy went down the tunnel for repairs and never returned.

Fight video curtsey of AHLTV, an interesting decision by Sweezey for sure. #TORvsCLE pic.twitter.com/AtoimqyxZP

Shortly after the fight Carson Meyer and Mikhail Abramov were sent off for cross-checking minors, which meant four a side hockey for two minutes. Just 12 seconds into it, Cole Clayton took an interference penalty. which cut the Marlies’ advantage in half. They were able to get a powerplay goal 10:05 into the second when Alex Steeves lasered a slap shot on the net. Tarasov made the initial save, but let the rebound loose in the crease, where after several pokes Joey Anderson was able to poke it home.

First goal for Toronto. AHLTV with the Clip #TORvsCLE pic.twitter.com/E7Sxqthfq9

With 6:24 remaining in the second, it looked like the Monsters’ lead was back to two. Angle was in the far corner and fed Brendan Gaunce out in front, who it appeared tipped it past Hutchinson. There was a delayed reaction on both sides as no one knew for certain if the puck went in. After a lengthy review, the officials ruled no goal due to the puck not crossing the goal line.

Cleveland would get the third period off to a great start thanks to a shorthanded goal just 2:44 into the period. Liam Foudy and Angle had a two on one. Foudy was on the right side and drove the net opting to keep the puck, he deeked out Hutchinson, putting the puck in the net, to give the Monsters a 3-1 lead.

Video from AHLTV, Foudy with the speed, his fifth of the year. pic.twitter.com/XCYtbTkKwP

The shorthanded goal was a long time coming. Cleveland had the puck more than Toronto did during their powerplays Friday night. Angle and Foudy had several chances through out the night while being shorthanded and it was just a matter of time before one of them lit the lamp.

Jake Christiansen continued his hot streaking scoring Clevelands’ fourth goal at 6:44 of the third.  Stenlund passed the puck up to the blue line where Dillon Simpson was he passed across the blue line to Christiansen, who fired the shot which got a piece of Hutchinson but but not enough of him as it tricked into the net. This was Simpson’s first point of the year.

Thanks to Ahltv for the clip pic.twitter.com/WN3PLF9IU1

To complete the hat trick of goals in the third, Trey Fix- Wolansky scored on the powerplay at 9:19 of the third. Gaunce from the right faceoff circle fed Wolansky who was above the left faceoff circle he shot the puck and scored thanks to heavy screening in front of Hutchinson.

Wolansky on the power play gives Cleveland a four goal lead. Thanks to AHLTV for the video. #TORvsCLE pic.twitter.com/WTm68I5XZ1

Wolansky’s presence is what the Monsters seemed to need. Since returning to the lineup, he’s registered four points (3G, 1A) and the Monsters are 4-0. One thing that is apparent is Wolansky is not holding back. Some players don’t return to themselves right off injury as there afraid of getting reinjured. That, however, is not the case with Wolanksy.

Cleveland and Toronto will play again this afternoon in Toronto. Faceoff from the Coca-Cola Coliseum is set for 4 pm ET.