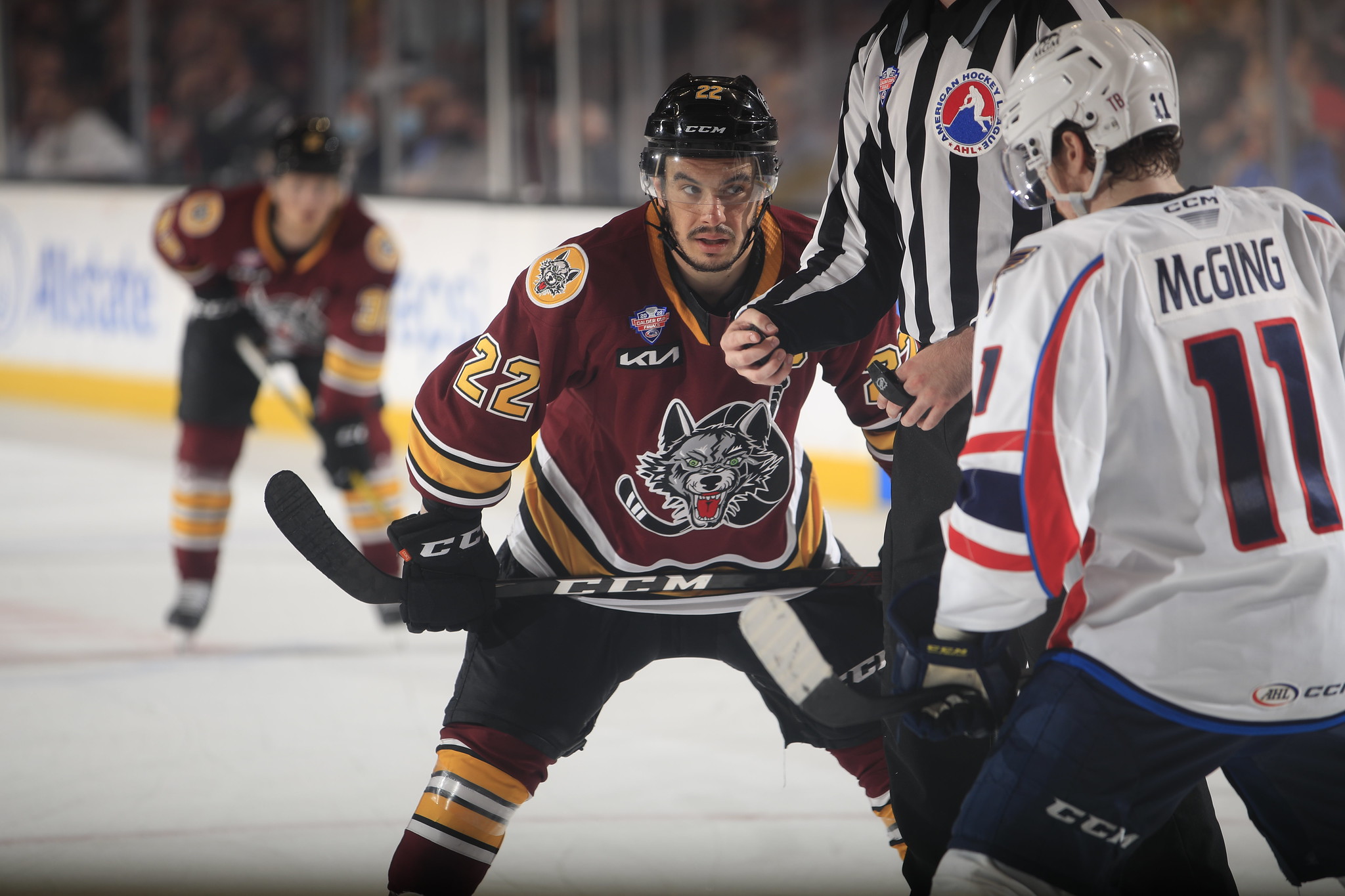 ROSEMONT, Ill. – Was it possible to fall into a must-win scenario in a Game 2? The aura surrounded the Chicago Wolves and their fans as they packed into Allstate Arena on Monday night for their pivotal match-up against the Springfield Thunderbirds. After dropping Game 1 and facing a three-game set with Springfield later in the week, the Wolves could absolutely not afford to fall behind by two games heading on the road.

On the back half of a back-to-back, both teams opted for different starters in net, each turning to their rookie phenoms in the cage. Chicago turned to Pyotr Kochetkov, coming off his Game 6 shutout in the Western Conference Finals to close out the Stockton Heat, while Joel Hofer led out the Thunderbirds. With the potential for seven games played in 10 days, both teams were expected to continue their rotation of goaltenders in this series.

Chicago came out of the gate flying with purpose, dominating Springfield to a 6-2 decision and evening the Calder Cup Finals at a score of 1-1.

It took all of 1:42 for the Wolves to get on the board in this one. Stefan Noesen threw a shot on Hofer from the half-wall, and the rebound was picked up by Richard Panik, who buried it for his fourth goal in the last six postseason games. It was the 13th time in 15 postseason games that the Wolves have scored the first goal.

Twenty-nine seconds after Panik’s goal, Spencer Smallman got the legs moving through the neutral zone and beat Hofer on the rush, and just as the game was getting started it was already 2-0 Chicago.

The next goal for the Wolves didn’t come until six minutes later this time around. Off the faceoff win, Joey Keane got the puck at the point, used his footwork to open up some space for himself, and fired a puck through traffic to beat Hofer and put the Wolves up 3-0 just 8:15 into the game.

It all starts in the face-off dot as Poturalski wins the draw and Joey Keane shoots through traffic from the line for his first of the playoffs! #SPRvsCHI @FieldPassHockey pic.twitter.com/FouE5IX4ld

From here on, frustration began to boil over for the Thunderbirds in the face of the Wolves’ early onslaught. Dakota Joshua laid a heavy check on Jack Drury from behind into the boards behind the Springfield net. This prompted a scrum to follow as the Wolves stood up for Drury, who was slow to get up following the dangerous hit. Drury would remain on the bench and the ice for the ensuing powerplay – a 5-on-3 coupled with Matthew Kessel‘s high stick on the same shift.

Chicago would exact their revenge on the scoreboard. After Andrew Poturalski‘s stick broke on a shot attempt, the Wolves regrouped, and Poturalski would freeze the Springfield killers with a fake shot and pass to Josh Leivo for the buried goal and a 4-0 lead. An assist that won’t show on the scoresheet for the Wolves’ trainer that was able to react and get a stick to Poturalski to make the goal happen. Leivo’s goal marked his 12th of the postseason, leading the American Hockey League in that category.

Josh Leivo takes advantage of the power play after a savvy play to get Poturalski a new stick. 4-0 Wolves just over halfway through the first! #SPRvsCHI @FieldPassHockey pic.twitter.com/X4U8TOSG7Z

Springfield had a late push to the period to try and claw their way back into this one and have something positive to build upon, but Kochetkov remained dialed in despite the lack of work for him early on in this period. Batting pucks awa out of mid-air, the young Russian netminder kept cool in his net, and mercifully for the Thunderbirds the period ended before Chicago could put any more pressure on Hofer.

Chicago wasn’t done with their offensive attack, however. Noesen stole the puck in the attacking zone along the boards, wound up as if he were to take a slap shot, and instead found Poturalski back door for an easy tap in to make this game a 5-0 rout.

Andrew Poturalski has been dishing passes all night, this time the puck comes to him from Noesen to make it 5-0. #SPRvsCHI @FieldPassHockey pic.twitter.com/esgJZrn937

So Chicago may have believed. Eight minor penalties by both teams followed, including an extra roughing penalty on Chicago as a result of a scrum behind their net that head coach Ryan Warsofsky visibly chastised the officiating crew for. On the resulting power play, Calle Rosen was able to get a shot from the point through traffic to beat Kochetkov and the Thunderbirds were finally on the board.

Just over two minutes later, Will Bitten on the side of the net was able to jam another puck through Kochetkov and just when it seemed like Springfield was knocked out of this fight they showed signs of life.

Will Bitten is making things interesting as he jams this puck in at the side of the net! #SPRvsCHI @FieldPassHockey pic.twitter.com/IkHu4BUycE

Considering the Wolves’ issues with discipline and Springfield’s ability to rally, this game went into the second intermission with the uneasy feeling for Wolves fans that this one that should have been put away wasn’t done just yet.

Neither team could grab the momentum starting out in this period as both Hofer and Kochetkov held their ground in the crease. That frustration continued to build for the visitors as scrums and slashes followed virtually every whistle in the final frame, trying to goad the Wolves into another minor where they could perhaps take the advantage. On a slash by Klim Kostin, however, the Thunderbirds would be the ones sitting in retaliation and the Wolves striking once again. Poturalski stole the puck in the neutral zone, attacked with speed and found Drury in the slot. When everyone in a white sweater thought Drury would shoot, he instead gave it to his linemate Leivo, who tucked it through Hofer for his league-leading 13th goal of the playoffs.

Is there anything Andrew Poturalski can’t do? He stops what looked like an odd man rush shorthanded and sets up Josh Leivo to make it 6-2! #SPRvsCHI @FieldPassHockey pic.twitter.com/epuO9g3Cdn

Leivo’s goal effectively buried the Thunderbirds on the scoresheet, but the fight was still to be had all over the ice. Tyler Tucker and Jamieson Rees found themselves getting matching roughing calls for a scrum. Even a goalie got into the action, and Wolves fans wouldn’t be surprised to find Kochetkov mixing it up with Bitten following a collision in his crease.

When the smoke cleared, the Wolves walked off the ice with an emphatic 6-2 victory to tie this Calder Cup Final at 1-1 heading on the road to Springfield.

This series heads to Springfield for Game 3 on Wednesday, June 22. Games 4 and 5 will be played back-to-back on Friday and Saturday. All game times are 7:05 EST.