Oilers Bounce Back With Super Win 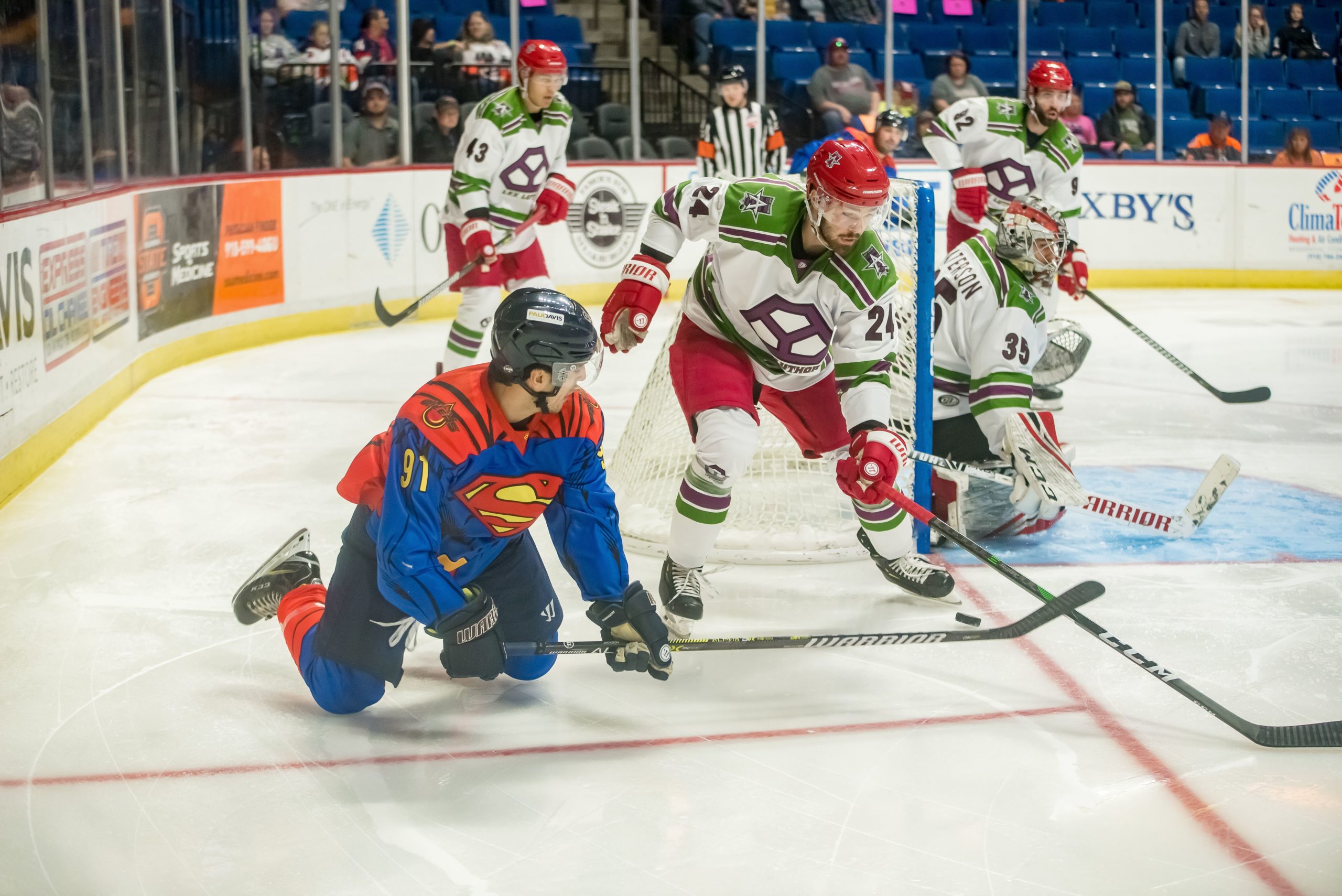 TULSA, Okla. — It was only fitting that Sunday afternoon was designated as “DC Heroes Night” for the Tulsa Oilers as they would need a superhuman effort to redeem themselves after dropping a 6-3 loss to the Allen Americans on Saturday night, but they made it happen.
Clad in the uniform of the Man Of Steel, the Tulsa Oilers overcame an early two-goal lead by Allen to rally past them and come away with a sound 5-2 win over the division-leading Americans in front of 4,106 in the BOK Center. First to strike were the visitors, as Tyler Sheehy solved Oilers goalie Devin Williams by sending the puck over his blocker after a hard hit in the corner.
Gabriel Gagne added to the Americans lead three minutes later when he took a feed from Olivier Archambault and just like that the Oilers were in a two-goal hole looking up, needing to reach within themselves to pull out of it. It was a subject that head coach Rob Murray covered with the team before the game started on Sunday.

“After (Saturday) night’s game I was looking for a bounce-back game from a lot of guys, and I got that,” said Murray, who talked with his team about their effort before the game. “They showed a lot of character. I am not going to name names, but I singled them out before the game, and they rose to the occasion.”

First to take Murray at his word was Josh Wesley, who slammed the puck past Allen goalie Jake Paterson from the point on the power play in the second period, beginning a scoring eruption from Tulsa that would carry through the rest of the game. Second to score for the Oilers was Dakota Joshua, who netted the equalizer by drawing the puck close into his body before firing it past Paterson to pull the clubs even in the middle period.
From there, it was all Oilers. Wesley scored his second goal on the night, and his fourth through the two-game series, at 2:54 of the final period when he slipped in a wraparound attempt by Adam Pleskach to pull his club ahead. Wesley had high praise for Pleskach and defenseman Miles Liberati, who assisted on both of his goals Sunday night.

“Liberati and I had been talking and he told me to just shoot the puck on the faceoff and it worked out perfectly.” Wesley said. “It went right to him and he passed it over and I let it rip. (On the second goal) I was in the right place and shot it and it hit the goalie’s shoulder and went in.”

Joshua also got a second goal on the night when he reeled in a cross-the-crease feed by Ian McNulty to lengthen the Oilers lead to two goals, and the scoring wrapped up when Cam Knight, fresh from sitting a tripping penalty rushed in on an empty net that Paterson had vacated to give the Americans a 6-on-4 power play advantage, was pulled down as he approached the Allen goal, which by rule gave Tulsa an automatic goal and the victory.
It was a good bookend to the stale performance the Oilers had turned in on Saturday night, a fact not lost on coach Murray. He also pointed to Wesley and Joshua as keys to his teams’ victory.

“For us to get the power-play goal by Wesley in the third and Dakota getting his second one (was big),” Murray said. “(Wesley) must have had eight blocked shots. He is doing everything he can to help the team have success. That exemplified everything we talked about prior to the game concerning commitment. It was a big swing in momentum.”

In goal, Williams turned aside 27-of-29 shots sent his way, while Paterson saved 28 of 32 shots. Tulsa’s next opponent will be the Fort Wayne Komets, who will visit the BOK Center on Friday, December 6.
You can keep track of both the Oilers and the Steelheads all season by following us on Twitter. Simply follow @SinBinOilers for the Tulsa take and @SinBinNews for all your AHL, ECHL, and SPHL news and notes.