Oilers Bring It All Together Against Idaho

TULSA, Okla. – On Friday night at the BOK Center, the Tulsa Oilers played one of their more complete games against an opponent, handing a 4-1 defeat to the Idaho Steelheads. 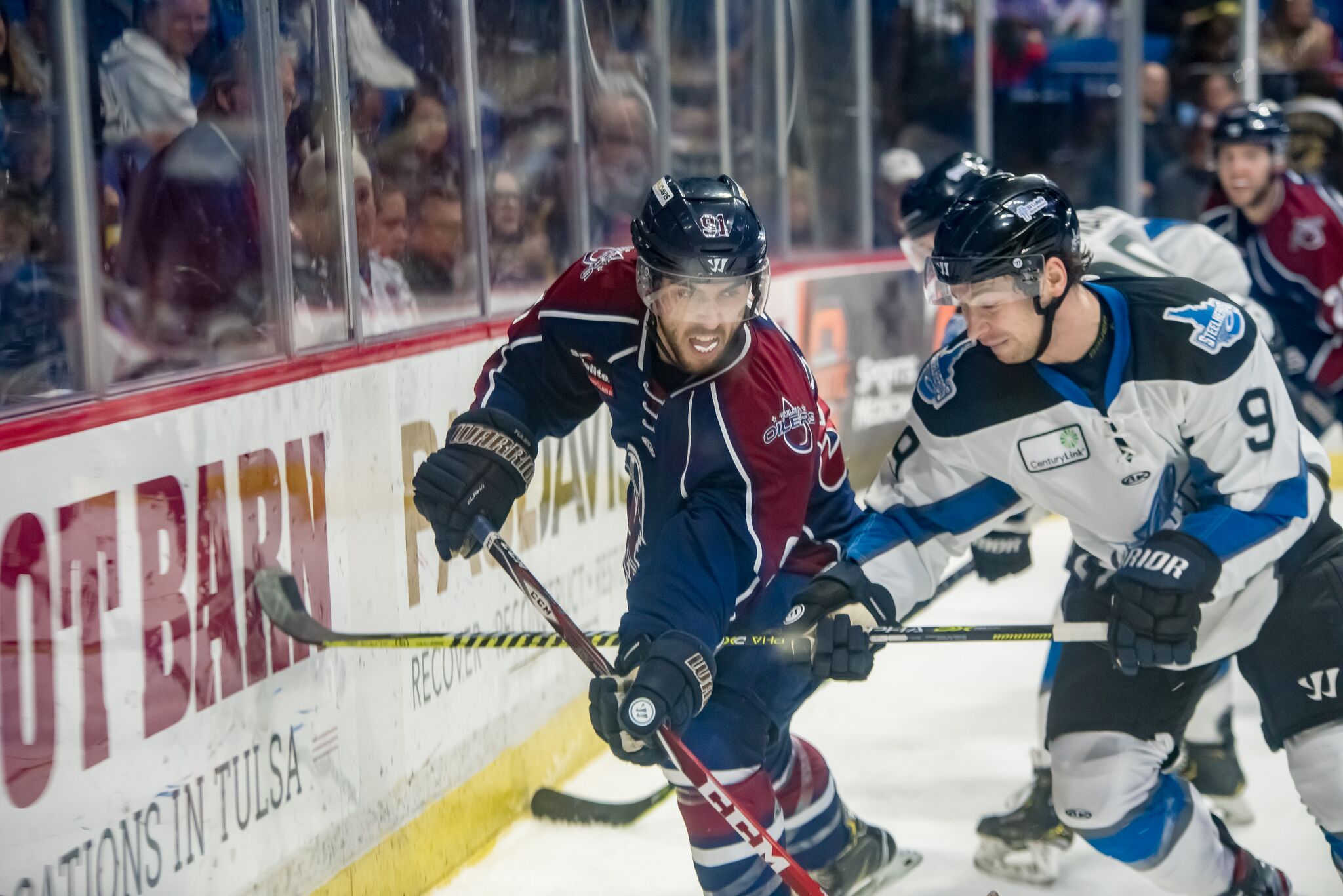 TULSA, Okla. – On Friday night at the BOK Center, the Tulsa Oilers played one of their more complete games against an opponent, handing a 4-1 defeat to the Idaho Steelheads.
It took just under six minutes for the Oilers to strike first when Danny Moynihan put in an off balance shot past Idaho goalie Thomas Sholl to give his side a lead. The goal ties Moynihan with fellow linemate Robby Jackson for the team lead in goals this season. Jackson had an assist on that goal, as well.
Idaho tied the game around the 15-minute mark when Jeff King nudged the puck through Tulsa goalie Devin Williams after it had come to a stop near the net.
In all, the scoresheet was dominated by the Oilers, who never surrendered the lead to the Steelheads in the game.
Cory Ward redirected a Cam Knight shot to give Tulsa a lead about 90 seconds into the second period. Jack Nevins, in his first game as an Oiler after being traded from Florida, stole a loose puck, glided in and around Sholl’s net and slipped it in on the wrap-around.
J.J. Piccinich sealed the deal with an empty net goal at 18:41 of the third and that was all she wrote. The Oilers had put together a full sixty minutes of smart hockey that helped them remain perfect against the Steelheads thus far this season.
Tulsa outshot Idaho 31-28 in the game and in two of the three periods in the contest. It was a surprisingly clean game with only six minutes of penalties between the two teams. Williams turned away 27 of 28 Idaho volleys at his net, and Sholl also made 27 saves on 30 Tulsa shots.

“We played well,” Oilers head coach Rob Murray said.”Our tenacity on the forecheck, our puck possession, and our exits out of our zone were excellent. It’s probably as complete a game as we’ve played this season. We made a lot of smart hockey plays out there tonight.”

Murray also had high praise for two of the newest members to the Oilers roster, commenting on the change in chemistry due to players leaving to AHL San Antonio.

“The dynamic of Cory Ward and Jack Nevins is something that we’ve probably lacked all season long.
“It’s more a symptom of what we had with all the affiliate players we had at the beginning of the season, and now we don’t have any at all. They (Ward and Nevins) are guys who don’t necessarily always show up on the scoresheet, but put in a solid game.”

Tulsa improves to 14-18-2-1 on the year with 31 points. Idaho falls to 19-11-3-2 with 43 points. The two teams will square off again two more times in Tulsa this weekend: Saturday at 7:05pm CST and Sunday at 4:05pm CST.
Follow both Rich Lohman and Cameron Turner on Twitter (@SinBinOilers) for live, in-game coverage and all other news and notes regarding the Tulsa Oilers!
Don’t forget to follow The Sin Bin on both Twitter and Facebook for all additional AHL, ECHL, and SPHL minor league hockey news coverage!