TULSA, Okla. – The Tulsa Oilers were looking for a fourth straight home victory inside the BOK Center on Saturday. 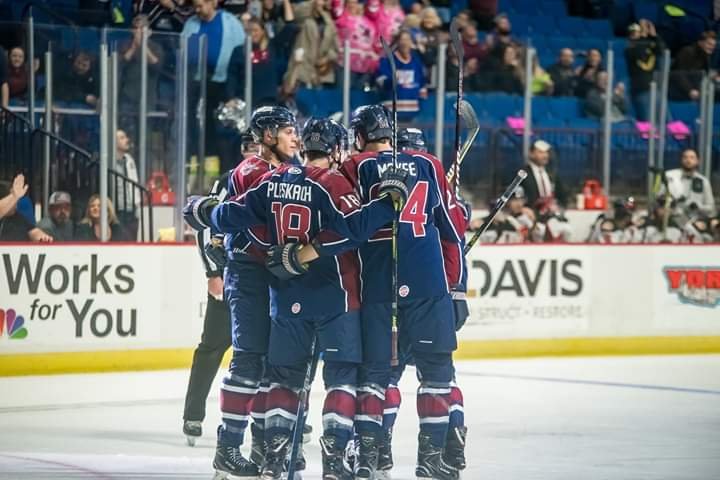 TULSA, Okla. – The Tulsa Oilers were looking for a fourth straight home victory inside the BOK Center on Saturday. It may not have been pretty, but mission accomplished.
Tulsa had been on its A-game from the beginning of game one in the three-game set against visiting Idaho on Friday, but that was not the case on Saturday. Instead, the Oilers were a step slow in the opening frame and were fortunate to escape with the game still scoreless. Tulsa was outshot 10-5 in period one, but Olle Eriksson Ek was there for his team and stopped all ten Steelheads shots. The only puck that eluded him slammed harmlessly into the post and the damage was averted.
Oilers Head Coach Rob Murray spoke with The Sin Bin afterwards about the slow start.

“I thought we escaped the first period quite honestly. I don’t know that they had really, really good chances but they outplayed us in the first. We were soft. We didn’t kind of bring what we brought last night right off the hop.
“But, like I said, we survived the first and were better in the second and then I liked our third. We played smart hockey again when we had to: winning battles along the walls, getting pucks out, and scoring obviously when we had to.”

The action picked up in a big way in period two, with each side striking twice in the segment. The opening salvo came 5:44 into the period when Miles Liberati spotted a wide-open Adam Pleskach behind the Idaho defense. Liberati’s feed sent Pleskach in all alone and the Tulsa captain made no mistake in wiring a shot underneath Idaho goaltender Colton Point to give the home squad the 1-0 edge.
The lead was not to last long at all, however, as just 16 seconds later Colton Saucerman took a pass from Jeff King and sent a rocket that beat Eriksson Ek high to even the score. Idaho then found a lead just under five minutes later when King found A.J. White open in the slot. White ripped a wrister through the five-hole of Eriksson Ek to make it 2-1 Idaho with 9:19 to play in the middle stanza.
Tulsa was quick to respond, though, with the captain playing a major part once again. Pleskach had the puck in the far corner and was scanning for options when he saw a lane to the top of the crease and the waiting stick of Jack Nevins open up. The pass was perfect, and the newcomer Nevins redirected it home for his second goal in as many games with Tulsa and his second point of the night. The goal came with 5:16 remaining in the frame and sent the game to the third even at a pair apiece.
The final frame was a competitive battle between to determined teams, but with the chips on the table, it was Tulsa who was found itself on Lady Luck’s good side and claimed the pot.
The eventual game-winner came on a power play just over seven minutes into period three when Jared Thomas sent the puck down low to an open Pleskach, who spied Robby Jackson at the back post and tried to slip him the biscuit. The pass hit the leg of Saucerman and ricocheted off the Idaho defenseman and into the net to give Tulsa a 3-2 lead it would not relinquish.

“Adam’s had kind of a tough year as far as getting on the scoresheet like he did last year,”  Coach Murray commented.  “but, he’s coming along now and scoring almost every game. The second goal, obviously he wasn’t trying to bank it off their defenseman and in, but that’s the way it went and we’ll take it.”

Pleskach finished the game with two goals and a helper to bring him to 26 points (10G+16A) on the season.  He broke down the winner when talking with us after the game.

“We had a power play and we hadn’t capitalized on the power play this weekend yet. So, Thomas got the puck to the goal line there and I kind of had all day. I actually tried to pass across to Robby Jackson and it went off the guy’s leg and into the net. So, kind of a lucky one, but we needed it and we hadn’t been getting those bounces. so, it’s nice to get a bounce like that to win the game.”

The Oilers did a fantastic job of pinning the Steelheads 200 feet from Eriksson Ek down the stretch, frustrating the guests from Boise and preventing them from even sniffing an equalizer. Idaho didn’t get Point pulled for the extra man until just 44 seconds remained. Then, the visitors immediately took a minor and forced Point to return. The Steelheads never got him off the ice a second time. Tulsa killed the clock with expert-level efficiency and left with a 3-2 win.
Murray was thrilled with his team’s ability to play keep away and lock down the victory.

“That was great. You know, in a way you’re expecting the team that’s ahead to pull out and not pressure as much, and you could almost see that they were surprised we were keeping up our pressure on the forecheck. The last five minutes there they really didn’t hardly get out of their zone. We did an excellent job.”

Eriksson Ek also spoke after the game about the way his squad closed it out.

“Yeah, that’s huge. We had a few guys working really hard. The Ples line was keeping it deep all the time and it was really huge for us to help us get a win for sure.”

With the win, the Oilers are 3-0 against Idaho this season and have also now been successful in four straight home contests. Tulsa has won four of five at home overall and is 7-3 in the last ten games played in the 918 area code. The Oilers will need to keep the home cooking coming — they play the next four at home against Mountain Division opponents.
Pleskach says that while the mood in the locker room is a good one after starting the weekend with four points, they know the job is far from done on the homestand.

“It’s good, but we know we need six. We have six games in a row here at home and we’re obviously in a hole right now. There’s a couple teams just ahead of us all kind of in a logjam, so we’ve gotta get ourselves into that position and Jimmy our way on top of that logjam and I think we’ll be good. But, like I said, we’ve got two of the first six at home, and we need to get as many points as possible here at home.”

You can follow the Oilers all season by following us on Twitter where we live tweet each game. Simply follow @SinBinOilers for our Tulsa take, and @SinBinNews for all your AHL, ECHL, and SPHL news and notes.