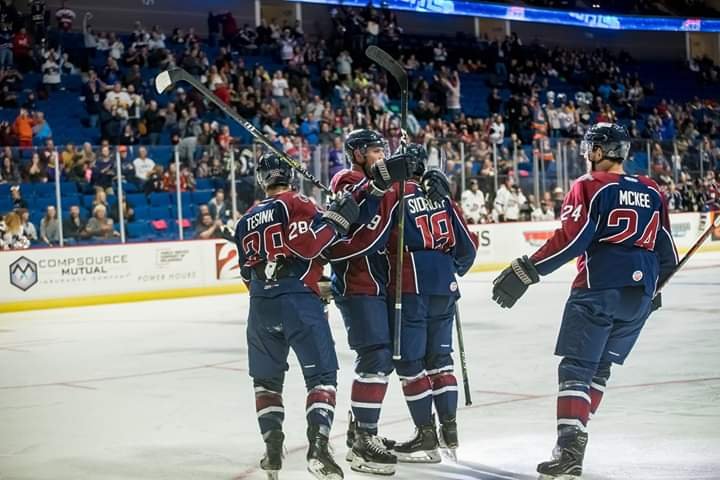 Oilers Hang On to Secure Midweek Sweep of Swamp Rabbits

The Tulsa Oilers once again played host to the Greenville Swamp Rabbits on Thursday, after claiming an 8-2 win over their guests from the East on Wednesday.

Oilers Hang On to Secure Midweek Sweep of Swamp Rabbits

TULSA, Okla. – The Tulsa Oilers once again played host to the Greenville Swamp Rabbits on Thursday after claiming an 8-2 win over their guests from the East on Wednesday.  There wouldn’t be back-to-back easy victories for the Oilers, however.
The first of the rare two-game set between the cross-conference foes saw a much-needed offensive explosion for the Oilers.  Tulsa gave up the first goal midway through period one but led 4-1 by the end of the frame. By the time 40 minutes had elapsed, the Oiler advantage was 7-1, and the game was essentially over.  The eight goals were the most of the young season for Tulsa, surpassing the five scored against Kansas City on opening night.
Three players had three-or-more points to pace the Oilers on Wednesday, led by J.J. Piccinich, who had a goal and three helpers, and Charlie Sampair, who posted a hat-trick for his first three tallies of the season.  Brent Gates Jr. also had the Midas-touch offensively for Tulsa, as he accumulated three assists for his first multi-point night in the ECHL.
The second meeting in as many days was a different story, as Greenville came out with a renewed focus on establishing a slower, more defensive pace from the outset.  The two teams combined for just 11 shots (Greenville held a 6-5 edge) over the first 15 minutes before the offenses began to wake up a bit. The first period closed with Tulsa holding a 12-9 advantage.
The only goal of the period one came just 2:13 in, and it was generated thanks to a robust forechecking effort from Piccinich and a second of hesitation from Greenville goaltender Ryan Bednard.  Bednard went behind his net to cut off a dump-in along the boards, but he didn’t notice number 16 in navy swooping in from behind.  Piccinich took the vulcanized rubber off the stick of Bednard and immediately turned and whipped the puck towards the crease. His effort was rewarded when his centering attempt went off the stick of a Greenville defender and in to make it 1-0 Tulsa early.
That lead carried over to period two for Tulsa, but unfortunately, so did a minute of penalty kill time from a late-first infraction.  The Oilers were able to kill the minor off, but not without the Swamp Rabbits building momentum that resulted in a tie game moments later.
The equalizer came with a delayed call pending on Tulsa 2:52 into the second segment, and just 1:47 after the previous Greenville power play had ended.  The puck was fired through traffic from the point by Nathan Perkovich and was tipped in by Liam Pecararo.  It was Pecararo’s impressive and team-leading ninth goal in just the eighth game of the Swamp Rabbit season and leveled the score at one and one with almost two full frames to finish.
The game didn’t stay even for long, as Tulsa was able to pull back in front just under four minutes later.  The breakthrough happened after Miles Liberati won a puck battle by nudging the biscuit over to Adam Pleskach, who immediately directed the puck to a salivatingly wide-open Robby Jackson.  Jackson took his chance and didn’t miss, as he sent a one-timer past Bednard to give Tulsa a 2-1 lead.
The Oilers expanded their lead with 2:18 remain in the middle period, when they cashed in a huge power-play tally to establish a little cushion that would come into play later on.  The goal was once again an open one-time blast from the top of the slot, with Liberati stepping up from the point. Liberati’s marker was his third of the season and gave the Oilers a two-goal edge to play with in the final frame.
The insurance marker couldn’t have been more valuable, as Tulsa proceeded to sit back and allow Greenville to load up and pepper Evan Fitzpatrick in a sustained attempt to find a way back.  The visiting Swamp Rabbits held a 19-5 edge in shots in the third and created four or five premium chances that looked for all the world to be heading home after a cross-ice pass only for Fitzpatrick to get post-to-post in a flash to deny the guests.  He finished 18-of-19 in the third and 36-of-38 overall to claim his first win of 2019-20.
The Rabbits were able to pull one back when Cedric Lacroix redirected a long-range offering at the last second to send it past Fitzpatrick and bring the visitors within a goal with 7:51 still to play.
That was all Greenville could manage, however, as Tulsa killed two late power plays, including nearly a minute of 6-on-4 time with Bednard on the bench.  Dakota Joshua blocked the final shot attempt with two seconds on the clock, and the hometown heroes held on for the Halloween win.
With their second-straight win, the Oilers now have at least a point in three games running to improve to 4-6-1-0 (9 points) on the campaign.  Tulsa will have now Friday and Saturday off before hosting the Rapid City Rush for a third Sunday afternoon in a row to open the year. It is already the fourth meeting between the Oilers and Rush inside the BOK Center this season, with the visitors winning all three to move to 16-4-0-0 all-time in ECHL action in Tulsa.
You can follow along with the action on Sunday, as you can all season by following us on Twitter.  Follow @SinBinOilers for our Tulsa take, and @SinBinNews for all your AHL, ECHL, and SPHL news and notes.