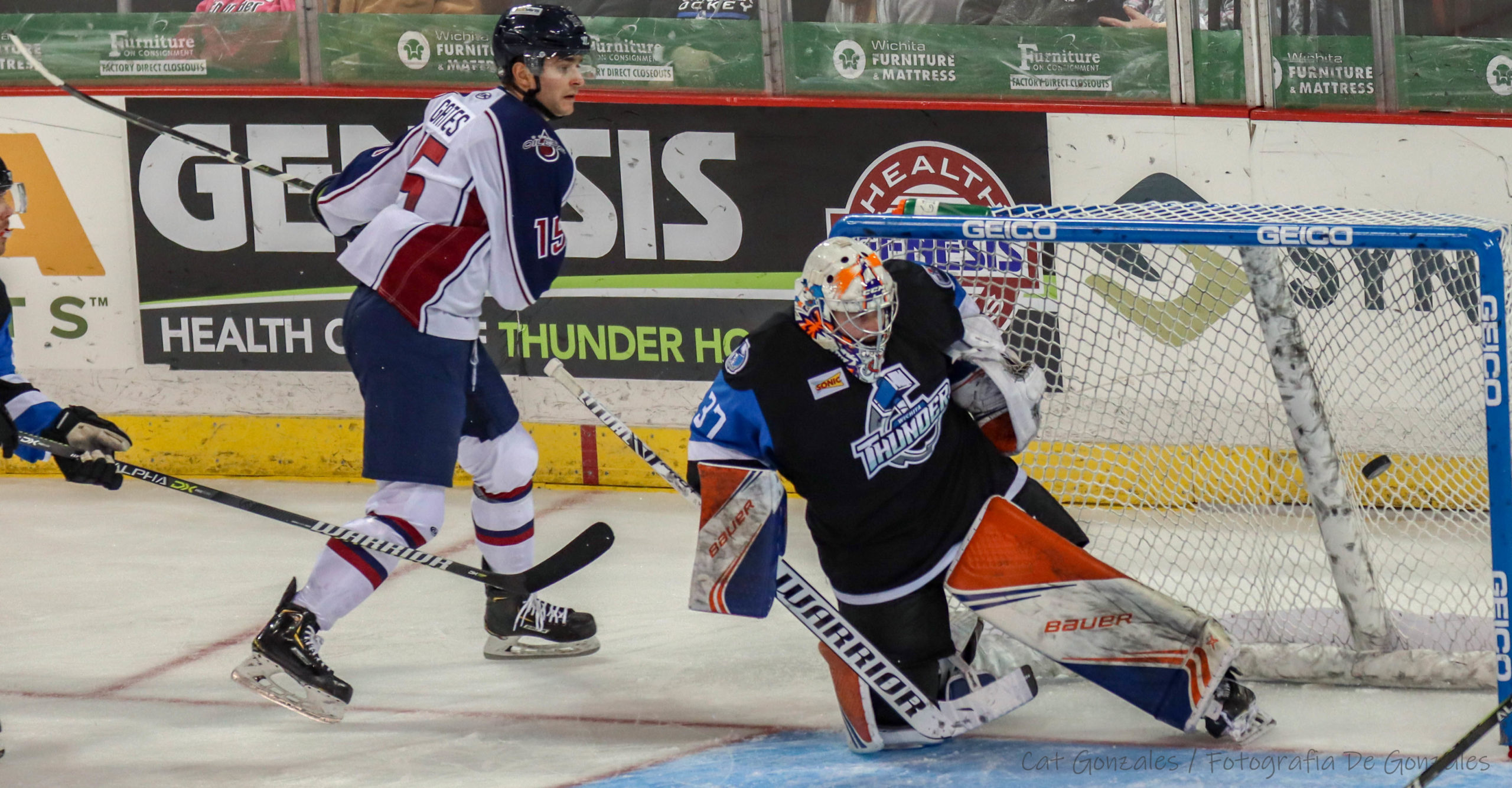 WICHITA, Kan. – It was ‘break not bend’ for Wichita on Wednesday night, as Tulsa put up seven on the Thunder for the second consecutive time. The Oilers defeated Wichita 7-2 to pull within four points of fourth place in the Mountain division.

WICHITA, Kan. – It was ‘break not bend’ for Wichita on Wednesday night, as Tulsa put up seven on the Thunder for the second consecutive time. The Oilers defeated Wichita 7-2 to pull within four points of fourth place in the Mountain division.
After a fairly neutral first half of the first period, Miles Liberati got the Oilers on the board with just over seven minutes left in the first. The play was made possible after J.J. Piccinich, the league leader in points, shook two Thunder defenseman off and passed to an open Liberati in the slot.

The 1-0 lead held true to the first intermission break, Tulsa also outshooting the Thunder 16-9.
It did not take long to double the lead in the second. Just 2:39 into the second, captain Adam Pleskach scored his third goal of the season, deflecting a shot in front of Gillam.

Gates added a second goal before the period expired, a broken play from Brendan De Jong in front of Gillam that gave Gates two rebound attempts to cash in on.
As the second period hit its 20th and final minute, Peter Crinella scored his third of the year, a rebound backhand that beat Devin Williams.

The second would end 4-1 even after Wichita outshot Tulsa 12-9 in the period. Wichita laid 19 hits in the second but failed to turn the physicality into more offense.
Yet again, Tulsa started a period hot, scoring just 2:22 into the third period as Jared Thomas net his third goal of the year, a bottle-popping one-timer.

The Thunder pressed hard and put many solid attempts on net throughout the opening minutes of the third, even after the goal.
Wichita answered four minutes later as Spencer Dorowicz scored on the powerplay after a great, mid-crease pass by Jack Combs.

Following the goal, the Thunder slowed down significantly, not earning as many quality scoring chances and getting lazy in the back end.
At 11:03, Dorowicz went off for a trip, leading things downhill for Wichita. As the powerplay was about to expire, Pleskach scored his second of the night, giving the Oilers a 6-2 advantage.
Bad got worse 1:10 later as Danny Moynihan skated unopposed to the crease and beat Gillam to score the seventh goal of the night for Tulsa.
Wichita played too conservative in the final six minutes allowing many quality scoring chances to Tulsa and getting beat in 1-on-1 puck battles.

“I Don’t think we had everybody pulling on the rope at the same time right now…,” Head COach Bruce Ramsay Said. “If we’re not all playing as a unit together, we’re gonna have a harder time finding success.”

Tulsa carried the lead to a 7-2 win, outshooting the Thunder 36-34. Tulsa blocked 15 shots, seven of which came in the dominant second period. Wichita outhit the Oilers 43-27 while Tulsa won 34 of 59 faceoffs (58%).
Each powerplay unit finished 1-for-1 on the evening, both powerplay goals coming in the third period.
With the win, Tulsa inches closer to Wichita in the standings, now four points out of fourth place.
Wichita welcomes the Kansas City Mavericks to town this weekend for a Friday/Saturday two-game set. The Sin Bin pregame show begins at 6:30pm while puck drop is scheduled for 7:05pm.
For the very latest news on the Wichita Thunder, follow us on Twitter (@SinBinThunder). And for the latest news on the SPHL, ECHL, and AHL, follow @SinBinNews.

Please consider becoming a Patron as a way to say thanks and support us for what we do! https://www.patreon.com/thesinbinhockey