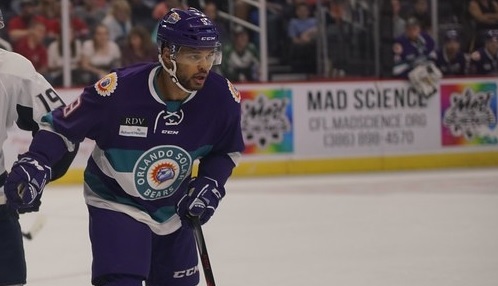 DENVER – Just as the drama from one public relations headache subsides, another arises for the AHL’s Colorado Eagles.

DENVER – Just as the drama from one public relations headache subsides, another arises for the AHL’s Colorado Eagles. A little over six months removed from the news that the Eagles and CEO Martin Lind essentially held the Kelly Cup ransom over a dispute concerning ECHL exit fees, Colorado now has a whole new set of problems after disturbing revelations from a former player.
As The Sin Bin reported Wednesday, a Wall Street Journal article chronicled a 2011 incident where former Eagles defenseman Akim Aliu was portrayed in blackface at a Halloween party by current equipment manager Tony Deynzer. Colorado issued an open apology to Aliu through social media, and Deynzer has been placed on “an administrative leave of absence” by the Colorado Avalanche organization pending the outcome of an investigation, which is underway.
The two stories gaining national media attention for the Colorado Eagles come from two very different places. There is a wide chasm between an organization’s dispute over transfer fees and a glaring instance of racial insensitivity. The former highlights a specific grievance held by an organization and its owner, while the latter shines the spotlight on a larger problem in the sport of hockey — that of systemic racism.

RACISM AN ISSUE AT ALL LEVELS

Bill Peters resigned as Calgary Flames head coach in late November after admitting he had used a racial epitaph towards Aliu when both were a part of the AHL’s Rockford IceHogs during the 2009-2010 regular season. Four Chicago Blackhawks fans were ejected from a game in February 2018 for using racial slurs to taunt Washington Capitals forward Devante Smith-Pelley, who is African-American. Lastly, from my own personal media coverage and experience, an Idaho Steelheads booster club member shared with me that racial remarks were shouted at then-Idaho defenseman Zachary Yuen during road games in the 2015-16 season (Yuen is of Canadian-Chinese descent).
These fairly recent examples of racist behavior in hockey happened at the top three levels of the North American pro hockey system (NHL, AHL, and ECHL). No doubt, they are a small sample of many tales, both told and untold, of bigoted action from staff, fellow players, and fans towards hockey players who don’t happen to be white.

HOCKEY HARDLY A KALEIDOSCOPE OF RACE

The sport of ice hockey is notorious for having a large majority of white players — be it of the American, Canadian, Russian, or European variety. Such non-white pioneers like Willie O’Ree and Grant Fuhr paved the way for black, modern-day skaters like P.K. Subban, Seth Jones, and Wayne Simmonds. Current players of Latino (Auston Matthews and Al Montoya) and Middle Eastern descent (Justin Abdelkader, Nazem Kadri, and Brandon Saad) should also be included, as well.
Whether down in the early stages of minor ice hockey or at the highest level of play in the NHL, there will be minorities of different races, cultures, and countries playing there. The antiquated notions held by hockey personnel regarding non-white players are being brought into the light more and more each day. The NHL is putting forth an effort with its “Hockey is for Everyone” campaign, where the goal is simple:

“We believe all hockey programs – from professionals to youth organizations – should provide a safe, positive and inclusive environment for players and families regardless of race, color, religion, national origin, gender identity or expression, disability, sexual orientation and socio-economic status.”

In spite of the mission behind “Hockey is for Everyone”, cringe-worthy moments are still being brought to the attention of the press and public alike as players step out of the dark with their stories. Aliu isn’t the first, and sadly, probably won’t be the last to come forward with an account of racial insensitivity in the world of hockey. The goal now is — whether as personnel, players, journalists, fans, or anyone else involved in the sport — to broadcast and truly live out the desire for inclusion at all levels of hockey. We cannot allow people to further a narrative of hatred and bigotry in a sport — and a world — that is so much better than any excuse for exclusion.