Opinion: Sabourin shouldn’t be rewarded for running a goalie

Opinion: Sabourin shouldn’t be rewarded for running a goalie

TORONTO – I’ve never felt the need to write an opinion piece; I prefer to keep my mouth shut in many cases. After scrolling through Twitter and seeing many people siding with Scott Sabourin after running the goalie 23 seconds into Friday’s game, I wanted to make my opinion clear – Sabourin was in the wrong. End of story.

Sabourin spent last season with the Ottawa Senators. In his 35 games as a Sen, he produced six points (two goals, four assists) and accumulated 33 penalty minutes.

Starting with his time in junior in 2010-11, Sabourin has registered five seasons with 100+ penalty minutes, many of which he didn’t play a complete season. In his 509 games through the OHL, ECHL, AHL, and NHL, he has served more than 1,000 penalty minutes (2.02 per game, to be exact). His 17 minutes in Friday night’s game was nothing new to the 28-year-old. In fact, I’d beg it’s nothing shy of the norm.

One opinion I’ve gotten a lot of fan mail on is that there simply wasn’t any room for Sabourin to squeeze by the defender. The fact of the matter is – Sabourin has a pretty well-clear-cut break. Laval’s defence was quick to get back and catch up, but they never blocked off that much of a lane that Sabourin had to go barreling into Primeau.

Some will be quick to argue that the Cayden Primeau wasn’t in the crease. Though this is true for most of the play, Primeau was running a tactic that most goalies do, challenging the shooter. When Sabourin was in a close distance, Primeau was, at most,  six inches outside the paint.

Unquestionably, Primeau’s positioning was immature. Sabourin didn’t need to make a fancy move to open Primeau and have a left or right side to look at. Most AHL shooters know that. Sabourin didn’t get that memo and busted through the middle. 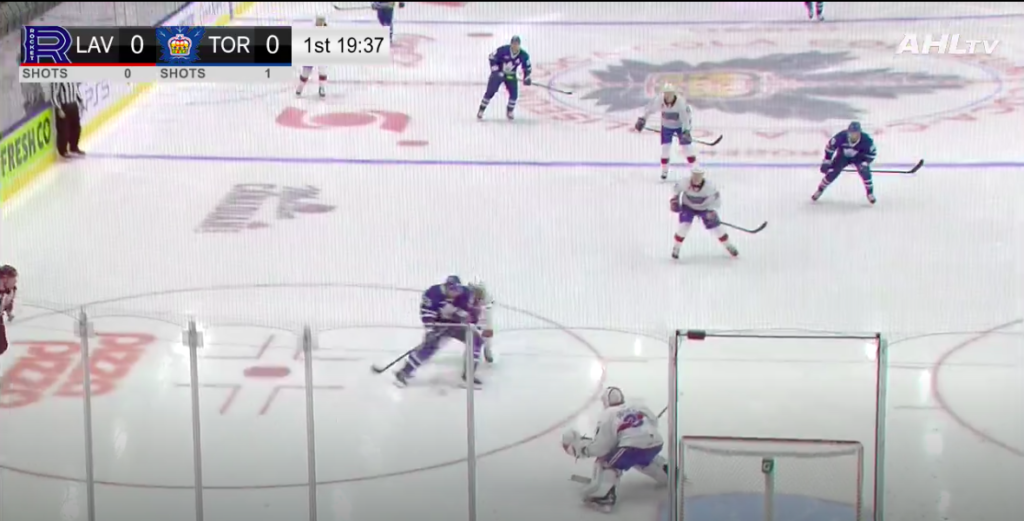 “But the defencemen pushed him into Primeau” seems to be a pretty common argument. There’s no doubt that the defencemen had feathered Sabourin; how much that affects an AHL player is the other question. Touched or not, Sabourin made no attempt to move out of the way and clear away from the crease; instead, Sabourin jumped off the ice, threw his shoulder towards Primeau on his knees and let his 192 lbs do the rest of the work. Primeau had no chance to move away from the freight train barreling his way. He somehow stayed in the game after receiving Sabourin’s shoulder to his ear.

Finally, just as bad, Sabourin spent no time looking for someone to fight.  That wasn’t enough for Sabourin, though; he was going to fight. So, he found the first person skating his way and dropped his gloves, and fought with someone standing still with gloves on. As it happened, Sabourin chose Laval’s leading scorer, Lukas Vejdemo, and tried to pick a fight.

The kicker? The Maple Leafs recalled Sabourin the next morning. Now, Sabourin will sit in the press box and get paid to watch hockey on the Taxi Squad. No, Laval won’t be able to seek revenge on Sabourin. No, the AHL won’t be able to get a suspension on Sabourin, or a meaningful one at that. Sabourin’s now protected from any kind of real backlash and will stay that way until he plays his next 23 seconds.

Zack Power covers the Toronto Marlies for The Sin Bin. Follow or interact with him at @SinBinMarlies