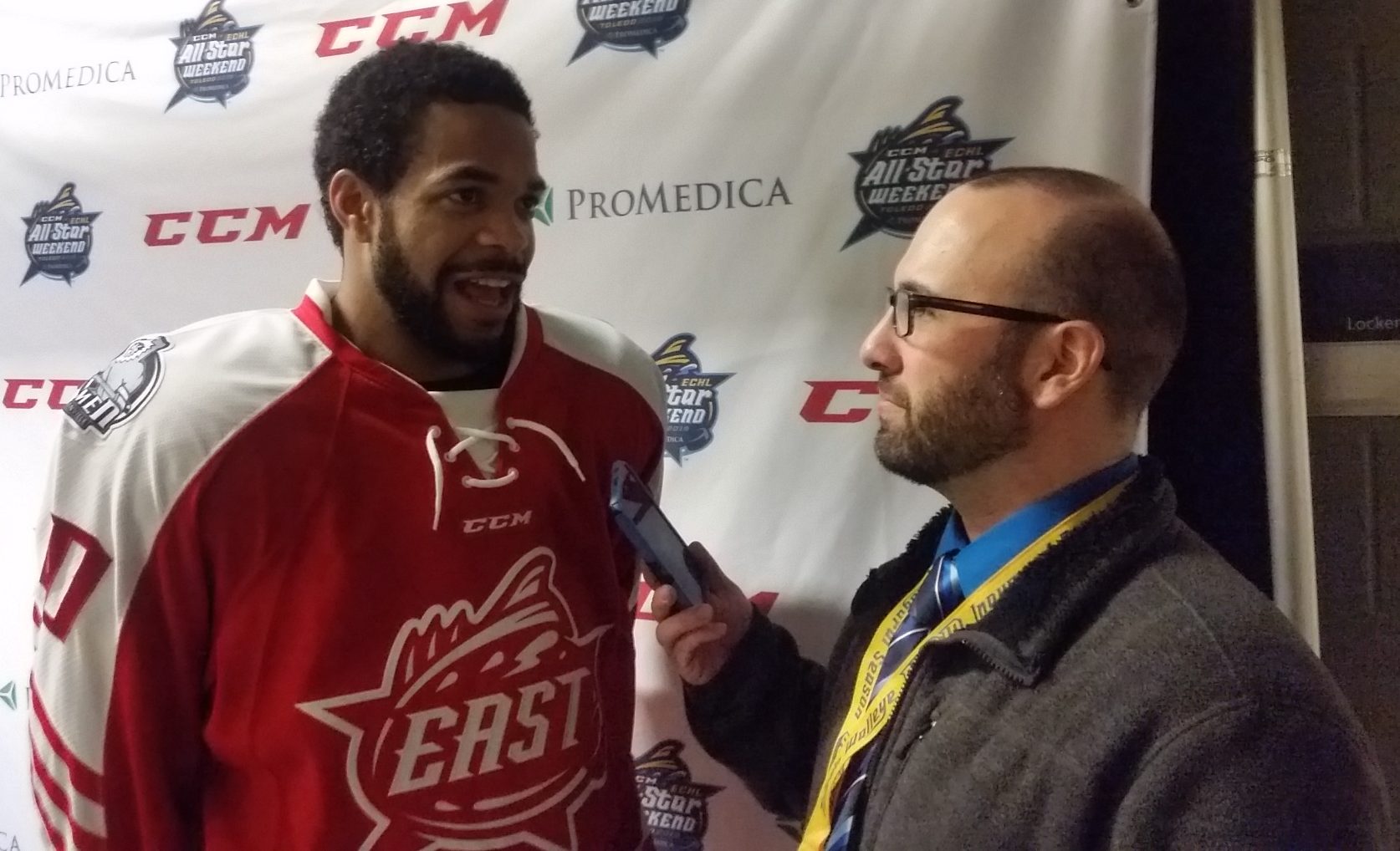 DENVER – Someone replied to one of my recent social media posts that gave reason for pause.

DENVER – Someone replied to one of my recent social media posts that gave reason for pause. Goaltender Tomas Sholl had just earned his 11th shutout for the Idaho Steelheads, becoming the franchise leader in shutouts in his three seasons with the club.  In my initial tweet, I gave praise to the netminder I covered in my first two seasons as a credentialed journalist in Boise. This didn’t sit well with a fan of the Utah Grizzlies (who just happened to be Idaho’s opponent that fateful evening).
“Come on now! They’re the enemy now!”
The individual’s outrage was somewhat justified. Now that I am covering the AHL’s Colorado Eagles, I am also following their ECHL affiliate in the Grizzlies. It was the second part of the exclamation, however, that really got to me: they are the enemy now. As a correspondent peripherally covering Idaho’s closest division rival, am I not allowed to compliment the opposing goalie when they’ve done a standout job in net?
Well, I’ve been doing it since the beginning. I’m nothing if not consistent in my praise, even if it involves a team outside the market I’m covering.
I pointed this fact out to another Utah fan after they commented on a post I’d made about The Sin Bin’s ECHL Trade Deadline Show. I was accused of being a “Steelheads fellow” through and through, told not to call myself “an AHL guy” quite yet, and that most of my social media content wasn’t about the Eagles anyway. After giving two fact-based and measured responses to the contrary, the person in question unfollowed my account and blocked me.
As they say, if you’re not making enemies, you’re not trying hard enough. But I digress…

In sports journalism (and journalism as a whole), unbiased reporting is crucial for the reader to get the most honest picture of whatever it is you’re writing about. Unless it is specifically classified as an opinion piece (like this very article), the goal of the writer is to give the clearest picture from all sides and to back it up with facts.
However, when you’re covering one team in a specific market, it can be easy to have fan-based websites that do not hide the fact that they’re pulling for said team to win. Quite frankly, I’ve seen a lot of good writing that has come out of such sites like Mile High Sticking and The Rink – Colorado here in the Denver area. There is a lot of quality journalism that can come from fan-centric websites.
This is why there is a fine line between writing stories with a biased bent and reporting from a fair perspective. As much as I’ve been impressed with how well that line gets walked, there are many out there who cannot take off the fan hat and write as an unbiased journalist. There are bloggers who can gush about their own team until they are blue in the face, but they can’t identify the weaknesses in their home market’s team and report on them like a serious correspondent. On the other hand, there are newspaper and credentialed writers that can be big-time homers in their coverage, so it can really go both ways.

HOW THE SIN BIN WALKS THE LINE

Here at The Sin Bin, we strive to maintain a balance in being a non-traditional sports media medium that exalts journalistic integrity above all else. You won’t see our correspondents up in the press box with team jerseys on, cheering or rooting for a specific teams in published articles or anywhere else, and — as I can attest to all too well — NEVER get nasty with fans or writers from other outlets on social media. There have been Team Sin Bin members who have done this in the past, and they were immediately dismissed for their unprofessional behavior.
We take professionalism very seriously on our website and beyond. The Sin Bin’s Writing and Photography Handbook (which every member receives upon joining our staff) chronicles how to craft an article in your own voice, the ins and outs of proper grammar & phrasing, gallery requirements for our photographer, and (last but not least) how to behave on social media when live tweeting a game or simply interacting with the general public. We pride ourselves on being a legitimate news outlet, and light years away from an overtly-biased fanatic blog.

THE RELATIONAL ASPECT OF CORRESPONDENCE

When you work for a recognized news website, you have the privilege of being a credentialed media member that gets to go to games, sit on press row with fellow journalists, and interview the players and coaches after practices and games. You get to spend time with both the hockey and operational staff, developing acquaintances and working relationships alike. And, being in either the AHL or ECHL, you want to see all these people do well and move on to the next level given the opportunity to do so.
That’s why I’ll never hesitate to speak about a guy like Tomas Sholl when he earns an AHL contract in 2019 after being down in the SPHL to start 2017-18. That’s why I’ll keep tabs on former Steelheads and Eagles players and celebrate their successes (even if they are playing elsewhere). That’s why I went out of my way to talk with San Antonio (and former Idaho) broadcaster Brian McCormack when he visited Loveland, and why I’ll try to do the same with Texas (and also former Idaho) Head Coach Neil Graham when the Stars visit Colorado on March 10.

I’m going to do my job as a hockey journalist and bring the fans the best coverage of the Colorado Eagles and AHL as a whole (with some Utah Grizzlies thrown in there, too). Because I’m still familiar with the beat, I’ll occasionally throw in an Idaho Steelheads or ECHL article as well. And, I’ll still quietly hope for these hockey hopefuls to keep climbing their way up the ladder and get to the big time…no matter what team they are on.
Follow C.C. on Twitter for all the latest in-game coverage, along with news & analysis, regarding the Colorado Eagles.
Don’t forget to also follow The Sin Bin on Twitter and Facebook for all additional AHL, ECHL, and SPHL minor league hockey news and insights!