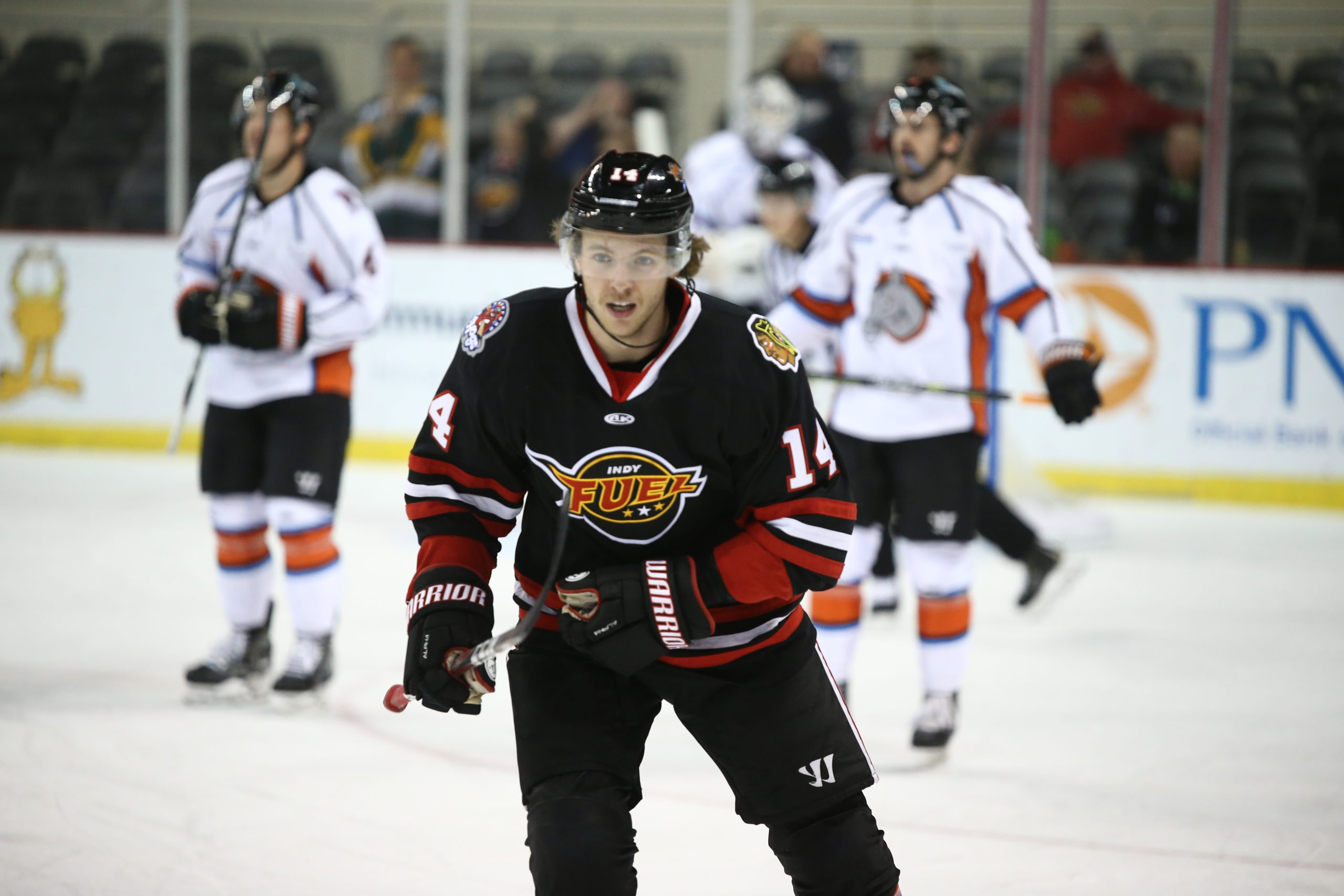 The Indy Fuel wrapped up a three-game homestand with a mid-week contest against the Kansas City Mavericks on Wednesday night.

INDIANAPOLIS – The Indy Fuel wrapped up a three-game homestand with a mid-week contest against the Kansas City Mavericks on Wednesday night. Chase Marchand got his fifth start of the season for the Fuel on Wednesday. He entered the game with a 2-2 record, along with a 2.52 goals-against-average and a .914 save percentage. Marchand was also coming off a huge 4-1 victory over their division rivals, the Cincinnati Cyclones. At the other end, Nick Schneider got his 10th start of the season for Kansas City. He entered with a 5-4 record with a 2.91 goals-against-average and a .894 save percentage.
Liam Coughlin got the scoring started for the Fuel, as he tipped in his first professional goal on a shot by Alex Krushelnyski on the power-play.

“I’ve been grinding in practice,” Coughlin said. “Finally that one popped in. A Nice little tip, so I’ll take it.”

Kansas City followed up the Coughlin tip-in with a beauty of a goal from Mitch Hults. Hults dangled around Indy defenders in tight on Marchand and he buried it for his fourth goal and 11th point of the season in just ten games.
Less than a minute later, newcomer Dylan McLaughlin, who had just been sent down from the AHL’s Rockford IceHogs earlier this week, netted his first professional goal on a breakaway pass from Bobby MacIntyre.

With 20 seconds remaining in the opening frame, Keoni Texeira ripped a shot from the blue line that was tipped in by Krushelnyski short side on Schneider. That Krushelnyski goal was his second point in the first period.
Only one goal was scored in a somewhat quiet second period. That goal was tallied by the Mavericks, as Corey Schueneman floated the puck past Marchand from the blue line to cut the Indy lead to 3-2 just 4:52 into the middle frame.
An injury-riddled couple of minutes led to an injury for both teams. A huge hit from Texeira left Mavericks forward Greg Betzold shaken up and holding his collarbone. He immediately left the ice.
Not long after that, Fuel defenseman Tim Shoup got leveled along the boards and left the ice holding his ribs. He would return to the ice later that period, though.
An untimely penalty from Mathew Thompson and a pretty pass from Mitch Hults led to a Kansas City power-play goal from Bryan Lemos with four and a half minutes remaining in regulation.
Ultimately, the Fuel would finish off Kansas City in overtime, as MacIntyre sprung on a breakaway and forward Graham Knott followed up and put the rebound home past Schneider to win the game for Indy 4-3.

The Fuel take their three-game winning streak on the road, where they play eight of their next nine games starting Friday, when they take on the Stingrays in North Charleston, South Carolina.