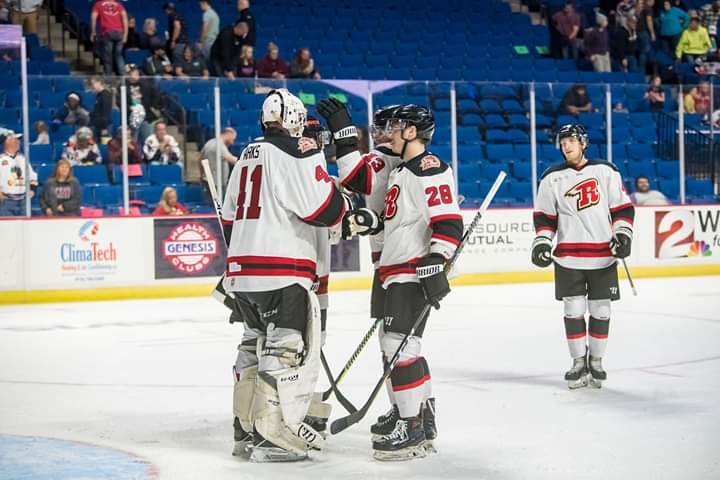 TULSA, Okla. –  The Tulsa Oilers played host to the Rapid City Rush in a chippy and penalty-filled contest on Saturday night inside the BOK Center.  Rapid City led just 2-0 after 40 minutes, but frustration took over for Tulsa in the third period and killed its chance to rally with undisciplined penalties.

The first period was a physical frame, as both teams made a point of letting the other know that nothing would come easy on this night. Bodies were crashing all over the ice, and tempers flared after the whistle twice in the opening 20.
Each side was given two power plays in the period, but the offenses had nothing to show for it.  The best chance during the special teams portion of the period was a shorthanded breakaway for Deven Sideroff after he blocked a shot and took off the other way, but Rush goalie Tyler Parks tracked the puck as Sideroff pulled it to his backhand and denied the opportunity.  Shots finished level at ten and ten in the frame, but the first intermission arrived with nothing on the scoreboard for either squad.
The middle frame started off much like the opening stanza, with Tulsa getting the majority of the chances and bodies flying into the boards. Just over six minutes in, however, Rapid City struck twice within a minute to open the scoring.
The opening salvo came with 13:39 left in period two, and it was the first with Rapid City, and second career goal for 28 in white, Dane Birks.  The tally came as Birks took a pass from Cedric Montminy at the near point then quickly spun and whipped a shot through bodies and towards the goal. The seeing-eye shot found a lane through traffic and eluded a screened Olle Eriksson Ek to make it 1-0 for the visitors.
Just 41 seconds later, Rapid City struck again to double the advantage.  This time Eriksson Ek was able to drop to the ice to make the initial save on a shot from Tyler Coulter, then make an excellent second save by reaching his glove up while sprawled on the ice to deny Eric Israel’s rebound attempt, but he couldn’t cover the puck before Brennan Saulnier swooped in and lifted a quick top shelf.  It was the first pro goal of Saulnier’s career and sent the Rush to the final frame with a 2-0 edge to protect.
The third period was a disjointed and penalty-filled affair from the get-go, as the Rush began the frame with 1:57 of power-play time carrying over from an Adam Pleskach slashing minor as the second segment came to a close.  The Oilers killed it off, then immediately received a power play of their own but were unable to convert. The teams then traded seven-second power plays on either side of 1:53 of four-on-four play. When all was said and done, the Oilers had slipped to 0-for-6 on the night and 0-for-21 overall with the man advantage in 2019-20.
Oilers head man Rob Murray spoke with The Sin Bin after the game about the power play and what needs to change to find that first tally with the extra man.

“Power play is looking better,” Coach stated.  “We’re getting looks on net, but we don’t have bodies in front.  It’s one of the things that we’ve gotta work on and get better at. Right now we aren’t putting enough traffic in front of the goalie.”

The Oiler offense continued to misfire on good-looking chances, as passes sailed just ahead of or behind their targets and shots went straight into Park’s belly.  Tulsa became more and more visibly frustrated as time ticked away without a breakthrough, which led to a series of events that put to rest any hopes the BOK Center crowd of 4,313 had of a comeback.
It started with a commotion by the benches behind the play, as Sideroff and Josh Elmes squared off along the near boards and their teammates all came to join.  The kerfuffle, it turned out, had been initiated when Sideroff speared Elmes and Elmes naturally responded in anger. Sideroff was given a five-minute major for spearing as well as a game misconduct, while Elmes received two for roughing.  Tulsa made it through the two-minute four-on-four portion, as well as the first minute of Rapid City’s major power play, but then another undisciplined play made things go from bad to much, much worse.
With 1:56 still remaining on the first major, Mike McKee came crashing in on the forecheck after Tulsa had dumped the puck deep and threw an ugly cross-check from behind in the near corner.  McKee rightly received a major for cross-checking, a minor for roughing, and a game misconduct, putting the Oilers two men down for nearly two minutes with no chance of reprieve in case of a goal against. McKee ended his night with a grand total of 26 penalty minutes, as he also had his first fighting major of the season in period one, and added minors for holding and high-sticking as well.
Needless to say, Coach Murray was not thrilled with the lack of discipline his squad showed in the third period, especially the hit by McKee.

“I didn’t think Sideroff’s (penalty) was a spear, I mean from what I saw live,” Murray remarked.  “I’d have to watch it again. Mike McKee’s, just undisciplined. That’s an undisciplined penalty. We did a better job earlier in the game killing penalties, and then obviously the 5-on-3 was, uh, you know, but it’s a 2-0 game and we take those penalties when there’s still time on the clock, ten minutes to go.  It was just undisciplined and it’s unacceptable.”

Rapid City made Tulsa pay in a big way for the unnecessary penalties, cashing in three times during the two-man major power play to ice the game.  Giovanni Fiore got it started with his team-leading third goal of the year at 12:58 of the third, finding twine from the high slot with assists from Peter Quenneville and Israel to give the visitors a three-goal cushion.
Exactly 30 seconds later it was Quenneville’s turn on the business end, as he took sole possession of the team-lead in points with his second goal and sixth point making it 4-0. Israel picked up the primary helper for the third assist of his Rush debut, after being acquired from the Fort Wayne Komets for future considerations in a trade earlier in the day.
The scoring concluded 48 seconds later when Alex Rauter potted his second of the season after deflecting an Elmes shot in tight.  The Rush wouldn’t score again on the power play, but the damage was done and the Oilers suddenly trailed 5-0 with under four minutes to play.  Rapid City finished the game 3-for-7 with the extra man and is now 6-for-13 against Tulsa through two matchups this year.
The only question remaining was whether or not Tulsa could break the goose egg, but Parks wasn’t tested much over the final few minutes and he secured his first career ECHL shutout to move to 2-0-1 on the season.  Parks spoke with The Sin Bin about his first shutout in the ECHL, and was quick to praise his teammates.

“Yeah, it was a good game,” Parks began. “We knew these guys (Tulsa) were gonna be hungry, obviously, losing three straight.  So, we knew we had to come out with a strong start and put pucks to the net, and the guys did a good job blocking shots and killing off some of those crucial penalty kills.”
“The game got a little chippy towards the end, but just had to make sure that you’re just staying in it mentally and moving around a little bit, ”  Parks continued. “But the guys did a great job blocking shots for me and everyone came to play today, so without their help I couldn’t have done much.”

With the loss, Tulsa has now dropped four straight to fall to 1-4-0-0 on the season.  Rapid City, meanwhile, claims its second win over Tulsa in six days to improve to 2-1-1-0 on the campaign.  The visitors from South Dakota continued their success inside the BOK Center, as they are now 15-4-0-0 in Tulsa since the two squads joined the ECHL in 2014-15.  Both the OIlers and Rush know they need to move on from tonight in a hurry, with a rematch between the two clubs looming just over 18 hours after the final horn on Saturday.
Parks talked postgame of his need to put tonight behind him and keep looking forward.

Coach Murray also spoke after the game about regrouping quickly, as well as the need to come out with a renewed passion on Sunday.

“Well, can’t dwell on it I guess,”  Murray commented. “I mean, that’s the best way I can put it, we’ve just got to come out and play better.  We gotta win battles. We’re not winning battles, and all over the ice we’re just getting outworked. Again, it’s unacceptable.  It’s something that we just can’t have happen.”

Faceoff for the Sunday matinee between the Rush and Oilers is set for 4:05 p.m. CT inside the BOK Center.
You can follow along with the action, as you can all season, by following us on Twitter.  Simply follow @SinBinOilers for our Tulsa take, and @SinBinNews for all your AHL, ECHL, and SPHL news and notes.