Penalties a Mixed Bag for Storm 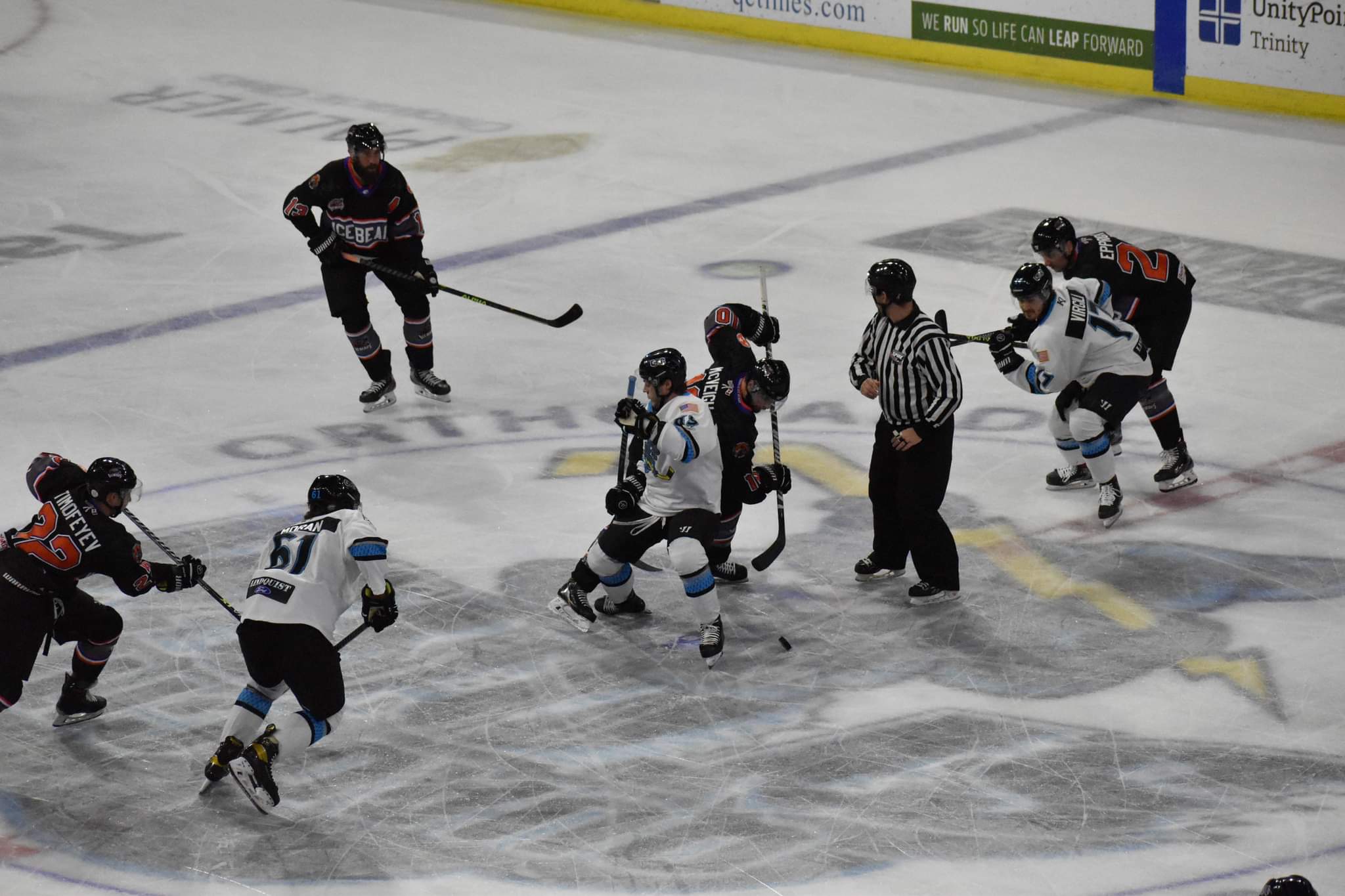 MOLINE, Ill. — The Quad City Storm took two out of six points this weekend, facing off first against the third-place Peoria Rivermen on Friday and then first place Knoxville Ice Bears for Saturday and Sunday’s contests. The Storm spent a lot of time in the penalty boxes over three days, and it came back to haunt them on Sunday.

The Storm spent 78 minutes in the penalty box throughout the weekend, the lion’s share coming on Sunday night. However, twenty of those minutes were game misconducts, one on Friday by Darick Louis-Jean and another on Sunday by Tommy Tsicos. With all the time in the box, it was the perfect time for the opponent to rack up goals, as the Storm’s special teams were outplayed all three days. The Storm definitely had the opportunity to improve on the special teams, as they took 24 penalties on the weekend, but it didn’t happen the way they wanted.

“We were a little disappointed in the power play going 0 for 6,” said assistant coach Jake Toporowski following Friday’s game. “[It] turned out to be the difference in the game, right? If we want to win the next two, this weekend we have to be better on the PP.”

Friday’s game was a close 4-2 loss for the Storm. They scored one power-play goal coming early in the second period. The other power-play goal came on an empty net after a goaltender interference call against Shane Bennett just 21 seconds after Louis-Jean’s major penalty began.

When asked about the keys for the rest of the weekend, Toporowski said Friday,

“Have the urgency we had those last 10, 15 minutes where we needed that third goal to tie. If we have that urgency from the drop of the puck, I think we were in that hockey game and had a good chance of coming out with two points tonight. If we start tomorrow, play how we did those 15 minutes with that urgency, I think we set ourselves up well.”

Saturday’s game was chippy to start out, toeing the line of physicality before a fight broke out between Richie Pinkowski and Kasey Kulczycki in the last minute of the first period. The Storm were a little short-handed for the game, as both Louis-Jean and Tommy Stang served suspensions after Friday’s game for only a single match. The Illinois-based team apparently heard Toporowski’s remarks on Friday, as they came out at 100% from start to finish on Saturday.

“Last night we came out flat, right?” said Coach Dave Pszenyczny following Saturday’s 5-2 win. “We’re the home team, we have a way to establish how the game is gonna go. I think we did a phenomenal job at that. Didn’t really lay off the gas pedal, right? Normally when you go into a third period with a lead, it’s kind of one of those things where you’re just playing to win the game. We really showed we wanted to win a game today. ”

As well as the Storm did on Saturday, winning despite a stream of players heading to the penalty box, Sunday was a complete 180-degree turn. The team came out looking hot, scoring with roughly seven minutes left in the first period, thanks to Kyle Heitzner’s first goal in the SPHL. Heitzner’s goal came just a few seconds after Dillon Fournier exited the box for what would be his first of four penalties, and he returned to the box almost two minutes after the goal.

The second period was rife with penalties; Storm players appeared six times on the sheet while Knoxville only had three. The Ice Bears took full advantage of the long penalties the Storm had taken, a four-minute double minor for high-sticking by Marcus Ortiz and the aforementioned cross-checking major by Tsicos, the main culprits in the special teams display.

Jason Price opened the scoring for Knoxville while his team had a four-on-three opportunity thanks to Ortiz and Fournier being in the sin bin while J.B. Baker was in for the Knoxville team. Six minutes later, Knoxville used a 5-on-3 opportunity to take their first lead of the night and added another tally 35 seconds later while still on the powerplay. While Matt Stoia was serving Tsicos’ five-minute major in the early minutes of the third period, the Ice Bears scored their final goal of the night to bring their power-play conversion rate up to four out of eleven chances. The Storm were zero for three on the power play Sunday afternoon, losing 4-2 just as they had on Friday.

Coach Pszenyczny wasn’t happy with the officiating this weekend.

“[It’s] frustrating when you don’t know where the line is during the game. Guys are hesitating to make plays so you don’t know what’s going to happen as far as that. It’s very infuriating when you’re told by the referee you’re not gonna like the way the calls are gonna be made this period.”

There were penalties during the weekend that looking at replays looked far different than they did on the ice. The goaltender interference penalty against Bennett late in the game Friday came as he ran into Peoria goaltender Eric Levine, who had come out to the right dot to play the puck. Avoidable? Possibly. Worthy of a penalty? I’m not a referee. The hit that was called boarding that led to Louis-Jean’s suspension looked clean upon reviewing it, but can officials use instant replays on the jumbotron to make calls? Fournier’s roughing penalty at 14:51 of the first period came as he retaliated against Brady Fleurent, who had Fournier’s head sandwiched between his shoulder and the boards during a check a second before. This was evident only upon replay. No matter what the first offense is, knocking an opponent to the ice and cross-checking them multiple times in the back of the neck and head like Tsicos did is never called for.

The Storm have another three games in three days next weekend, traveling to Evansville to face the Thunderbolts on Friday before returning home to once more face off against the Rivermen on Saturday and Sunday.