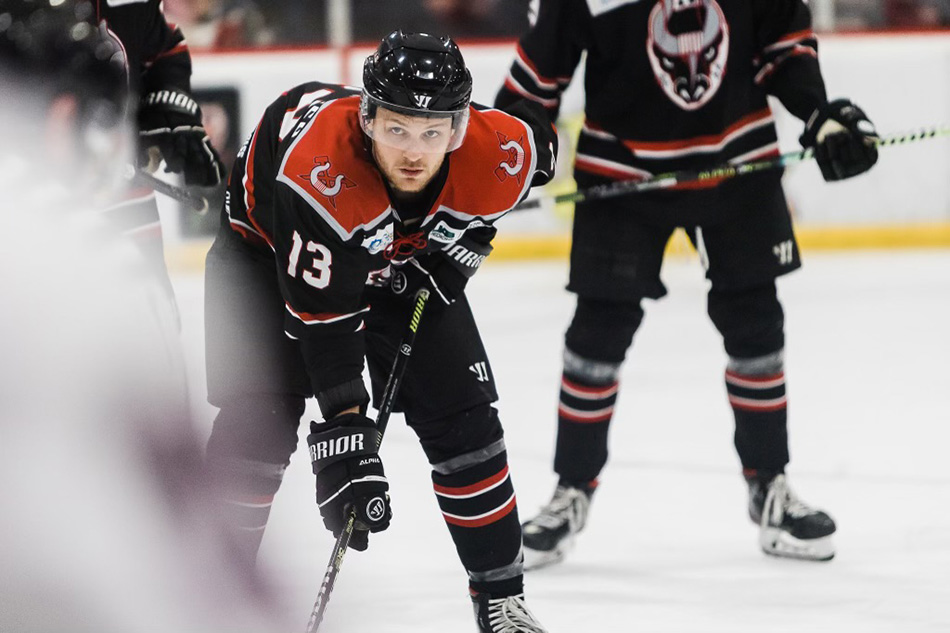 Unfortunately for the Bulls, the result was the same as it had been so many times this season against Knoxville, too many penalties & an ineffective penalty kill

PELHAM, Ala. – Friday night, the Birmingham Bulls were eliminated from playoff contention after a loss in Knoxville to the Ice Bears, along with a victory by the Roanoke Rail Yard Dawgs in Huntsville. So they looked to seek a little revenge on home ice Saturday night against the same Knoxville team. Unfortunately for the Bulls, the result was the same as it had been so many times this season against Knoxville. Birmingham fell by a score of 6-4 in a very physical matchup.

After spending the past three and a half months in the ECHL with the Florida Everblades and Iowa Heartlanders, fan-favorite Russell Jordan returned to the Bulls. His presence was instantly felt. He came out playing physically as well as being a threat on offense. Birmingham went down by a goal early, and it was none other than Jordan who tied things up a short time later. He skated in on the right-wing side and used the Knoxville defender as a screen. He then snapped a wrist shot up and over goaltender Jimmy Poreda. Things were looking good for the Bulls at this point, and thirty-six seconds later, Troy McTavish gave the Bulls their first lead of the game.

Midway through the third period, Jordan made a play using his body in the corners to maintain possession for the Bulls in the offensive zone. Jake Pappalardo then took the puck into the crease, sending a shot in past Poreda, which gave the lead back to the Bulls.

Later in the third period, Jordan and Jared Nash got into it behind the net, a scrum ensued. The linesmen stepped in, but Nash and Jordan didn’t seem to care and continued to throw some punches. The result was both players being given a game misconduct and a two-minute minor for roughing. Jordan was also given an additional two minutes for roughing. Not a bad first night back for Jordan, though. He finished with two points (1 goal, 1 assist) and brought a lot of energy to a team that is now playing the role of spoiler.

TOO MANY COSTLY PENALTIES

The Bulls have maintained their discipline lately and there weren’t as many penalties as there was to start the season. Unfortunately, Saturday’s contest was a glimpse back to the early-season struggles. Birmingham finished the game with 33 penalty minutes, totaling six power-play chances for the Ice Bears. Knoxville wasn’t perfect, though, either. They totaled out at 27 penalty minutes and four power-play opportunities for the Bulls. The problem here is that the Bulls have the second-worst penalty kill unit in the league, while Knoxville has the third-best power-play in the league.

The Ice Bears tied the game up in the second period on the power play due to a roughing call on Sam Stormoen. Colton Fletcher was called for cross-checking after the Bulls took the lead back in the third period off a Pappalardo goal. Stepan Timofeyev and the Ice Bears’ power-play made the Bulls pay. Timofeyev tied things up at four, and it was looking like this one may go into overtime. Later, the additional two minutes for roughing that Jordan received for his altercation with Nash would be the straw that broke the camel’s back. With just twenty-two seconds remaining in the Knoxville power-play, Dean Balsamo took a shot from the right faceoff circle. Brady Fleurent grabbed up the rebound and sent it past Hayden Stewart. This power-play goal was the eventual game-winner, and the Bulls ended the night 3-for-6 on the penalty kill.

Only two weeks remain in the regular season, and next up for the Bulls is three games in three nights. They start the weekend off at home against the Evansville Thunderbolts before traveling to Macon to play a pair of games against the Mayhem. Birmingham has had recent success against Evansville, defeating them twice back in early March, though, Evansville does lead the season series 5-1-1.

Macon, who is having a historically bad season, is doing pretty well against Birmingham, holding a 5-1-1 record against the Bulls this season. That accounts for more than half of the Mayhem’s total wins this year. Despite both teams being out of playoff contention, it’s never a dull moment when they take the ice against each other.