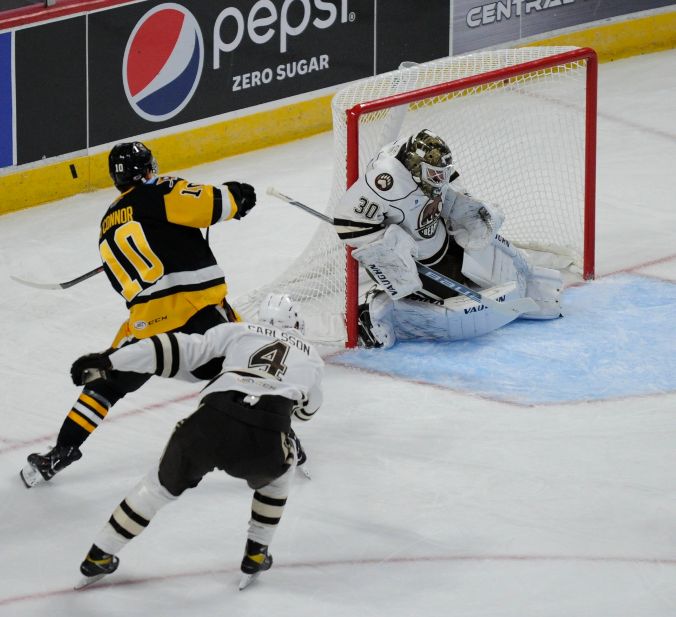 Penguins Down Bears in OT

Penguins Down Bears in OT

HERSHEY, Pa. – The rivalry between the Hershey Bears and the Wilkes-Barre/Scranton Penguins lived up to its billing in the first installment of 12 between the two intra-state rivals as goaltending took center stage. The battle between Hershey’s Hunter Shepard and Wilkes-Barre’s Filip Lindberg sent the game to overtime. After some dueling, the Penguins skated off with the win in the first game as Filip Hallander scored the winner from an extreme angle for a 2-1 decision at Giant Center. The win extends Wilkes-Barre’s win streak to six, while Hershey has lost four in a row despite earning a point in two of those games. Former Hershey captain Matt Moulson was on hand to drop the ceremonial faceoff puck after retiring from the game following the 2021-22 season.

The two teams are nearly mirror images of each other. The Penguins are off to a hot start with their new personnel while the Bears have struggled a bit at putting the pieces together with a new coach and new additions.

To Hershey’s credit, they put together an impressive effort on home ice in this game and got on the board first with Sonny Milano’s second goal of the season, as he called for the puck from Garrett Pilon and rifled it past Lindberg to open the scoring.

However, fresh off of a first star performance in Lehigh Valley a day ago, Corey Andonovski tied the game at one by outdueling Hershey’s defense and sliding the puck past Shepard for the rookie’s third goal of the season.

From there, the goaltenders took control of this game and shut the door on the offense. Of note, Lindberg made a big save at the start of the third period by reaching back and swiping a puck away from Mike Sgarbossa at the goal line, while Shepard withstood three third period power plays for Wilkes-Barre with 11 saves. All told, the teams finished nearly identical in shots and seemed to have equal scoring opportunities.

The highway robbery by the netminders continued into overtime, where Shepard made a huge save on a two-on-one break, while Lindberg made a key save on a similar rush to send his team the other way. Ultimately, the game would end when the Penguins’ Valtteri Puustinen fired a shot off of Shepard, who had come out aggressively to challenge the shot, and the puck fell to Hallander along the goal line unguarded.

An entertaining game featured a goal from Sonny Milano and some amazing saves from Hunter Shepard, but the Pens took this one, 2-1 in OT. Here are tonight's highlights. pic.twitter.com/cliYdaHHvR

“It’s growing pains, definitely,” Bears head coach Todd Nelson said after the game. “Last night we beat ourselves. I felt tonight that we beat ourselves. We got to get to a point where we play solid and of course there’s going to be chances exchanged back and forth, but we have to get to a point where we have to force teams to beat us. That’s the way it’s been for us the last four games. I think the first couple games we got away with it. It’s been addressed, we made some adjustments to our system and it worked well tonight. It was a step in the right direction, and if we score on that two-on-one opportunity, we’re all happy that we got the win, right? But it didn’t work out that way and it was a big point for us. Everyone played hard, it was a game where everyone was sacrificing their body especially on the penalty kill, [Shepard] was great in net, and the guys played the right way.”

Nelson’s assessment of the game is accurate, as the Bears had far fewer quality chances allowed and far fewer mistakes as they did on their recent road swing. The finish on opportunities has not yet happened just yet, and Wilkes-Barre’s quality goaltending tandem will likely be a problem for the remaining 11 matchups between the two teams.

The game has been an early highlight of the season in the Pennsylvania rivalry series, and it’s only just heating up as the two teams meet again next weekend for a home-and-home set for matchups two and three of the season. The Bears will be the only team to play before that set as they cap off the weekend on Sunday with a date with the Lehigh Valley Phantoms at Giant Center.