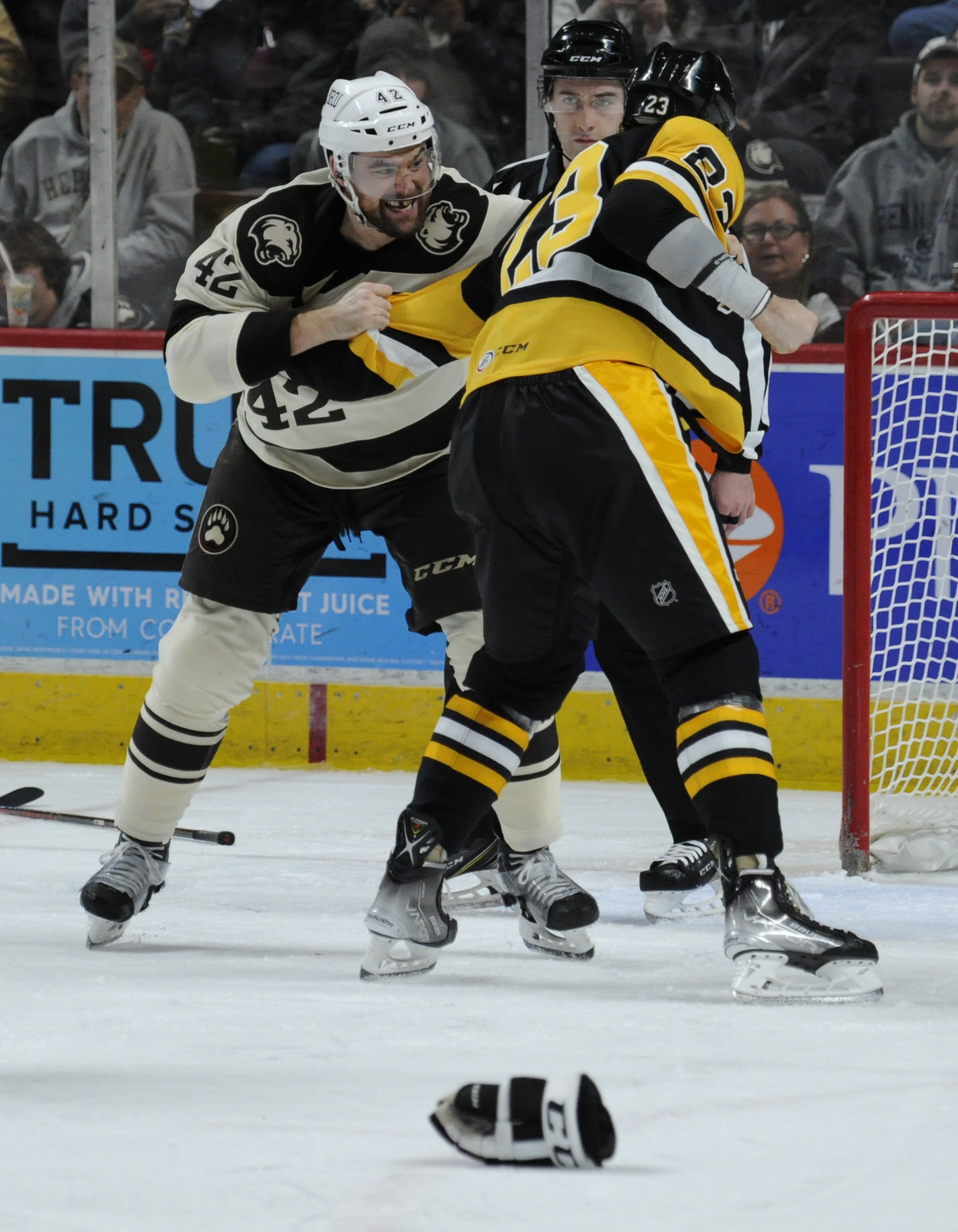 #AHL | On Wednesday, @TheHersheyBears danced with @WBSPenguins for the tenth time already this season. This one would head to overtime where the Bears fell short of the extra point. @FPHBears brings you the recap and reaction

It's always a fight when the Bears and Penguins meet up. Photo via Carl Minieri/Field Pass Hockey.

HERSHEY, Pa. – The Hershey Bears and the Wilkes-Barre/Scranton Penguins met up for the tenth time of twelve this season, and the series that’s never been short on drama or interesting storylines continued that trend on Wednesday as the Bears rallied from a 3-0 deficit inside of the final frame, but Jonathan Gruden scored his second goal of the game half a minute into the extra session to give the visitors a 4-3 win. The Bears’ performance, however, ended up taking center stage as head coach Todd Nelson promised change before the team hits the ice for Friday’s game. Taylor Gauthier got the win with 20 saves while Hunter Shepard took the loss in goal with 22 stops.

It was an atypical performance for the Bears, who had a beefed-up roster that forced a plethora of regulars to the sidelines as healthy scratches with the cherry on top being the addition of Joe Snively, who put on a Hershey jersey for the first time in the regular season in nearly a full calendar year. The Bears, unfortunately, fell flat out of the gate, where the players fought the bouncing puck and seemed a step slower than their opponents in this game as they allowed three goals in the first two periods.

The most egregious of those goals was the third in which Wilkes-Barre scored a shorthanded goal on Hershey’s all-forward top power play unit with Gruden able to find Raivis Ansons moving faster than the Bears in transition for his first American Hockey League goal.

The Bears rallied with three goals in the third period, but Wilkes-Barre/Scranton earned the overtime win by a 4-3 score tonight. Here are the highlights. pic.twitter.com/PwAIEDU0cv

“I thought that was one of our worst games of the year, to be honest,” Nelson said after the game. “If you don’t want to work, you’re not going to win games. We got outworked tonight. Wilkes-Barre deserved the game, they outworked us, simple as that.”

“Anytime you infuse five or six new bodies into your lineup, it’s not their fault, it’s just the way it is, it breaks the chemistry and now we have to find new chemistry. That’s where we’re at right now.”

The Bears do have some positives to take away from the game, namely that they pushed back in the third period to tie the game and send it to extra time. Mike Sgarbossa, playing in his 500th career AHL game, struck for a power play goal in the third to build some momentum, and Vincent Iorio tallied his second goal in the AHL on a nifty move to cut the lead to one.

Hershey was able to do something they haven’t done much, nor have they needed to all that often when Sgarbossa struck for his second of the game and 13th of the season with just 25 seconds to play to even the score at three. Unfortunately, one point is all that the Bears would get as Gruden buried a nice pass on a turnover to end it with his tenth of the campaign. Nelson vowed change ahead of Hershey’s next game as the team hits the ice for practice on Thursday.

“We didn’t have as many [chances] as we normally do, not even close. Tells me we weren’t willing to penetrate the side. They did a great job blocking shots, they were more committed than we were.”

“We’re going to have practice tomorrow, 11:00,” Nelson said. “Might shake up the lines and some guys might be surprised what color jersey they’re wearing tomorrow and maybe wake them up a bit.”

Nelson referred to Hershey’s practice jersey colors, which typically indicate line combinations. In a standard practice, players who have been scratches for games don dark green uniforms at practice while the other colors correspond to a particular line. It adds another layer of intrigue ahead of Friday’s game with the Springfield Thunderbirds, where the Bears look to break a little skid of three losses in their last four games.

The two interstate rivals won’t see each other again until they rematch at Giant Center to kick off the month of March. Four of the ten meetings this season have gone beyond regulation, with each team winning twice. Each team has five wins in the season series to this point, and both teams have gotten wins with three different goaltenders with Gauthier being the sixth to earn a win in this one.