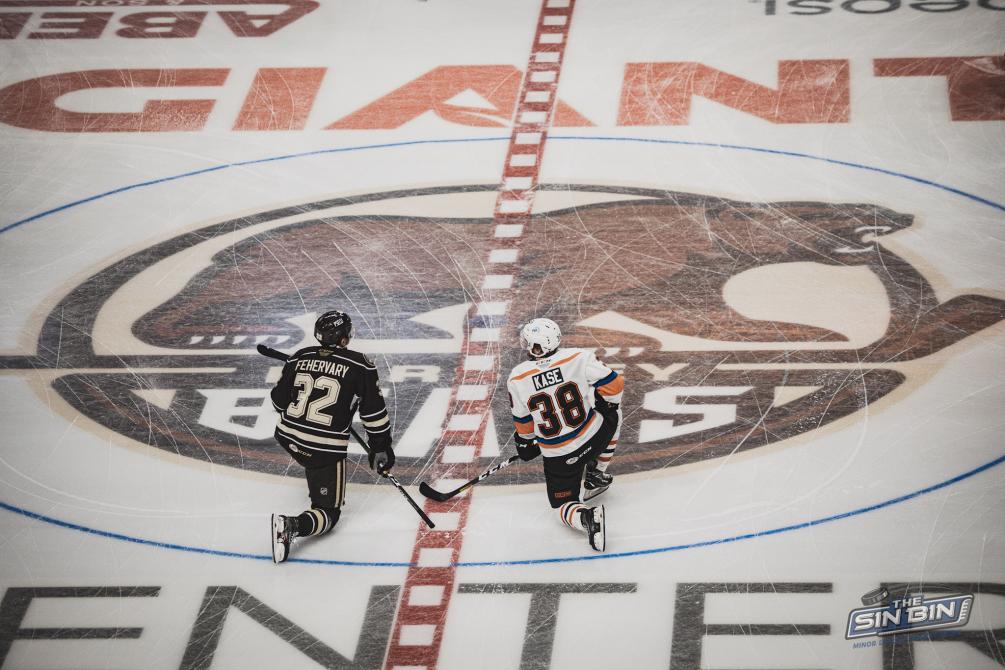 HERSHEY, Penn. –  It was a span of 334 days and then some, but Hershey Bears hockey finally returned on Saturday afternoon for a contest with the Lehigh Valley Phantoms at the Giant Center. The game originally was to be the second contest of the new season, but issues with Hershey’s first opponent in the Binghamton Devils caused Friday’s game to be rescheduled. Both teams were working to get going with the new season, but the Phantoms scored with 44 seconds left to force overtime and eventually prevailed in the extra session by a 2-1 final score.

Although scoring was low, there was no shortage of action for limited fans at the Giant Center to enjoy. The Bears scored the first goal just over halfway through the second period when Kody Clark drove the net and chipped an excellent feed from Eddie Wittchow past new Phantom goaltender Zane McIntyre to give Hershey the 1-0 lead.

Kody Clark breaks the deadlock! It’s the first goal of the season for the Hershey Bears! pic.twitter.com/eBbJfqyi4h

Hershey was looking to take the one goal advantage to the bank as the game edged to the closing moments, but Lehigh Valley had other ideas. The Phantoms won a faceoff in the Bears’ zone and Wyatte Wylie ripped a shot through some traffic that eluded Pheonix Copley to knot the score at one and send the game into overtime. The goal was Wylie’s first in the AHL, as the fifth round choice of the Philadelphia Flyers in 2018 made an early impact by getting a huge goal for the Phantoms.

The action in three-on-three overtime was exceptional as expected, but the Phantoms completed the comeback at 1:59 of the extra session as Ryan Fitzgerald fired a shot high past Copley to end the game. Lehigh Valley took the win despite a 38-30 shot advantage for the Bears in the game, and neither team was able to capitalize on any special teams chances. Lehigh Valley came up empty on five power play opportunities while Hershey missed on three chances.

We waited a long time for the puck to drop, but unfortunately we didn’t get the result we wanted. Here are the S&T Bank highlights from this afternoon’s game. #HBH pic.twitter.com/UzUEuWgokl

Bears head coach Spencer Carbery liked the effort from both teams after such a long period of time away from game action.

“There was less (rust) than I thought, if that makes any sense,” Carbery said in a postgame Zoom interview. “I thought both teams had a highly competitive game with good looks both ways. If there was one area of rust, special teams might have generated more zone time in a normal situation, but credit that to the penalty kill and overall there was less rust than anticipated given the layoff.”

Copley made 28 saves on 30 shots in the loss, and McIntyre made 37 saves on 38 shots for the game. For a long layoff, both teams seemed to find their game and their identities early on. Hershey controlled offensive zone play for significant portions of the second and third period, leading to the shot advantage of 15-8 and 15-10 respectively, but finding that finish is going to be the key for them going forward. McIntyre has played like a brick wall in the past against the Bears in different organizations, and beating him will be a big challenge when the two teams meet many more times this season.

Among other noteworthy performances, the game saw two players drop the mitts for a fight in the first game as Kale Kessy dropped the gloves with defender-turned-forward Sam Morin, who was recently assigned to the Phantoms after seeing some action with the Flyers this season. Both players threw some punches, and it seemed as though both players were getting back into the rhythm of action in the tilt.

Morin and Kessy engage in the first fight of the season in Hershey! pic.twitter.com/LJ6izaNwgn

The Bears will play their next game on Thursday, Feb. 11 when they travel to Wilkes-Barre for their first matchup against the Penguins in a 5:00 PM puck drop.