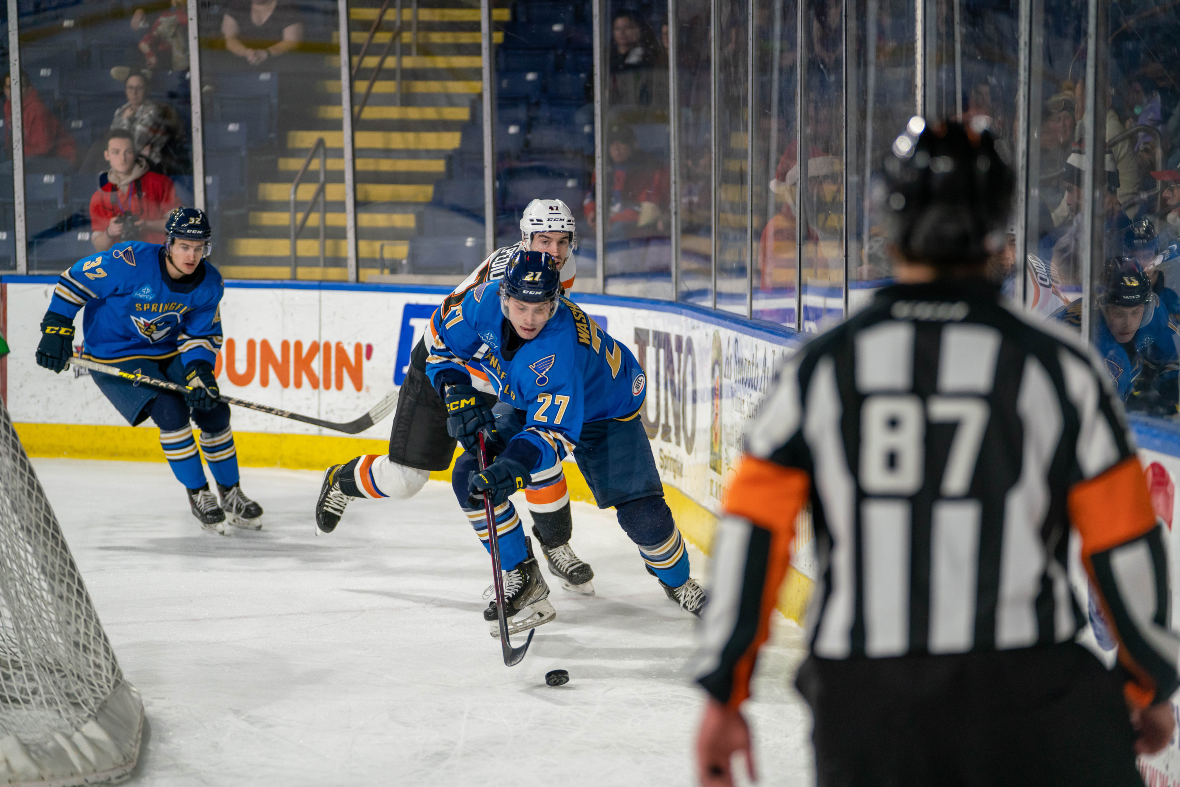 SPRINGFIELD, Mass. – The Springfield Thunderbirds and the Lehigh Valley Phantoms finished out their pre-Christmas schedules at MassMutual Center in Springfield on Friday night. With a crowd of 5,311 on hand to take in the last game before the holiday break, the winner would leave with the sixth and final playoff spot in their stockings as a nice early present. In this game, Lehigh Valley’s veteran forwards tallied two important goals, while Pat Nagle made 30 saves to keep his team on the nice list with a 2-1 decision on enemy ice. Vadim Zherenko suffered the loss with 21 stops as the T-Birds missed out on important points.

It was a night for the Phantoms’ top veteran players to make their big contributions, and a familiar face to the score sheet kept the Phantoms rolling, with Artem Anisimov’s tenth goal of the season only 23 seconds into the game to put the visitors in front. It’s Anisimov’s third straight game with a goal, and the veteran forward has tallied all ten of those goals in his last nine games played. Both goaltenders were tested in the opening stanza, with both sides racking up a dozen shots on goal each.

Neither team would light the lamp in the second period, with the Phantoms killing off three minor penalties over the course of the frame. Springfield would ultimately miss out on all four man-advantage opportunities in the game, as their power-play continues to struggle.

In the third period, the Phantoms would double their lead with Cal O’Reilly’s third goal of the season, snapping an eight-game pointless streak for the team’s captain. O’Reilly hasn’t quite been at the pace he was a season ago, his best since joining the Phantoms, but he’s a key veteran contributor who ultimately tallied the game-winning goal in this one.

Springfield would cut the lead to one with Mitchell Hoelscher’s second goal of the season and second in as many games. Hoelscher drove to the net and buried a loose puck on the back door to cut the Lehigh Valley lead to just one goal. The tally helped lift the crowd’s holiday spirit a bit and get the Thunderbirds’ sleigh back in the air. His lamplighter comes one day after scoring his first American Hockey League goal against the Hartford Wolf Pack.

The Thunderbirds would mount a late push, but Nagle was strong in net, making several big saves and preserving the 2-1 win for the visitors.

The two points are important for the Phantoms, who moved to 29 on the season and are within one point of idle Wilkes-Barre/Scranton for fifth place at the Christmas break. The Atlantic Division standings board got a lot closer Friday night; with a win by the Hartford Wolf Pack, spots four through eight in the division are separated by only six points, and no team is truly out of contention in the Atlantic.

The Phantoms resume play Wednesday night, when they host the Bridgeport Islanders. Meanwhile, the defending Eastern Conference champions get back to game action the same night, hosting the Hartford Wolf Pack, in a pair of important games for these division standings.