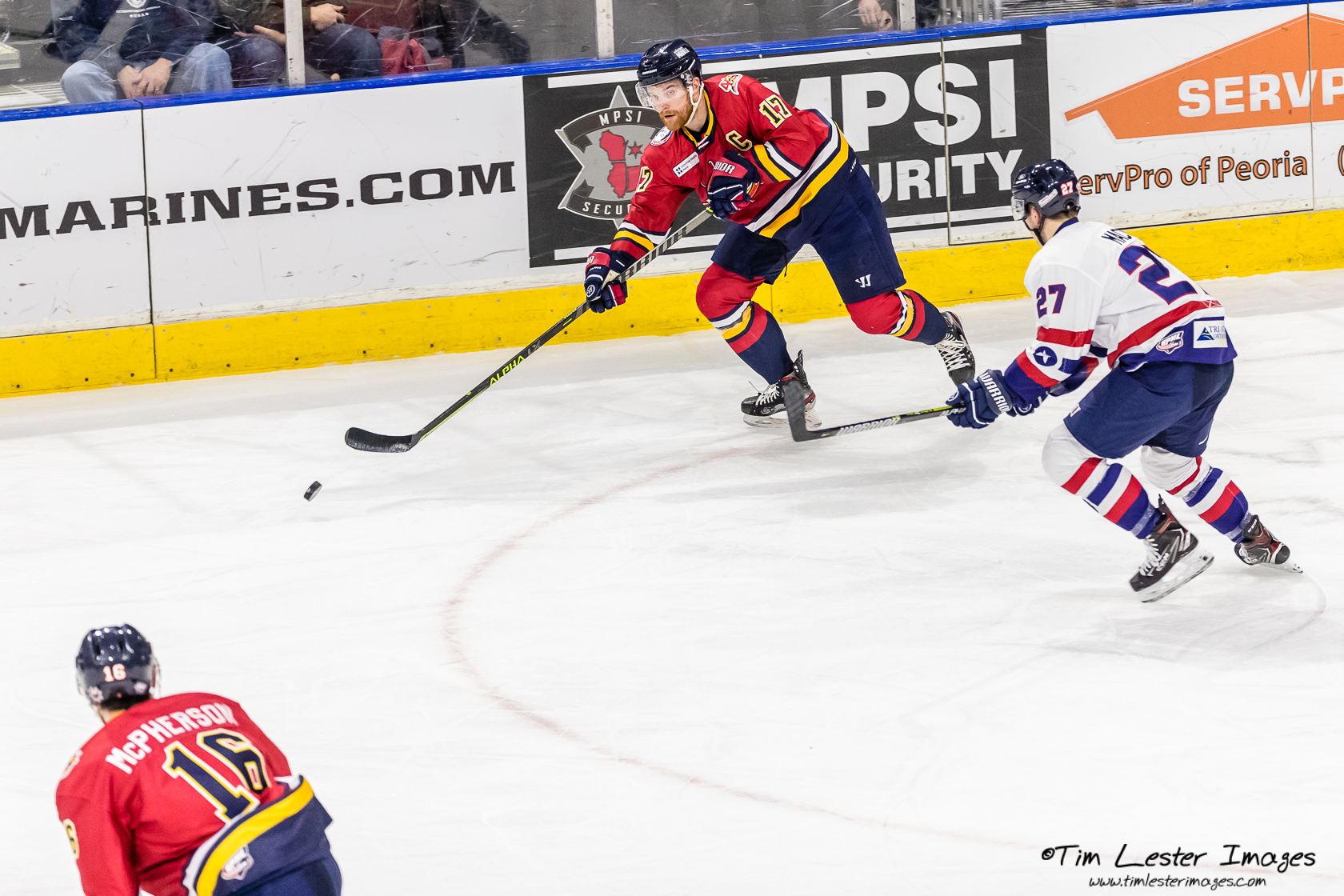 In the third game in three nights between the Peoria Rivermen and Evansville Thunderbolts, the Rivermen were looking to refocus after a Thunderbolts beating the night before.

PEORIA, Ill. – The Peoria Rivermen were looking to refocus after a Evansville Thunderbolts beating the night before at the Peoria Civic Center. This would mark the third game in three nights between the Rivermen and Thunderbolts, with each team earning a win in their opponents barn. Both head coaches put their game two goalies in net, each hoping the choice would be the correct one.

The Rivermen players appeared to receive the message from Head Coach Jean Guy Trudel with a much stronger start to the game. So well that J.M. Piotrowski put the Rivermen on the scoreboard 1:42 into the first period, followed by first SPHL goals each by Dale Deon and Francesco Corona over 1:40 minutes of game time. Thunderbolts outshot the Rivermen 14-8 in the period and Hayden Hulton was able to get Evansville on the scoresheet at the 17:08 mark.

Period two was similar to the first period, with the Rivermen scoring three and Thunderbolts one, which ended the second period with Peoria up 6 to 2. This would ultimately be the final score as neither team scored in the final period. The first period appeared the referee was letting the teams play with only two infractions, offsetting roughing calls – the second period showed the emotions boiling over. Starting at 4:21 of the second and ending 50 seconds later there were a total of eight penalties called, three of those being majors. The infractions started with a slash by Thunderbolts Cameron Cook on Rivermen forward Cody Dion; Dion took matters into his hands and received Cross-Checking Major and a Game Misconduct for his retaliation. Less than a minute later, after a save by Thunderbolts goalie Brian Billett, pushing and shoving started in front of the net which turned into a bout between Evansville center Mike Ferraro and Peoria defenseman Zach Wilkie.

Peoria forward Marcel Godbout had a great game with two goals and 2 helpers, while forward Francesco Corona added one goal and three assists. While both were positive’s for the team who performed poorly the night before, Rivermen captain Alec Hagaman added his name to the history books with two assists on the evening and reached 300 points in SPHL games. The total includes points obtained while he played for Pensacola Ice Flyers in the 2020-2021 season.