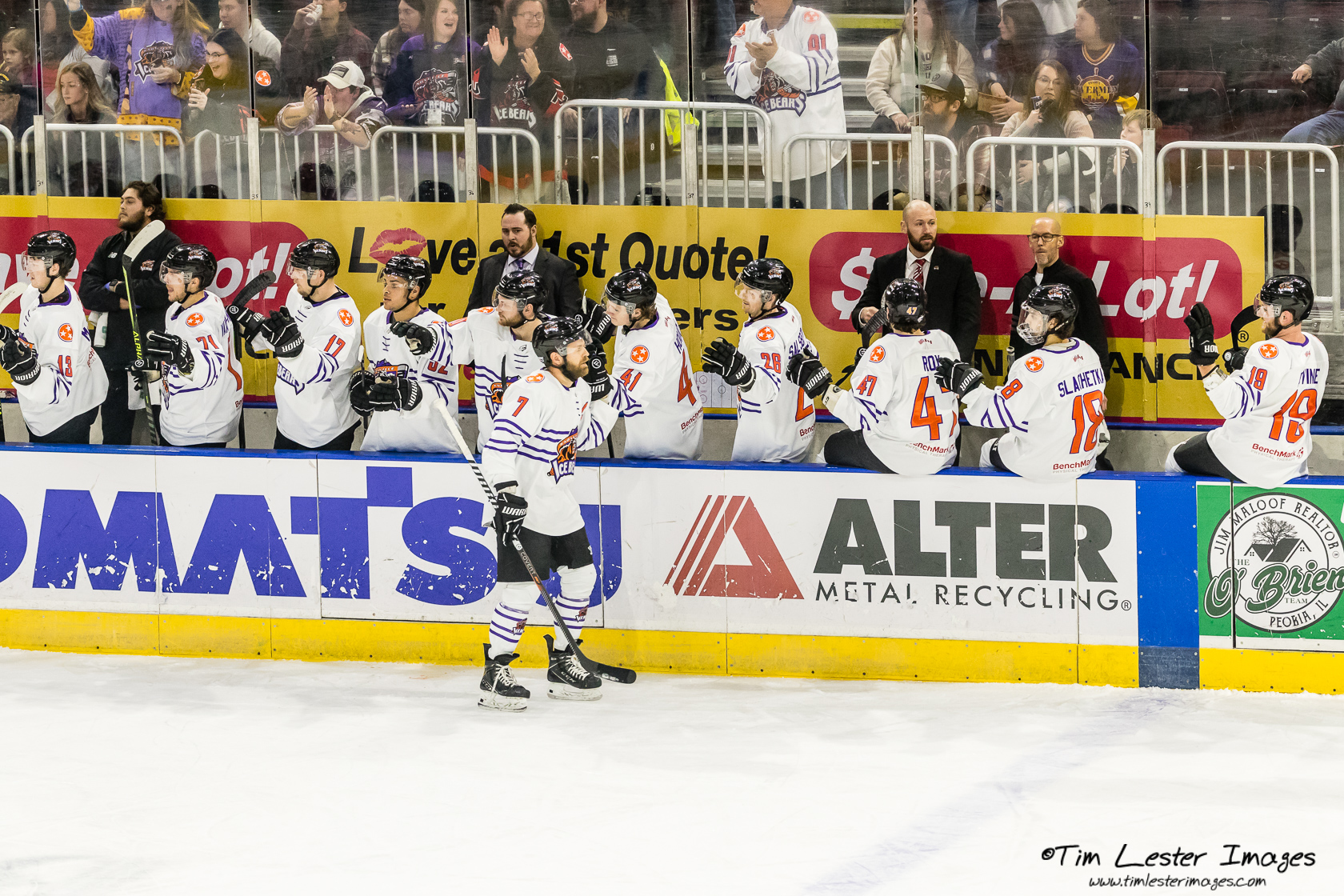 #SPHLPHOTOS | Friday night, the @Peoria_Rivermen welcomed the @icebears for a three-game weekend.
FPH Photographer Tim Lester was there for all the action!

PEORIA, Ill – The Peoria Rivermen welcomed the Knoxville Ice Bears to Carver Arena in the Peoria Civic Center for a three-game weekend. One would expect the penalty box to be busy, as both teams are in the top five in PIM for the league. The Ice Bears wanted to prove they are a top contender and were quick to silence the 2604 fans in attendance, plus keep them quiet. After three periods, the Rivermen offense could not produce enough, and the home team lost 6-4.

The big news earlier in the day was the return of a familiar face joining the Peoria roster for the weekend, Ben Oskroba; the former defenseman retired after the 2019-2020 season. Oskroba wanted to have his six-month-old child see his daddy play in a professional hockey game. In Ben’s words, “He will never remember this weekend, but I will, and we will have the pictures.” When Oskroba arrived at the Peoria Civic Center, Rivermen staff informed him this Friday, the 13th game, would be his 300 SPHL game, all for the Peoria Rivermen. There are no plans to play beyond this weekend, it was a chance to fulfill a dream, and his Peoria team granted him his wish.

The Rivermen controlled the game from the initial puck drop and for the majority of the opening period; it appeared the Rivermen defensive zone play expected strong play from their starting goalie Ben Churchfield who saw two shots in the opening 6:16 but unfortunately for the home team, both were goals. Churchfield was quickly replaced with Eric Levine, which did not work out initially as the next two shots faced, one found the back of the net. At the 10:32 mark of period one, the visitors had three goals on four shots, not an impressive start for the second-place team in the SPHL standings. Maybe a slight consolation, two of the three were scored by the SPHL goal leader Justin MacDonald – the second goal being his 17th goal of the season. Peoria was able to get on the scoresheet less than two minutes later when forward Cayden Cahill one-timed a shot from the left circle past Ice Bears goaltender Bailey MacBurnie to cut the deficit by one.

The second and third periods were mirror images, with Peoria earning the first and third goal in the second period, sandwiched by a Knoxville goal. In the final frame, the Ice Bears got the first and third goal of the period while Peoria tallied the second. The handful of Knoxville fans who made the drive was treated when forward Dean Balsamo provided a gift to MacDonald with a pass for an empty-net goal and a hat trick on the evening. A couple of Ice Bear fans were able to send their caps to the ice for the celebration.

In the game, Peoria Rivermen outshot the Ice Bears 41-28 but doubled the visitor’s time in the box, and Knoxville was able to score on two of their four power plays. The penalty box was reasonably quiet from the visitors and home team, but it seemed like any minute, there was going to be a line brawl. What will round two of the weekend hold?

Tim Lester is Field Pass Hockey’s Peoria Rivermen and Quad City Storm photographer and will bring you closer to the action with his images from both teams all season long.