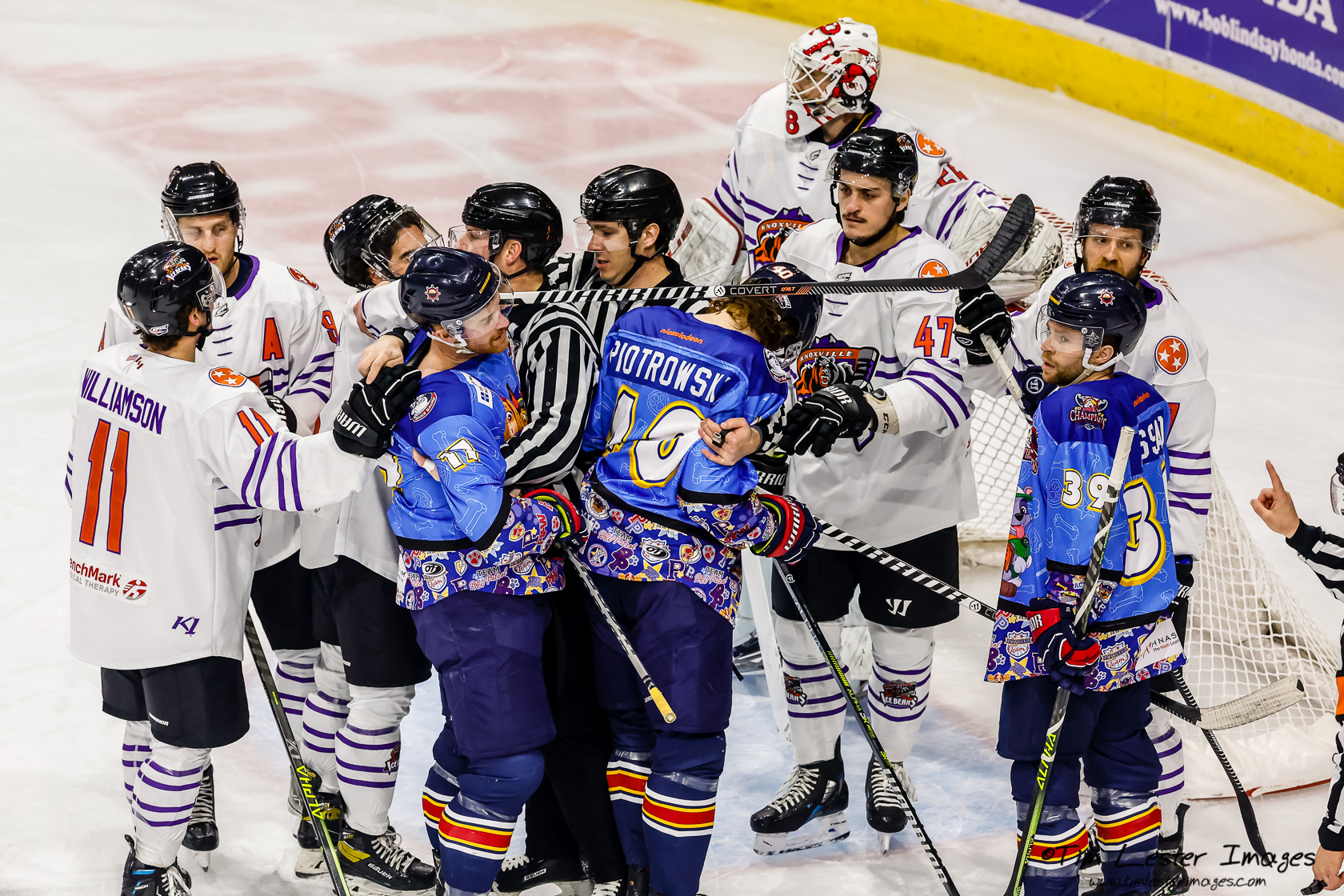 #SPHLPHOTOS | On Saturday evening, the @Peoria_Rivermen held their Paw Patrol night, against the @icebears.
PH Photographer Tim Lester was there for all the action!

PEORIA, Ill – On Saturday evening, the Peoria Rivermen and Knoxville Ice Bears continued their three-game set at Carver Arena in the Peoria Civic Center.
The evening was a special promotion night for the Rivermen, Paw Patrol night, with the fans and their young ones filling the stands, with a little over 4000 in attendance. The hometown faithful were wondering which team would show up on this evening since the previous night’s loss and poor play would surely motivate the players to perform better. The goalie play was similar to the night before, but with the play reversed between the teams, the Rivermen offense produced on this night, and the home team got a 5-2 victory.

The first period produced little action, no penalties called, and the lone goal by Peoria defenseman Dale Deon, his second of the season. The middle frame jump-started the home crowd when Rivermen Captain Alec Hagaman took the puck off the opening faceoff and scored unassisted eleven seconds into the period. One-hundred and fifty seconds later, Peoria forward Joseph Drapluk found the back of the net and chased out Knoxville goalie Alec Calvaruso out of the game after giving up three goals on ten shots; in came the previous night’s winner Bailey MacBurnie for the visitors. Ice Bear goal tenders had a similar night of play like the Peoria goal tenders the previous evening but not as poorly as the home squad. Over three minutes later, Ice Bear forward and SPHL goal-scoring leader Justin MacDonald continued his goal tallies with his 19th of the season and, more importantly, getting Knoxville on the scoreboard. For nearly 15 minutes of game time, neither team found the back of the net. Shortly before the six-minute mark of the third period, Knoxville forward Cameron Hough started the scoring, his 7th of his rookie SPHL season, putting the visitors one goal behind. A couple of minutes later, one of those obscure rulebook penalties was called when Justin MacDonald came upon a Rivermen player stick laying on the ice; he flipped the stick over the boards into the stands using his stick, which earned him a 10-minute misconduct penalty it was more costly. Since the referee did not see this infraction, it was seen by one of the linesmen, who are generally not allowed to call penalties, but once play was stopped for an apparent goal by Knoxville, the officials huddled and discussed the previous minute of play. The goal was waved off, and MacDonald was sent to the box. Nearly 10 minutes before the puck would contact the back of the net again, this time Peoria forward Jordan Ernst splitting the Knoxville defense and putting a backhand into the net. Peoria would add another goal with nine seconds left in the game when defenseman Zach Wilkie joined the offensive rush and buried a rebound in front of the net.