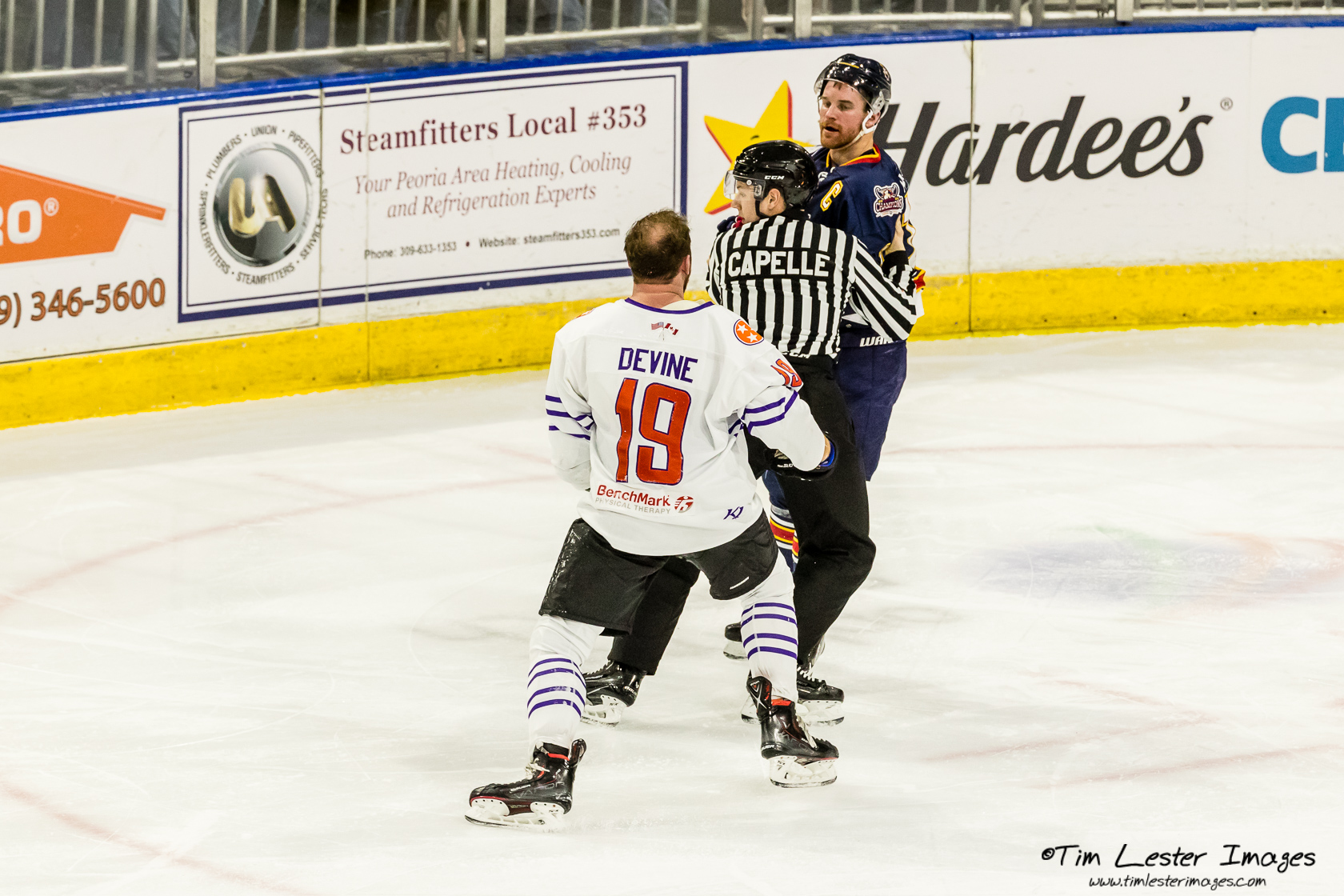 #SPHLPHOTOS | On Sunday afternoon, the @Peoria_Rivermen and @icebears competed in their final game of the weekend.
FPH Photographer Tim Lester was there for all the action!

PEORIA, Ill – On Sunday afternoon, the Peoria Rivermen and Knoxville Ice Bears competed in their final weekend game. Both teams started with what appeared to be hesitant play and looking to instigate a fight, but the game officials controlled both sides for the first period, and that would change in the second and third periods. While the Ice Bears opened the scoring, the home team would excite the 2778 in attendance before their postgame skate. The Rivermen offense produced for the second game in a row, this time getting a 6-2 victory.

The Knoxville team was able to jump out to a two-goal lead over an eleven-minute span across the first intermission, forward Cameron Hough with his 8th goal of the season and SPHL goal-scoring leader Justin MacDonald earning his 20th of the season. Just a little before MacDonald continued his goal-scoring streak against the home team, Ice Bears Ryan Devine , and Rivermen Captain Alec Hagaman were each assessed 14 minutes of penalties apiece, with two roughings and one Continuing Altercation Misconducts each, which kept both players off the ice until the final minutes of the second period. While the Rivermen Captain was sitting in the box, his teammates were able to tie the game with two goals on their own. After 14 penalties were called on both teams in the second period, the third was slightly calmer for called infractions but not the scoring by the home team. Rivermen forward Jordan Ernst earned a natural hat trick when a player scores the next three goals in a game. In between the scoring frenzy by Ernst, the Knoxville squad let the officials know their feelings about everything, and over a short minute of game clock time, the visitors earned not one but three penalties related to their treatment of the officials.

The Rivermen outshot the Ice Bears 40 to 26, but for the first time over the weekend set, both coaches still needed to change a goalie during the game. Peoria was called for nine infractions for a total of 26 minutes, while Knoxville was called for 14 infractions and 60 minutes – the Ice Bears going zero for four on the Power Play while Peoria was four of nine. The SPHL officiating staff will appreciate these two teams will only face each other for part of the regular season.

While the come-from-behind win for the home team was important, after the final horn sounded, the team and fans turned their attention to Ben Oskroba – while Oskroba did not have a point on the afternoon and a -2 plus/minus; he was named the No. 1 star of the game. This would be his final professional hockey game, and his teammates showed their appreciation for his dedication to the team over the years, a few tears might have been shed, but there are no photos, so did they really occur? Hockey teams and players have great respect for the game and their own. Best of luck, Ben!

Tim Lester is Field Pass Hockey’s Peoria Rivermen and Quad City Storm photographer and will bring you closer to the action with his images from both teams all season long.