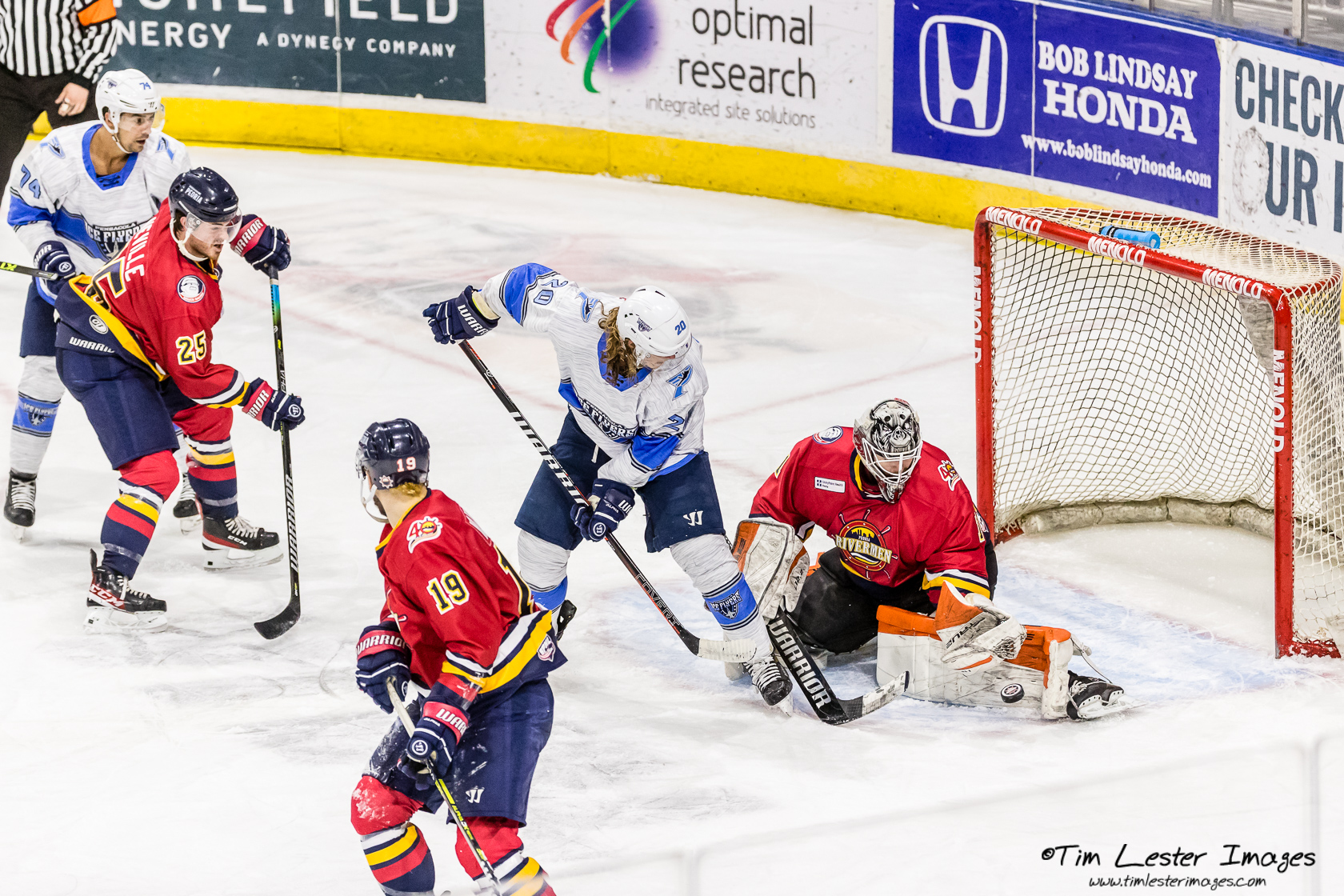 Friday night the Pensacola Ice Flyers and Peoria Rivermen faced off in Game Two of their SPHL President’s Cup playoffs.

PEORIA, Ill. – Two nights ago the Pensacola Ice Flyers and Peoria Rivermen played their first round SPHL President’s Cup game in a neutral location since Pensacola’s rink was not available. Peoria was able to capture the win that evening 6-3 over the previous season championship winner. Ironically, there are more players on the Rivermen roster that helped win the title for Pensacola than remain on the Ice Flyers roster from last year. With the playoff series being a best of three, the Ice Flyers needed to play strong to avoid elimination, would they be able to do this on Peoria’s home ice?

The Peoria fans received something to cheer for real quick, 0:22 seconds after the initial puck drop to be exact, when Rivermen forward Alec Baer found the back of the Pensacola net off a rebound in front. A few minutes later, Baer was able to get his second goal of the game to provide a 2-0 lead in under five minutes into the first period. Unlike two nights ago, Ice Flyer head coach Rod Aldoff did not change goalies after a two goal deficit to the Rivermen. A few seconds later Peoria defenseman Zach Wilkie was called for tripping and the Ice Flyers capitalized on the opportunity of the Power Play, both teams were leaders in special teams play during the regular season and this is amplified during the playoffs. Pensacola Captain Brennan Blaszczak was able to score the first goal for the Ice Flyers and first special teams goal of the evening. With less than three minutes left in the period, Blaszczak was able to find the net once again to tie the game. What started strong for the Rivermen turned into a new game once the period ended.

The second period started with a penalty on the opening face-off when Ice Flyers Cory Dennis was called for interference. Peoria was unable to take advantage of the man advantage. Overall the middle frame had more defense battles and solid play by both goalies. The fans were not happy with the officiating crew as they appeared to miss calls or make calls that appeared to be incorrect.  Tthe emotional change appeared to be near the 14 minute mark when Rivermen’s Lordanthony Grissom was called for interference along the boards at center ice while the Ice Flyer player had the puck. With less than one minute left in the period, the Ice Flyers were on the Power Play again and Frederic Letourneau was able to get the puck past Rivermen goalie Eric Levine.

While the Power Play was not strong for either team in the earlier periods, the third period would be a different story with three of the five goals scored being on the Power Play. The first being scored by Ice Flyers forward Ivan Bondarenko just past the four minute mark. The once vocal crowd suddenly became quiet with the home team down two goals. Peoria head coach Jean-Guy Trudel pulled Levine in favor of Jack Berry. Their spirits were lifted less than a minute later when Alec Baer was able to earn a hat trick, the only even strength goal of the period. Energy in the arena from the 1709 fans went off the charts when Rivermen forward JM Piotrowski tied the game after getting the puck past Pensacola goalie Cody Karpinski on the short side after a battle around the net. The next few minutes felt like overtime was going to be needed but after Peoria was called for Too Many Men; Ice Flyer forward Rex Moe was able to onetime a puck past Berry on the power play for the ultimate game winner. Peoria played strong and with about two minutes remaining Trudel pulled their goalie for the man advantage. Opportunities existed but the home team was unable to find the back of the net. With the goalie pulled, Pensacola’s Blaszczak was able to get a hat trick with an empty net goal, in the 6-4 victory. This series will require game three with the winner moving on to the semi-final round and loser going home for the summer.