The Peoria Rivermen and Pensacola Ice Flyers faced off Saturday night in a playoff elimination game. 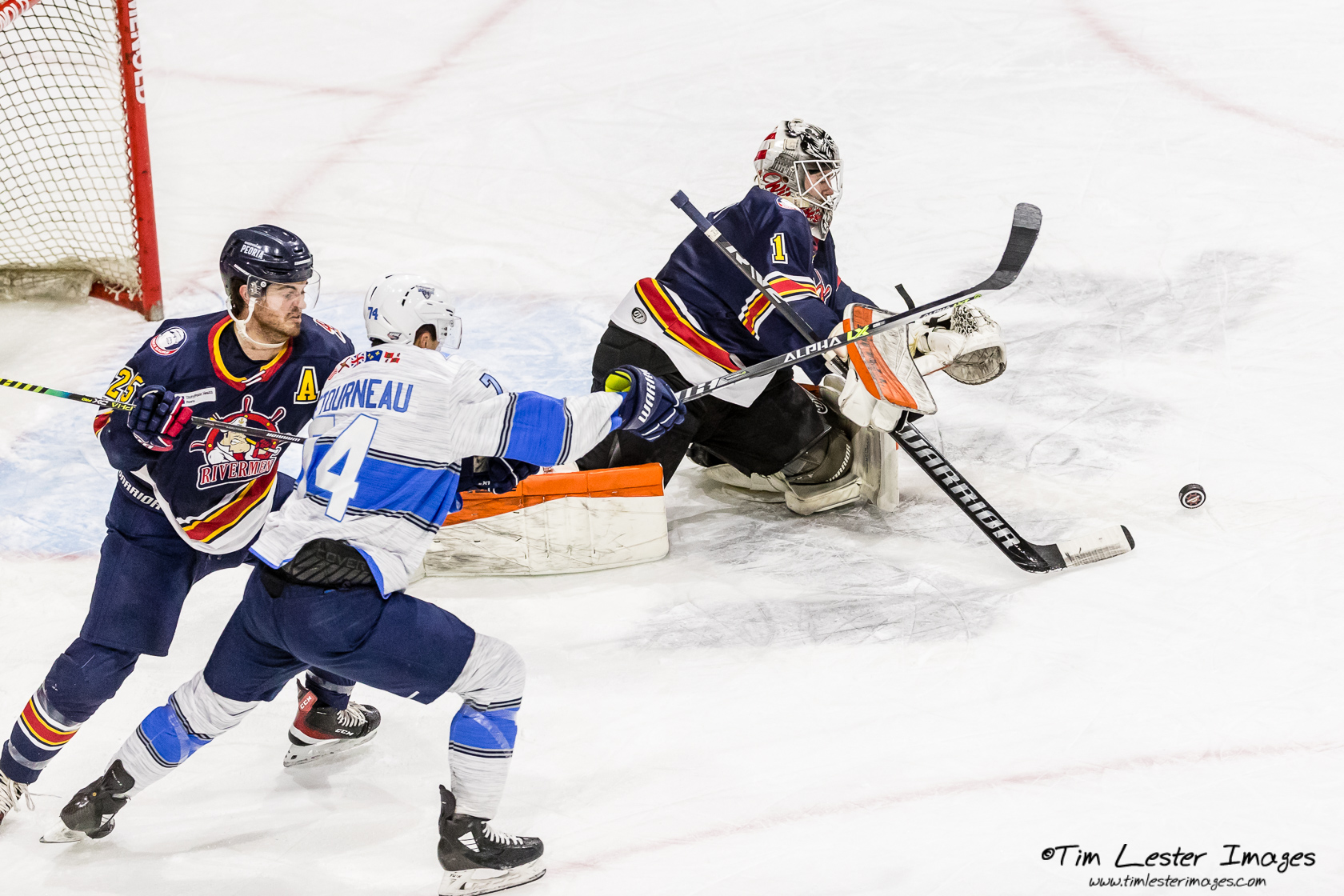 PEORIA, Ill. – The pressure of an elimination game is not easy in any sport, the Peoria Rivermen and Pensacola Ice Flyers were going to have to face it on Saturday night at the Peoria Civic Center arena. Question would be which team would be better on special teams and avoid giving their opponent the man advantage. With the series tied at one game each, winner would continue to round two in the President’s Cup playoffs, so the season would be on the line. On the Peoria side, the players had a certain focus that was not common over the past few months, the pressure of the day most likely part of their pre-game talk. Both teams went with the goalie who finished the night before, Peoria with Jack Berry and Pensacola with Cody Parpinski.

Both teams started a little cautious feeling out the other team with little physical contact normally expected in a playoff game. First mark on the score sheet was shortly after the five minute mark when Peoria defenseman Dale Deon pinched in the Pensacola zone and threw the puck on net and went over the shoulder of the Ice Flyer goalie. The first playoff goal for Deon and energized the crowd of 1289 for the home team. A short time later, Pensacola’s Malik Johnson was called for tripping and providing the Rivermen the first man advantage but the home team was not able to capitalize. Rivermen were next to head to the box and Ice Flyer’s Frederic Letourneau was able to put a one-timer past the Rivermen net minder. As the period progressed the physical play picked up and ultimately Austin Redders and Kasey Kulczcki dropped the gloves long enough to add additional energy to their teams. With four minutes remaining in the period, Pensacola defenseman Cory Dennis was charged with Hooking and Peoria did not want to let this opportunity slip like the two earlier power plays. Peoria captain Alec Hagaman found a loose puck off a rebound and made sure to take advantage of the chance. Momentum shifting to the home team heading into the locker room when the first period expired.

Period number two was spent with both teams moving the puck up the ice and putting shots on their opponents goal tender, nothing finding the net. The home crowd was on the officiating crew once again, similar to the previous nights game, for what the fans thought were incorrect calls. If the fans and home team needed more energy, one minute after Peoria forward Jordan Ernst was called for slashing, defenseman Nick Neville was called for holding on the Pensacola power play. This would provide the visitors a one minute two man advantage and with their strong special team play, it was only a matter of time before they would score. That is why the game is played, as the Rivermen were able to defend and not allow a goal – a boost for Peoria while a little defeating for the Ice Flyers. With less than one minute left in the second frame, Rivermen’s Austin Wisley delayed in the Pensacola zone with the puck while his team mates were making a line change; Wisely decided to turn and put a shot on net and to everyone’s surprise, the puck slowly trickled into the net. The shot went below the blocker on the short side and appeared to catch the jersey of Parpinski but not enough to stop the pucks motion.

Peoria was up 3-1 to start the final period with Rivermen feeling energized after the Wisely goal shortly before intermission. The third period started with the puck spending a majority of the time in the Pensacola zone but the Peoria team unable to put any shots past the Ice Flyer netminder. Momentum shifted a little and Pensacola was able to spend considerable time in the Peoria zone when Rivermen captain Hagaman made a mistake on a puck clearing attempt and missed the glass, being called for Delay of Game and putting Pensacola on the power play. The Ice Flyers did not let this chance go, with Weiland Parrish earning his second goal of the playoffs. Less than ten seconds later, Alec Hagaman was able to get the puck from defenseman Lordanthony Grissom and move up ice quickly but was taken down by Ice Flyer defenseman Seth Ensor with Peoria forward Jordan Ernst following and picking up the puck and firing a rocket into the net. The Pensacola bench complained that the puck never actually went into the net, even after the goal light had been illuminated; after a review among all of the officials, the discussion moved to the goal judge. Shortly later a good goal was signaled with the Ice Flyer bench in disagreement. Less than two minutes later, the home team was called for Too Many Men on the Ice, second time in two nights giving the Ice Flyers another man advantage opportunity. A minute later Pensacola would pull their goalie to make it six on four with Peoria killing off the penalty. Less than one minute later, Grissom was called for Interference for another man advantage for Pensacola. The Peoria penalty kill probably played their best of the series to end the game, while the defensive core would admit this game was one of the weaker performances. At the final buzzer, the Ice Flyers were not able to finish Peoria off, dropping the elimination game 4-2. After the three game series, the Ice Flyers were leading the SPHL President Cup playoffs with 38.9% success on the power play while Peoria was last on the penalty kill at 61.1%. Peoria will need to improve their PK play moving to the second round, while their power play ranks third at 21.4%. With one game remaining in the playoffs between Knoxville Ice Bears and Roanoke Rail Yard Dawgs, Peoria’s next opponent is not yet known.