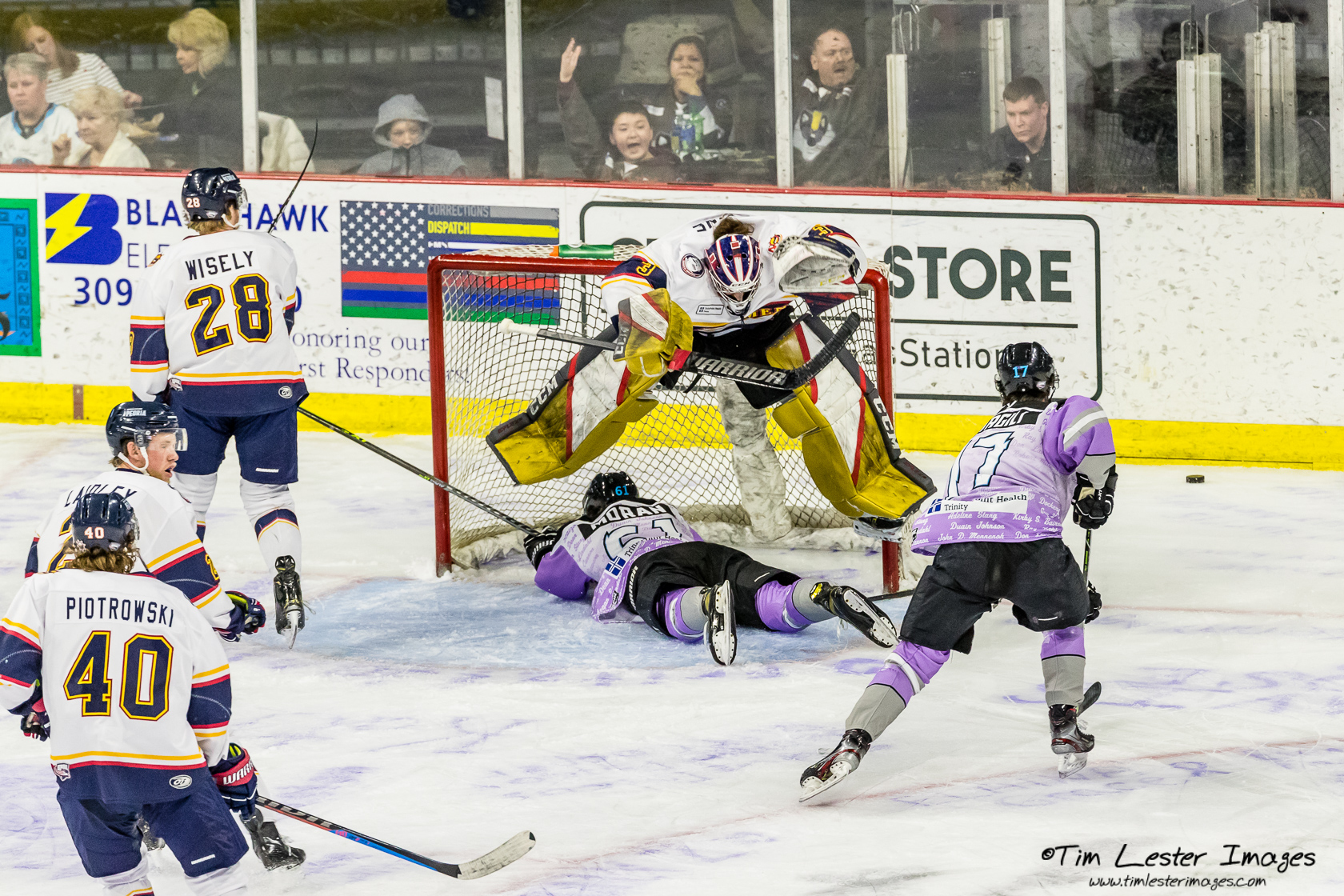 The Quad City Storm welcomed their nearest competitor the Peoria Rivermen on Saturday, for the Hockey Fights Cancer night.

MOLINE, Ill. – The Quad City Storm welcomed their nearest competitor, Peoria Rivermen, to the TaxSlayer Center for another round of the War on 74 series. Normally these two teams produce a physical game with a number of penalties being normal. This was the ninth meeting of this season, with Peoria leading the series 5-4 and six of the games separated by one goal. The battle this evening required extra time to determine the winner of the two points.

The Storm and Rivermen spent their Friday evenings as visitors against other Southern Professional Hockey League (SPHL) teams with both getting wins and neither team appeared to be lacking energy during the first period on Saturday evening.  The Storm were wearing special jersey’s and the ice was covered with  messages along with names of loved ones during their annual Hockey Fights Cancer night. Peoria was able to put the first puck in the back of the net with Marcel Godbout using the Storm defense to hide his quick release from just above the right hash mark in the slot. Storm goalie Kevin Resop was very slow to respond to the wrist shot by Godbout, an indication that his defense prevented him from seeing the puck. The opening frame produced a total of four penalties, two from each team with Storm Center Tommy Stang creating a dilemma for head coach Dave Pszenyczny. Stang took a Verbal Abuse of Official 10 minute misconduct penalty shortly after being released from the box for a slashing call. Pszenyczny decided to have three full lines of offense with three lines of defense for this game, so the bad penalty required a mix-up of lines for most of the middle frame.

The second period did not yield any goals and only a single interference infraction by Rivermen forward Cody Dion, both teams playing a little cautious not wanting to give up any odd man rushes.  The third frame was similar to the second, when Peoria’s Dion took the only penalty of the period and the Storm took advantage of the power play earning their only goal of the game. Quad City forward Marcus Ortiz gathered the puck in the left corner, skated just above the goal line along the boards and put a bad angle wrist shot past Rivermen goalie Eric Levine. Levine had played a good game until that goal but finished strong with a total of 34 saves. The third period was the only stanza where the Rivermen outshot the Storm, 10-8 and it was the only frame when the visitors had double digit shots on net. With the game tied 1-1 after three periods, the three on three overtime period was completed in 39 seconds when all three Peoria players moving the puck quickly off a shot rebound; then a final shot by captain Alec Hagaman getting the game winner, earning his 22nd goal of the season. The Quad City crowd of 3218 were stunned and remained quiet, with the Rivermen’s 2-1 victory.