The Quad City Storm returned to the Peoria Civic Center for the second time this season to face the Peoria Rivermen. 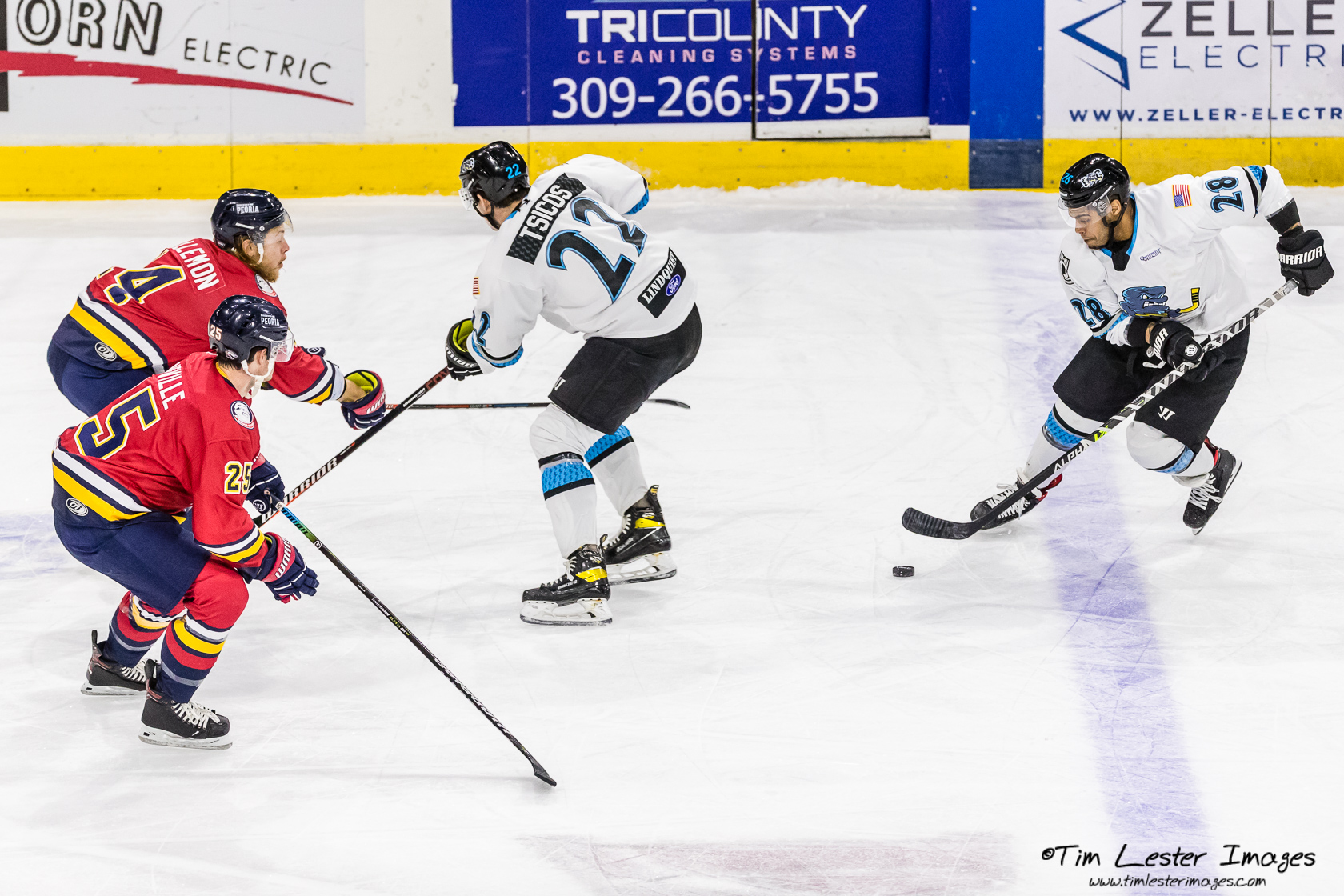 PEORIA, Ill. – The Quad City Storm returned to the Peoria Civic Center for the second time this season to face the Peoria Rivermen, who they have met in Quad City five times this season.

This was the Rivermen’s third home game of the weekend, while Quad City was playing their second road game over the past three days. The final score of 7-4 to the Rivermen, was not indicative of the close action for the initial couple of frames. It was more of a chess match between Rivermen head coach Jean Guy Trudel and his student and former player Dave Pszenyczny on the opposite bench.

Peoria fans had reason to be excited for another offensive night from the Rivermen, after Storm center Connor Fries received a tripping call 48 seconds after the initial puck drop. The Rivermen were unable to take advantage of this early power play, as the Storm took control of the game early with two goals in the opening frame.  Peoria managed to get on the scoresheet with less than two minutes left in the period.

Quad City defenseman John Zimmerman received a delay of game penalty at 2:34 into the second. Peoria would capitalize on this power play opportunity when Alec Hagaman was fed the puck in the low slot with a one-timer into the net to tie the game. In the middle of the frame, with Storm defenseman Joe Sova sitting in the box for tripping, the Rivermen scored again on the power play with 5 seconds left before Sova would be allowed to leave the box. The Rivermen’s Nick Neville was able to earn this power-play goal, as it was obviously Peoria plan to use their defenseman more on the offensive end of the ice with good rotation of wings on the blue line. This would be Neville’s first goal of the season plus he would add a second in the game early in the third period.

Period one and two had a total of five penalties between both clubs. That would change in the third when both teams added another 12 minors to the scoresheet. Storm centers Connor Fries and Tommy Stang, both with three minors each, while Rivermen’s Dale Deon had two minors in the game. Peoria would score on two of their man-advantage opportunities and Quad City would have one of their own.  In the game’s power plays, the Storm finished 1 for 5 while Rivermen were 4 for 6. When Peoria goalie Eric Levine was called for hooking with 3 minutes left in the game, Quad City pulled their goalie for a 6 on 4 advantage and were able to score on this opportunity, their only goal of the final frame. Twenty-two seconds later, with the Storm net empty once again, Rivermen captain Alec Hagaman was able to score on the empty net, his 17th goal of the season. The Storm out shot the Rivermen 27-24 but were outscored in the end. The teams will meet again at the Peoria Civic Center next Friday.