The Peoria Rivermen returned to the Peoria Civic Center Sunday for their third game in three days, against the Quad City Storm. 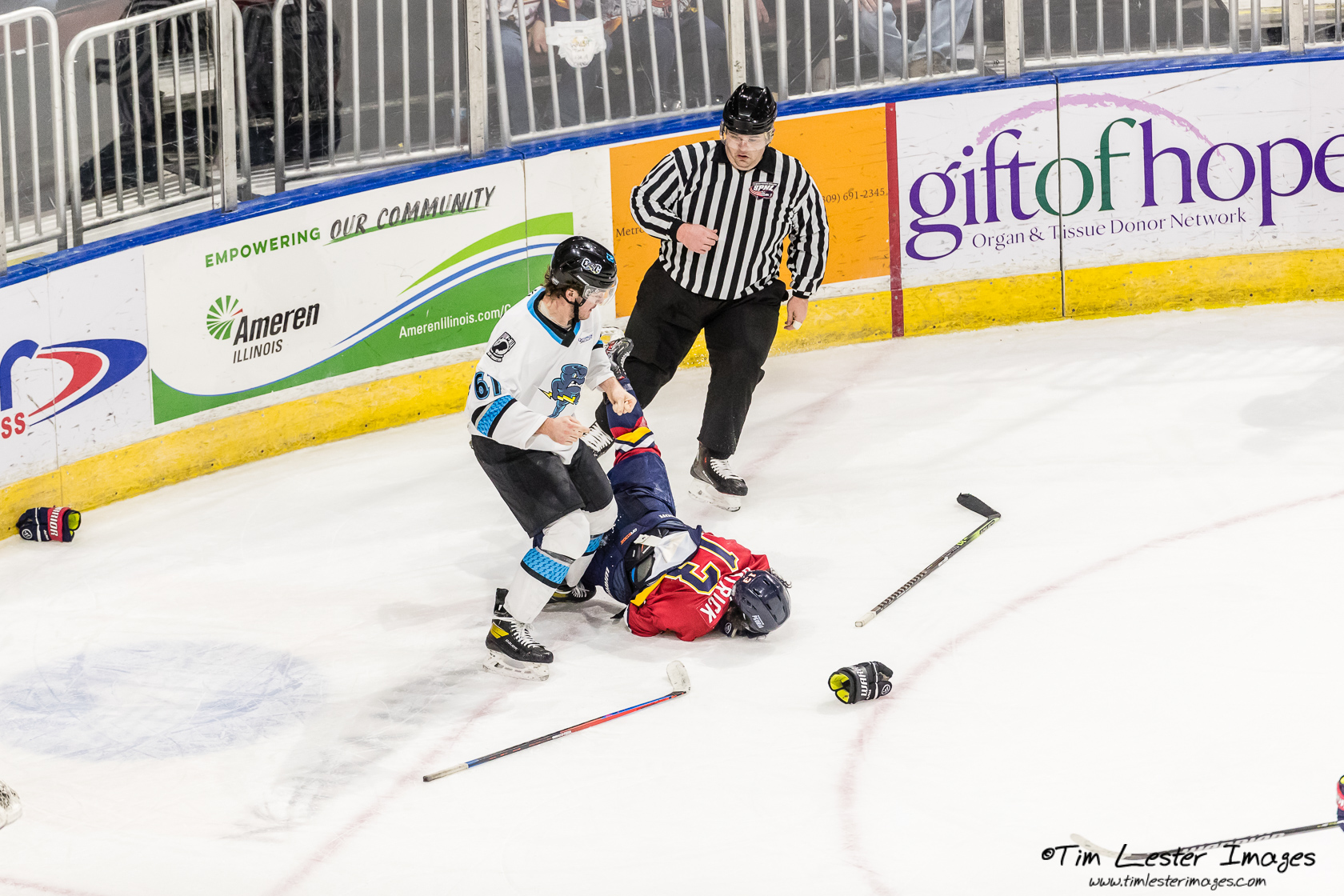 PEORIA, ILL. – The Peoria Rivermen returned to the Peoria Civic Center for their third game in three days, with the rubber match with Quad City Storm after earning an Overtime win the night before in their home and home weekend series. Peoria entered the game five points out of second place with seven games remaining in their season, hoping to close the gap to Knoxville.

Emotions ran high during the previous nights game, which was the Storm’s final home game of the season, the first period was calm with few penalties called, the same crew working all three Rivermen games. Offense was the theme of the first period, while both teams seemed to struggle in their defensive zone and both turning over the puck numerous times in the neutral zone stopping their attack. The previous nights game yielded one power play goal between both teams in five attempts, on this night the teams faired a little better with three power play goals on nine attempts. Peoria was held to only one power play goal in the two games against the Quad City team. Rivermen goalie Eric Levine was able to reach a milestone in his professional career by earning his 100th win the night before, so he was given the night off. While Peoria failed to score on the power play, their offense was not held in check with the home team scoring nine goals in the three periods while giving up four, with Jack Berry earning his second win of the weekend. Peoria forward Alec Baer earned a hat trick while newly signed forward Ben Assad continued to impress with his first professional goal scored, in addition to having three helpers over the weekend. Storm defenseman Darick Louis-Jean scored his first goal for the team to put a little bright spot on the evening.

As expected the emotions from the previous night, along with the scoring by the home team created some friction between the opponents and seemed to boil over in the second period when 6′-1″ Storm forward Michael Moran tossed 5’8″ Rivermen forward Ryan Patrick to the ice face first during an altercation. Words were shared between both teams and ultimately Moran earned 21 minutes and a Game Misconduct for his actions. Less than four minutes into the third period, gloves were dropped again with matches between Peoria forward Mitchell McPherson and Quad City Taylor Pryce which started a second bout between Storm’s Tommy Tsicos and Rivermen captain Alec Hagaman, with the later pair earning Game Misconduct’s for Second Altercations. With three players receiving Game Misconduct’s, both teams settled down a little with no fights to complete the game, will this trend continue as both teams play two more games in Peoria next week. While Peoria earning a big win, head coach Jean-Guy Trudel during his post game talk told the team “It’s a win but we won ugly, with poor defensive play in the 60 minutes”, for the Rivermen to succeed in the playoffs they will need to clean up the play in their own zone. After a short post game celebration, where the War on 74 trophy was presented to the team, players joined their fans for a post game skate. Up next, the Rivermen have four games remaining in the regular season over two weekends; each weekend facing familiar foes Vermillion County and Quad City.