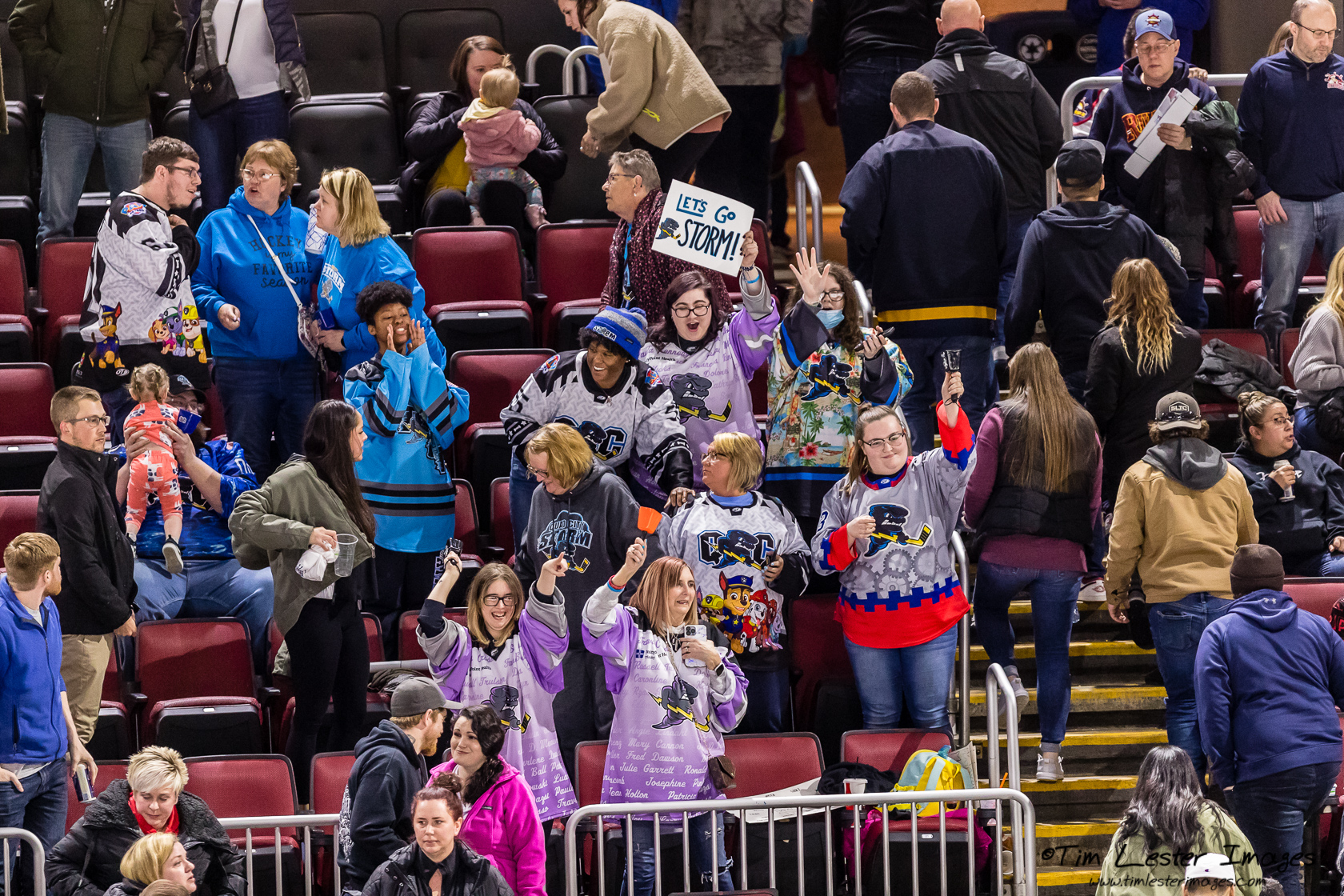 PEORIA, Ill. – The Peoria Rivermen players and fans wanted revenge against the Quad City Storm, who broke Peoria’s consecutive home win streak the previous weekend. The game was Fan Appreciation Night with a team poster giveaway, team autograph session post-game, and special jerseys honoring the 1990-91 Rivermen team that won the IHL’s Turner Cup and a professional hockey record 18 straight games that season. Like last week, the Quad City Storm had other plans for the home team.

Quad City started fast and furious, clearly out-skating the Rivermen for the majority of the game, almost as if they had another gear. The Storm spent most of the period inside the Peoria zone from the initial faceoff. Storm defenseman Darick Louis-Jean got this second goal of the season just after the one-minute mark; ironically, both goals have been against Peoria. Storm head coach Dave Pszenyczny appeared to use a similar game plan to last weekend, causing Peoria to struggle to get out of their zone and create turnovers in the neutral zone. Quad City outshot Peoria for two-thirds of the initial frame, with Peoria finding some energy late when Storm forward Ben Duperreault was sent to the box for tripping. Nearly the end of the power-play; Rivermen forward Marcel Godbout earned his 33rd goal of the season; Godbout is leading all rookies in the SPHL in goals and power-play goals. Teams entered the locker rooms at a 1-1 tie, but the home team was outplayed while the shots on goal were nearly the same, Peoria leading 7-6.

The second period was similar to the first, but with the Peoria defense pinching in the offensive zone too many times, allowing odd-man rushes. If you looked at the game report, it appears to be all Quad City since they have all the entries, one penalty by Louis-Jean, and goals by Connor Fries, Marcus Ortiz, and Taylor Pryce – all Storm goals coming off rebounds from Peoria goalie Jack Berry with poor support from the Rivermen defense. The Storm outshot the Rivermen 11-6 in the middle frame.

The Peoria fans hoped for a spark to the team during intermission, one change made to start the third was that Eric Levine moved into the net. The Peoria lines were changed up over the second and third periods, with mostly two lines playing in the third period. To add insult to injury, Quad City ran a puck keep away game with Peoria, and most of the period was spent moving the puck but not taking shots. At the 4:27 mark, Storm leading scorer Shane Bennett found the back of the net on a shot that appeared to surprise Peoria goalie Levine. Penalties were common the remainder of the game, with seven charged to the home team and five to the visitors. The Storm had a total of two shots on net in the third period, while Peoria was able to put 11 shots on Quad City goalie Kevin Resop. While the 3100 plus in attendance were hoping for multiple fights, only one occurred in the three periods. Just like the previous weekend, the home team fans left their team’s final regular-season home game by witnessing the visitor earning the win.

This was the final regular-season game for the Quad City Storm; they will finish in fifth place and earn their first trip to the SPHL playoffs. Peoria will travel to Vermilion County for their final game, still fighting for second place in the regular-season standings with Fayetteville Marksmen and Huntsville Havoc.