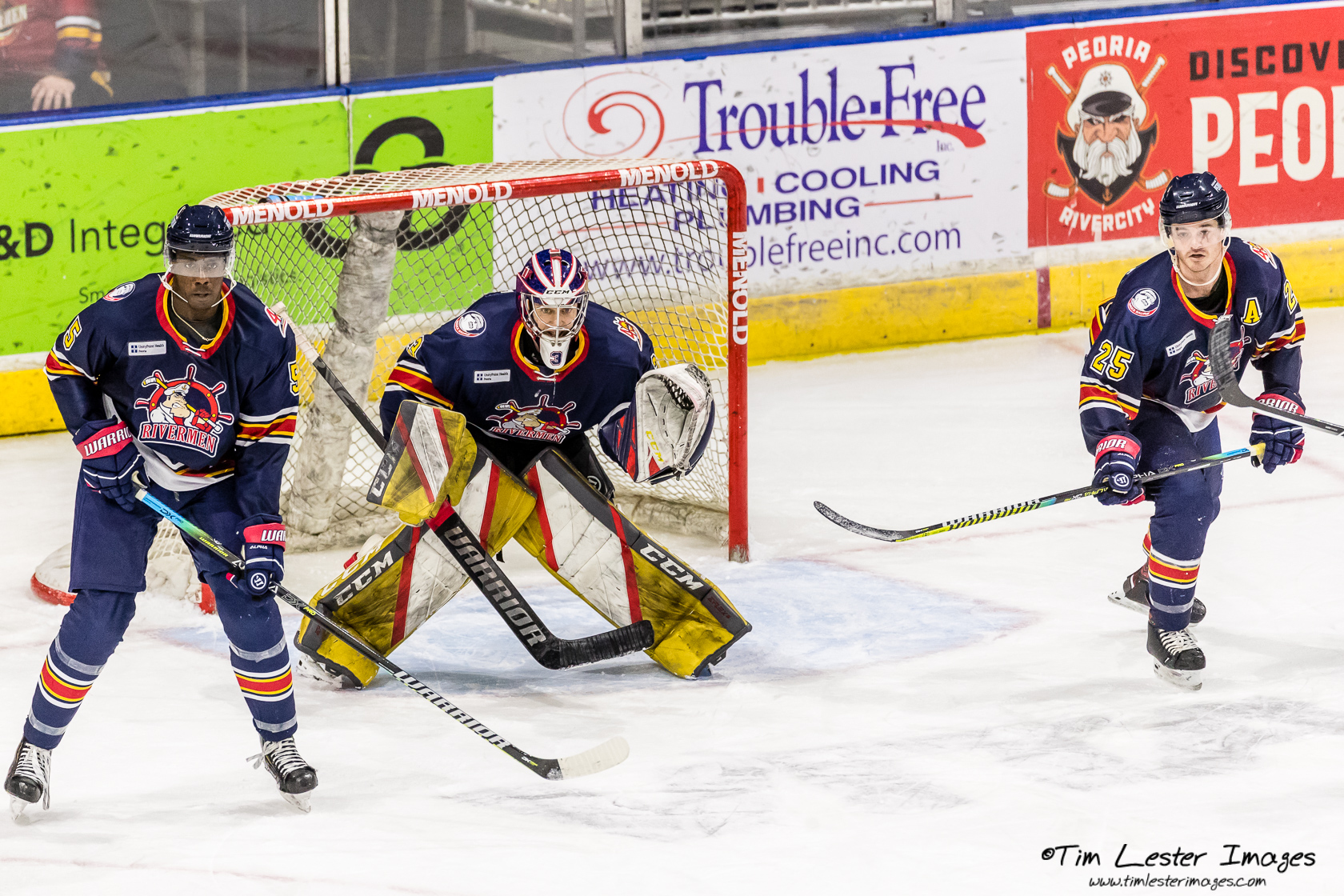 The Roanoke Rail Yard Dawgs ventured into the former play ground of their head coach, for a rare Thursday night game against the Peoria Rivermen.

PEORIA, ILL. – The Roanoke Rail Yard Dawgs ventured into the former play ground of their head coach, Dan Bremner, for a rare Thursday night game at the Peoria Civic Center arena. This was Roanoke’s first trip to Peoria this season but the third match between the teams, playing in Roanoke on January 7 and 8 – the teams splitting the set there.

The game started with penalty just after one minute into the game from Peoria Rivermen forward Mitchell McPherson, getting called for high sticking. The teams appeared they were attempting to determine the play of their opponent, Rail Yard Dawgs were displaying their physical play as the Rivermen showed speed into the neutral and their offensive zone. Roanoke’s Nick DeVito started the scoring at 4:42 into the first frame, which helped quiet the 1700 fans in attendance. The arena erupted less than two minutes later when newly signed defenseman Lordanthony Grissom scored his first professional goal; in his first pro game. Grissom was able to put a buzz in the Peoria Civic Center, with many fans excited how he played the back end, looking solid at defense while making a presence with physical play. Forward Ryan Patrick, another recent Peoria signing, was able to pick up his first helper of season during his second game with the Rivermen. Both players seemed to energize the Peoria bench and the pace appeared to pick up. In the later half of the first frame, Peoria forward Mitchell McPherson was able to find the back of the net. Less than one minute later, Rivermen defenseman Austin Wisely was able to score his third goal of the season. This was followed by the game winning goal by new comer Grissom a few minutes later.

The second period scoring started early, at the 1:35 mark when Roanoke’s CJ Stubbs was able to beat Rivermen goalie Eric Levine. Less than six minutes later, Roanoke cut the lead to one after Mac Jansen scored. A few minutes later Peoria’s Alec Baer stretched the lead again to two goals. The score would remain 5-3 until late in the third period when Roanoke pulled goalie Austyn Roudebush for the extra attacker – Rivermen Marcel Godbout was able to close out the game with an empty net goal. While the first and third periods only had a single penalty each; the second period had both teams receive three penalties each. Both teams had two power plays but neither was able to capitalize on the man advantage.