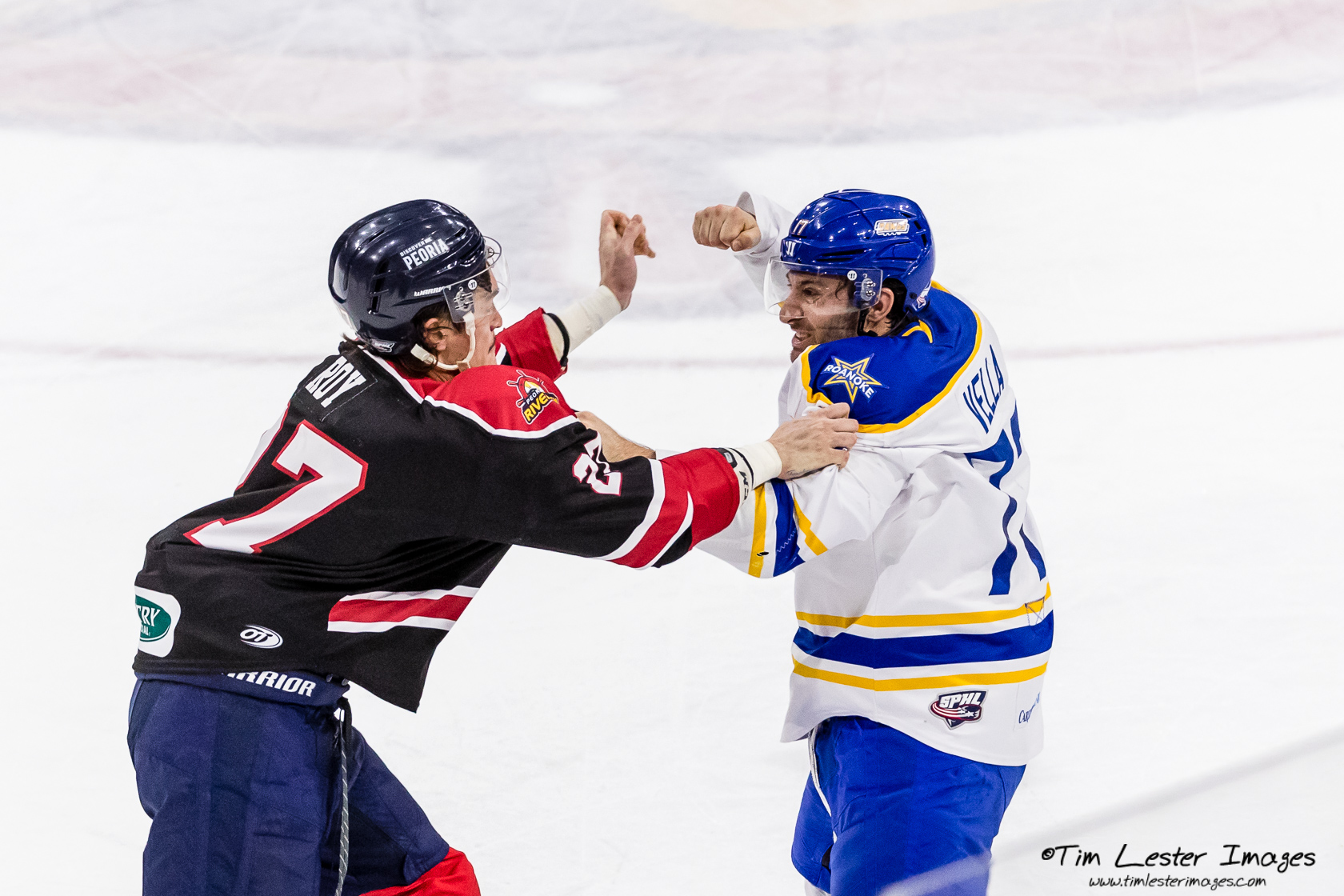 The Roanoke Rail Yard Dawgs and Peoria Rivermen played for the second night of their three game series at the Peoria Civic Center arena.

PEORIA, ILL. – The Roanoke Rail Yard Dawgs and Peoria Rivermen played for the second night of their three game series at the Peoria Civic Center arena. Peoria is currently within one point of the top spot in the SPHL while Roanoke is hoping to keep pace to earn a playoff slot.

Similar to Thursday night action, less than two minutes into the game the first penalty was called except this evening both teams earned one for an early 4 on 4 action. Both teams started more physical play compared to the previous night, Peoria was able to score on their first power play when Brant Sherwood was called for Slashing with Mitchell McPherson starting the scoring for Peoria. A few minutes later McPherson added a second goal with Rivermen forward Mike Laidley getting the third goal of the period. Roanoke would replace goalie Henry Dill after the first period when he gave up 3 goals on 7 shots.

The first period had a total of four penalties total, with the previous nights game having a total of eight penalties between both teams. Then the second period started, at the 2:01 point emotions ran high and each team was accessed four penalties with Roanoke’s Travis Armstrong and Peoria’s Sacha Roy each receiving 5 minute Majors for Fighting. While this fight was ending, Roanoke’s Dillon Hill and Peoria’s Austin Wisely each received two Roughing calls plus 10 minute Misconducts for Continuing Altercation. Each team would add an additional minor call each before Rivermen forward Alec Baer would score on the man advantage. After the final buzzer to end period two, Rivermen goalie Eric Levine was still unhappy with Rail Yard Dawg’s Dillon Hill for attempting to put the puck in the net after an offsides call on Roanoke a few minutes earlier. Levine skated toward Hill to express his feelings, Roanoke goalie Austyn Roudebush expressed his feelings by hitting Levine and receiving a roughing call near the Roanoke bench. Emotions overloaded at this moment with Peoria’s Sacha Roy and Roanoke’s Chris Vella comments toward each other causing a fight between them – each received Fight Major penalties and Fighting (Not during periods of game), which is a 10 minute Game Misconduct. The linesman and referee spent the next few minutes attempting to get the two teams back to their respective locker rooms.

The third period appeared to be one of survival, with both teams increasing the physical play and bending the rules of hockey. Both teams amassed 15 total penalties with five different players receiving 10 minute Misconducts. When the final horn sounding, both teams combined for a total of 143 penalty minutes. Normally you would think of a low shot count with this high of penalty total but Roanoke out shot Peoria 29 to 16.