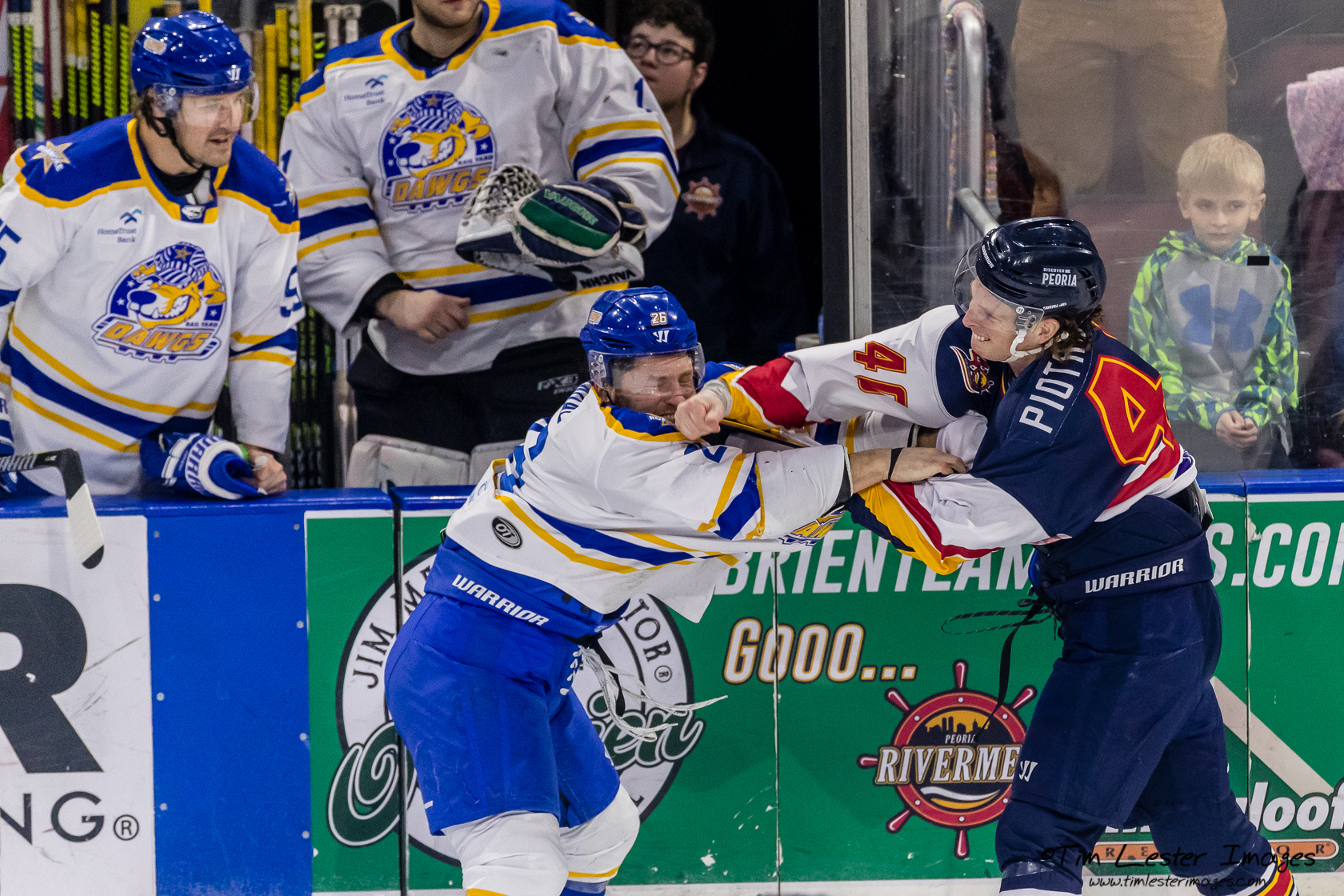 The Roanoke Rail Yard Dawgs and Peoria Rivermen had a day off between games two and three, for their game on Sunday.

PEORIA, ILL – The Roanoke Rail Yard Dawgs and Peoria Rivermen had a day off between games two and three, which was most likely a good thing with the high penalty count in periods two and three a couple of nights previously – so the question was, what type of game would this be?

Roanoke would start their third different goalie in as many games against the Peoria Rivermen, this time newly signed Mac Berglove. The Rail Yard Dawgs won the opening faceoff but a quick forecheck by Peoria forwards caused a turnover in the Roanoke defensive zone which led to Alec Hagaman with a goal eight seconds into the game for Peoria. On the next faceoff at center ice, Rivermen forward JM Piotrowski and Rail Yard Dawgs Josh Nenadal dropped the gloves for an extended fight in front of the Roanoke bench. Less than 50 seconds later, Peoria’s Marcel Godbout was left alone near the net and was able to put the Rivermen on the scoresheet again. Godbout was able to add another tally a couple of minutes later to get the home team crowd of 2600 energized. The fans appeared to arrive a little later than normal, possibly due to the family fun events going on pre-game, so a number of fans were shocked to see a 3-0 lead just after the three minute mark of the first period. A few seconds later Roanoke’s Jordan Fogarty was able to score his first goal of the season and quiet the fans a little.

Both teams learned quickly that referee Mark Dungan was going to attempt to control the game and calling numerous penalties. The first period had a total of 13 penalties on both teams combined. The third period topped that total, with a combined 17 penalties called. When the game was completed, 168 penalty minutes were recorded for both teams – most likely some league response to both teams will be coming after the large number of penalties over the three game set. While Roanoke appeared their desire was to take out their anger against the Peoria players, the Rivermen looked to run the score up on their foes. After 60 minutes of play, the score ended at 8-2 for the home team, with forward Marcel Godbout earning a hat trick.