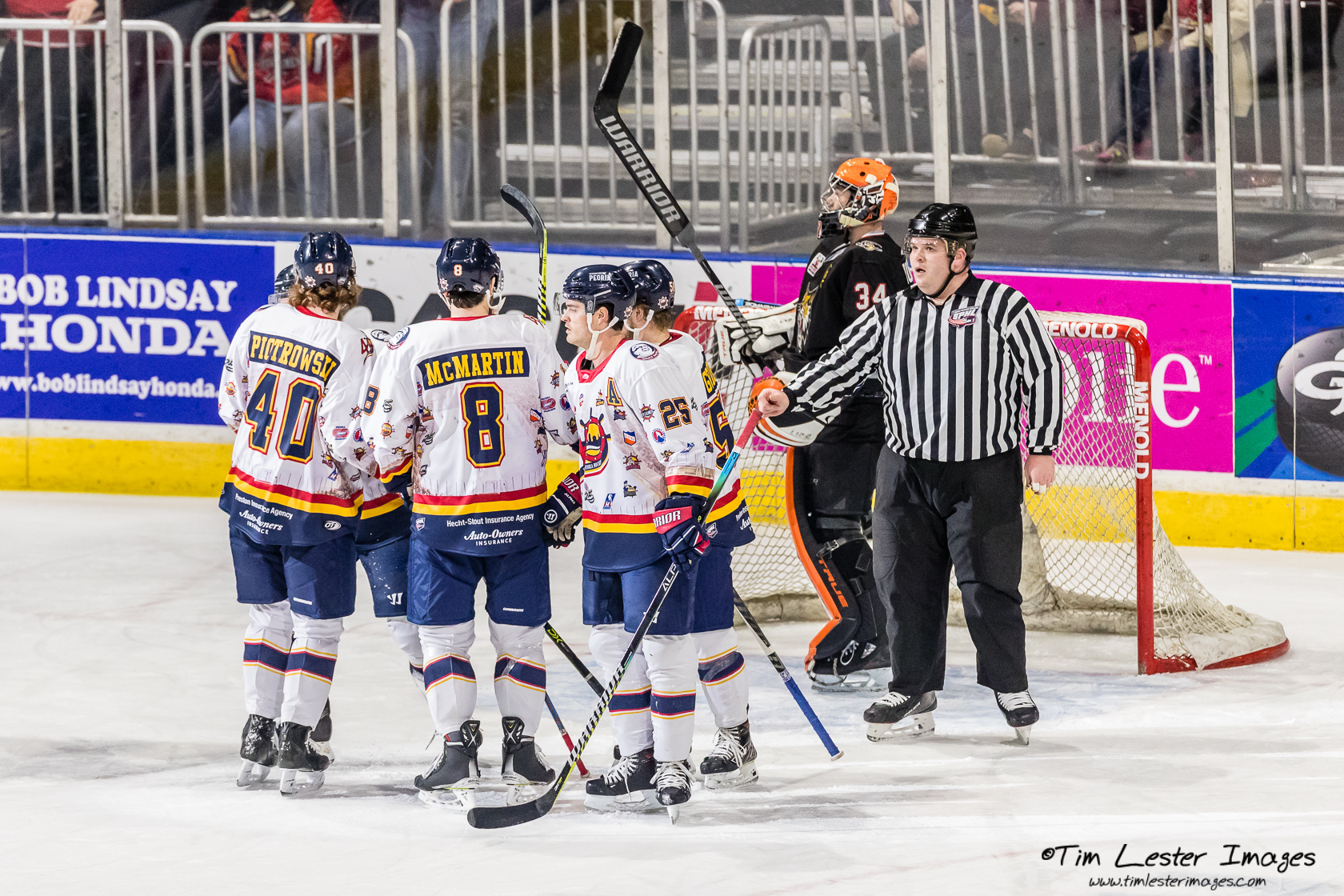 The Peoria Rivermen were looking to rebound after a loss at in their last outing, and were sporting specialty themed jerseys to commemorate their 40th season in professional hockey.

PEORIA, Ill. – Against the Vermilion County Bobcats the Peoria Rivermen were looking to rebound after a loss at Roanoke in their last outing, which was only the second loss in previous ten games. Peoria was also wearing special jerseys to commemorate their 40th season in professional hockey at the Peoria Civic Center; displayed were logos from each of the leagues played in plus team logo designs. The Rivermen were juiced up as the scoring was plentiful with Bobcats being outscored by two goals every period by the home team.

Peoria opened the scoring on the power play when Alec Baer scoring his ninth goal of the season by putting a rebound past the outstretched pad of Bobcats goalie Ben Churchfield. Before the period had ended, Rivermen forward Mike Laidley added two more goals while Bobcats were put on the board by center Kyle Stevens. Peoria scored the first two goals again in the second period, both by Rivermen captain Alec Hagaman, the earlier goal being on the power play. Hometown Rivermen center Nathan Chasteen was able to get his first goal of his short SPHL, deflecting a shot from defenseman Austin Wisely. Vermilion County’s Houston Wilson continued his goal streak against Peoria, scoring shortly after midway point in the second.

Peoria continued the offensive dominance in the third, with Alec Hagaman and Mike Laidley both recording goals and hat tricks for the home team. While those were the only goals scored, Peoria continued to bombard Bobcats goalie Joe Sheppard with pucks, after Sheppard had replaced starting goalie Churchfield during the second media timeout in the second frame. In totals, the Rivermen out shot the Bobcats 48-16 for a 8-2 final score, with 15 helpers recorded by Peoria and went 3 for 4 on the power play. All four of the Rivermen players who were born and raised in the Peoria area were on the scoresheet by the end of the second period, testament to the influence head coach Jean Guy Trudel along with numerous former Rivermen in the hockey programs in Peoria area.